Mrs. Ellen Creeden, wife of Timothy Creeden, died yesterday morning at her home, a short distance north of this village. She was 65 years of age. A husband and seven children are left to mourn ?. The funeral will be held from Sts Peter and Paul Church, Reading. Wednesday morning.

This obituary was published in the Cincinnati Enquirer on July 7, 1891 under a heading of news for Lockland, Ohio. The scan is from Newspapers.com. Ellen would have been born around 1826 if her age is correct in the obituary. I've wondered if her husband Timothy Creeden was related to my Creedens. I've seen a picture of him on several Ancestry.com trees and the resemblance to my Timothy Creeden is pretty remarkable. Ellen's husband would've been about the right age to be a brother or cousin to my Timothy's father Patrick Creedan. I'd love to hear from anyone researching Ellen and Timothy.
All articles on this blog are © Copyright 2018 by Kathryn - Posted at 2:14 PM 0 comments

A digitized copy of the 1916 Farm Journal of Mercer County, Ohio is available on Internet Archives. The Farm Journal has names, addresses, occupations and some other information on Mercer County residents, so it can be a good source of information between the census years of 1910 and 1920. 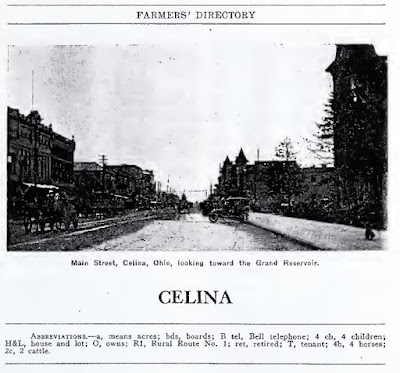 The directory for the town of Celina starts on page 17 and includes a picture of Main Street and an explanation of the abbreviations used. The directory entries include information on occupations, number of children, horses and cattle, and whether a person owned or rented their home.


The entries for the Creedens in Celina showed my great-grandparents Charles and Anna Creeden were tenants at 329 E Fulton St. and had two children living with them. Charles' occupation was listed as laborer. His mother Mary owned her home at 428 W. Fulton St. and two of her children were living with her. Her daughter Ida was working as a seamstress and her son Josh was working as a laborer. Charles' brother Dan was also listed with his wife Lenna as home owners on 429 W. Livingston St.

The abbreviation list shows "B tel" stood for Bell telephone, but it doesn't explain what "Ind tel." meant. I would guess that indicates they had a phone of some kind since there are also entries with no "tel" reference.


The Celina entries for the Pulskamps show my great-grandparents George and Mary Pulskamp owned their home at 611 N. Walnut St. and had six children living with them. George was editor of the Der Bote, a German newspaper and an advertisement for the newspaper was also in the Farm Journal. Interesting that the Der Bote ad has a two digit phone number, while the individual entries didn't include a phone number.