The 52 Ancestors prompt for this week is "Cemetery". Do you have a favorite tombstone of one of your ancestors? Maybe you could share how you found where an ancestor is buried or a clue that you got from a tombstone or cemetery records.

I live far away from the cemeteries where my ancestors are buried and haven't visited any of them. A few years ago, the Genealogy Society of Mercer County, Ohio offered to take tombstone photos for a $5 donation, so I took them up on getting a photo of Timothy Creeden's tombstone. Timothy is my 2x great-grandfather was was the first ancestor that I researched.

My family got a big surprise when we saw the size of the monument. My father had never seen it even though he grew up and attended the church there. I thought maybe one of Timothy's children had put up the monument, but later found probate records showing that his wife Mary purchased it. 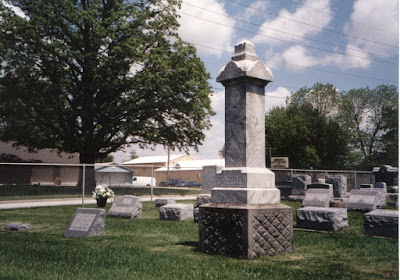 The grave is located in St. Mary's Catholic Cemetery in Celina, OH and has the following inscription:

The inscription helped to confirm Timothy's date of birth in 1846 and the date of his death in 1899. Timothy's wife Mary Ann Matson is also buried there.

#52Ancestors is a series of weekly family history prompts developed by Amy Johnson Crow.
All articles on this blog are © Copyright 2018 by Kathryn - Posted at 6:03 PM 0 comments

I haven't made any huge discoveries through tax records, but they can help with locating ancestors in between census records. I ran across an interesting newspaper article on taxes due in Queen Anne's County, Maryland in 1811. The article mentioned several surnames that run in my family and the plot of land called Hawkins' Pharsalia.  I've posted a few times about Hawkins' Pharsalia as parts of it were owned and inherited by my Councill family.

The information below is from the newspaper article published on the 12th of Februrary, 1811 in the Republican Star of Easton, MD. I've transcribed the article and pulled out the references to Hawkins' Pharsalia and a few others with surnames that run in my family.

LYING and being in Queen-Ann's county, belonging to sundry persons, subject to the payment of County Taxes, whereon no Personal Property is found liable to the payment thereof: viz. 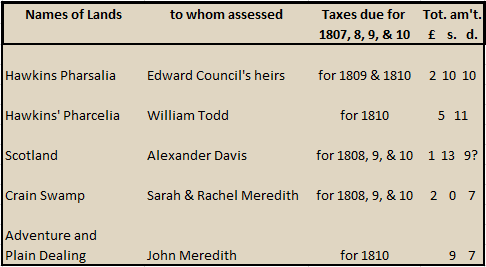 The person or persons holding or claiming any part of the above mentioned Lands, are hereby notified, that unless the above Taxes are paid (with the proportion of costs arising thereon, for advertising, & c.) within thirty days after the insertion hereof in the public newspapers--the same, or a part thereof, (as the case may be) will be sold under the direction of the Commissioners o the Tax of said county, for the purpose of satisfying said claims, under the Act of Assembly.
Per order, WILLIAM H. BLAKE, CLK. of the Commissioners of Tax for Q.A. County. January 12th, (22) 1811

After Edward Carey Councill's death, a Queen Anne's County Land Commission was formed in 1810 to determine how his land would be distributed.  The land was surveyed and found to contain 114 acres worth $7.50 an acre in 1810. The Land Commission denied Edward Councill's heirs' request to split up the land in 1811. At that point, Henry Councell bought it with the approval of Edward's sons and then sold it back to John Councill (son of Edward) in 1813. It's not surprising that taxes were overdue in early 1811 since the estate was still being settled.

After John Councill's death, his estate was divided between his widow Ann and sons Francis, William, John, James, and Thomas. When Ann died, a land commission sold the land in 1838 and the proceeds were divided between the brothers.

The article on tax records provided some nice extra documentation on the land owners in Queen Anne's County, in 1811, at least for the ones that still owed taxes! The full article is available on GenealogyBank.com.

#52Ancestors is a series of weekly family history prompts developed by Amy Johnson Crow.
All articles on this blog are © Copyright 2018 by Kathryn - Posted at 6:01 PM 0 comments