I've posted a few times now about a tract of land in Queen Anne's County, Maryland called Hawkins Pharsalia. The land was mentioned in several wills and land transactions involving my Councill family. By following how the land was passed down, I've been able to come up with possible ancestors for my 2x great-grandfather Francis Councill. 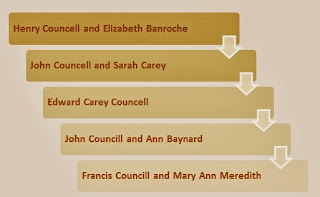 A Queen Anne's County Land Commission formed in 1810 determined how the land would be distributed after Edward Carey Council died. The results were recorded in Queen Anne's County Court book JB 1, pages 7 to 9 and the images are available on the Maryland.gov site. 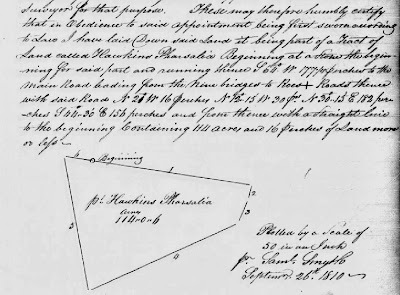 The land was surveyed and found to contain 114 acres worth $7.50 an acre in 1810. The Land Commission would not allow the land to be divided and the eldest son John took the land and agreed to pay for the shares owed to the other heirs.

In 1811, several Councells were involved in selling and buying the land. From Book STW 9, pages 447-449 on the Maryland Land Records site (mdlandrec.net).

So, at that point, the land had passed out of hands of the heirs of Edward Carey Councell. I don't know how the buyer, Henry Councell fits into the Councell tree yet, but he may have been the brother of Edward.

In 1816, a John Councell buys a section of Hawkins Pharsalia that Henry Councell bought in 1729.

This may be how some of the land went back into the hands of John Councell, son of Edward Carey Councell, but I can't be sure. In comparing the survey from John Councell's estate, it is a larger tract of land than the one from Edward Carey Councell's estate. However, Edward only inherited a portion of the land, while his brothers Samuel and James also inherited sections.

John Councill's estate was divided between his widow Ann and sons Francis, William, John, James, and Thomas. After Ann died, a land commission sold the land in 1838 and the proceeds were divided between the brothers. The information in Land Commission Book IT 1 named Elijah Councell as the guardian of the minor brothers and gave the dates when the minor brothers would reach the age of 21 and be paid their inheritance. With that information, I was able to fill in a few dates on my tree. The maiden names for Elizabeth Banroche and Sarah Carey came from trees on Ancestry.com, but I haven't seen any proof for them. This is my best guess at this point, based on information in the land, estate, and church records. 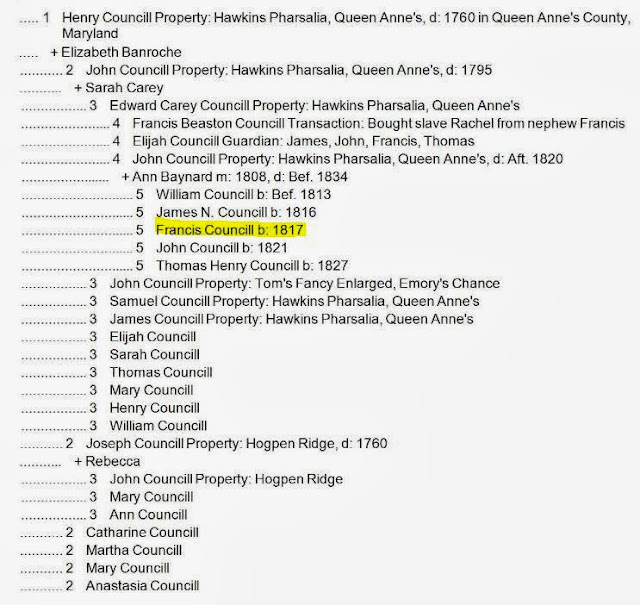 Thanks again to Heather of Leaves for Trees for her tip on using Excel for ancestor graphics.

Mappy Monday is a GeneaBloggers prompt where you can post map images and how they relate to your research or discuss other aspects of land ownership and your ancestor.
All articles on this blog are © Copyright 2018 by Kathryn - Posted at 5:00 AM