This may be the most informative obituary I've ever seen for anyone connected to my family! The obituary was published in the Clinton County Democrat in Wilmington Ohio on January 13, 1916. James Keefe's mother was Johanna Creedon and his brother Timothy Keefe was the executor of my 3x great-grandfather Patrick Creedan's will. While I don't know the exact relation to my Creeden family, the two families seemed close. The Keefes were mentioned as being related to Patrick Creedan's daughter Julia in her obituary published in 1918. 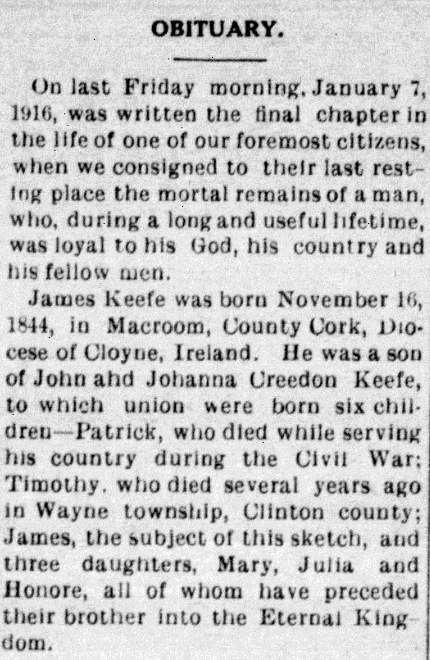 OBITUARY.
On last Friday morning, January 1916, was written the final chapter in the life of one of our foremost citizens, when we consigned to their last resting place the mortal remains of a man, who, during a long and useful lifetime, was loyal to his God, his country and his fellow men. James Keefe was born November 16, 1844, in Macroom, County Cork, Diocese of Cloyne, Ireland. He was a son of John and Johanna Creedon Keefe, to which union were born six children—Patrick, who died while serving his country during the Civil War; Timothy, who died several years ago in Wayne township, Clinton county; James, the subject of this sketch, and three daughters, Mary, Julia and Honore, all of whom have preceded their brother into the Eternal Kingdom. 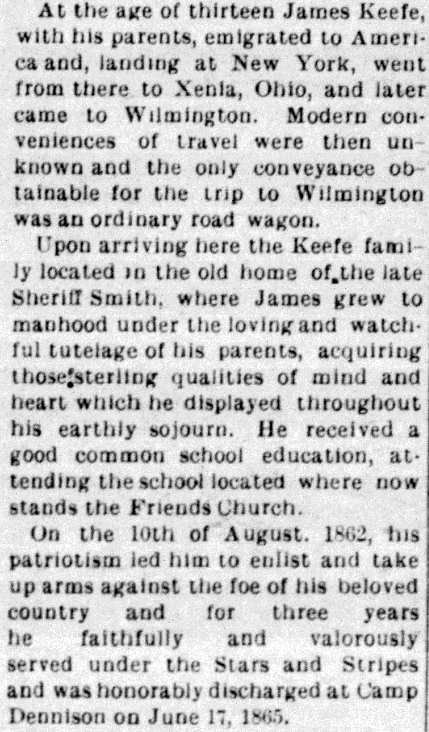 At the age of thirteen James Keefe, with his parents, emigrated to America and, landing at New York, went from there to Xenia, Ohio, and later came to Wilmington. Modern conveniences of travel were then unknown and the only conveyance obtainable for the trip to Wilmington was an ordinary road wagon. Upon arriving here the Keefe family located in the old home of the late Sheriff Smith, where James grew to manhood under the loving and watchful tutelage of his parents, acquiring those:sterling qualities of mind and heart which he displayed throughout his earthly sojourn. He received a good common school education, attending the school located where now stands the Friends Church. On the 10th of August. 1862, his patriotism led him to enlist and take up arms against the foe of his beloved country and for three years he faithfully and valorously served under the Stars and Stripes and was honorably discharged at Camp Dennison on June 17, 1865. 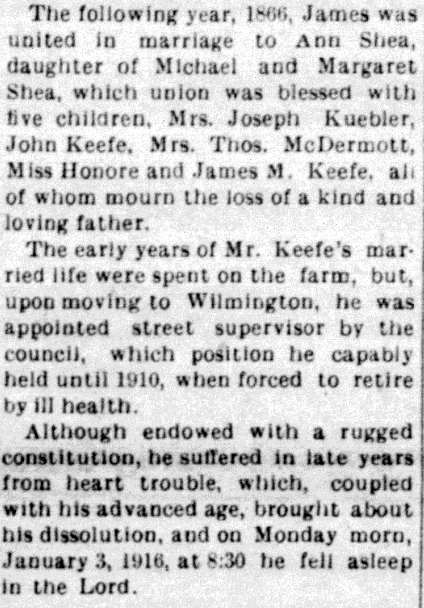 The following year, 1866, James was united in marriage to Ann Shea, daughter of Michael and Margaret Shea, which union was blessed with five children, Mrs. Joseph Kuebler, John Keefe. Mrs. Thos. McDermott, Miss Honore and James M. Keefe, all of whom mourn the loss of a kind and
loving father. The early years of Mr. Keefe's married life were spent on the farm, but, upon moving to Wilmington, he was appointed street supervisor by the council, which position he capably held until 1910, when forced to retire by Ill health. Although endowed with a rugged constitution, he suffered in late years  from heart trouble, which, coupled with his advanced age, brought about his dissolution, and on Monday morn, January 3, 1916, at 8:30 he fell asleep in the Lord. 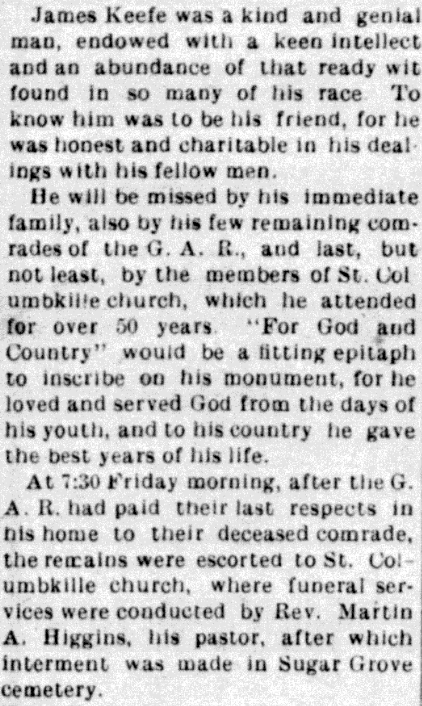 James Keefe was a kind and genial man, endowed with a keen intellect and an abundance of that ready wit found in so many of his race. To know him was to be his friend, for he was honest and charitable in his dealings with his fellow men. He will be missed by his immediate family, also by his few remaining comrades of the G. A. R., and last, but not least, by the members of St. Columbkille church, which he attended for over 50 years. "For God and Country" would be a fitting epitaph to inscribe on his monument, for he loved and served God from the days of his youth, and to his country he gave the best years of his life. At 7:30 Friday morning, after the G. A. R. had paid their last respects in his home to their deceased comrade, the remains were escorted to St. Columbkille church, where funeral services were conducted by Rev. Martin A. Higgins, his pastor, after which interment was made in Sugar Grove cemetery. 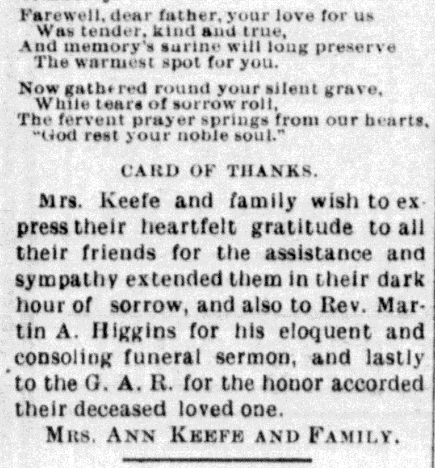 Farewell. dear father, your love for us
Was tender, kind and true,
And memory's surine will long preserve
The warmest spot for you.
Now gathered round your silent grave,
While tears of sorrow roll,
The fervent prayer springs from our hearts,
-God rest your noble soul."
CARD OF THANKS.
Mrs. Keefe and family wish to express their heartfelt gratitude to all their friends for the assistance and sympathy extended them in their dark hour of sorrow, and also to Rev. Martin A. Higgins for his eloquent and consoling funeral sermon, and lastly to the G. A. R. for the honor accorded their deceased loved one.
MRS. ANN KEEFE AND FAMILY.
All articles on this blog are © Copyright 2018 by Kathryn - Posted at 12:39 PM 0 comments

This obituary was published in the Clinton County Democrat on March 7, 1918. 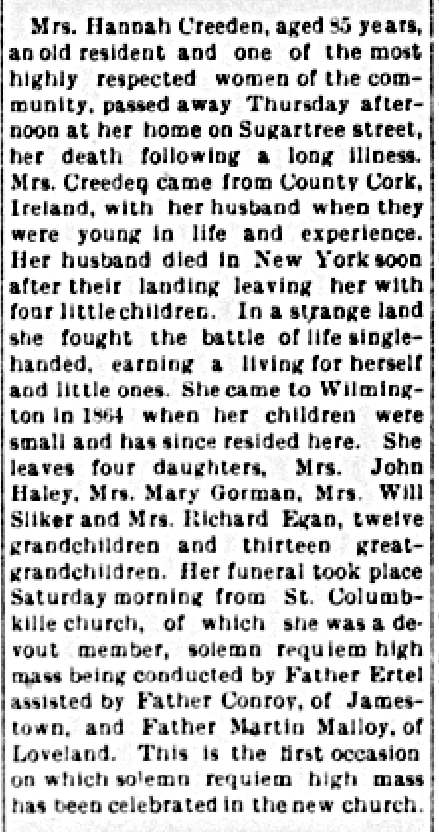 Mrs. Hannah Creeden, aged 85 years, an old resident and one of the most highly respected women of the community, passed away Thursday afternoon at her home on Sugartree street, her death following a long illness. Mrs. Creeden came from County Cork, Ireland, with her husband when they were young in life and experience. Her husband died in New York soon after their landing leaving her with four little children. In a strange land she fought the battle of life single-handed, earning a living for herself and little ones. She came to Wilmington in 1864 when her children were small and has since resided here. She leaves four daughters, Mrs. John Haley, Mrs. Mary Gorman, Mrs. Will Sliker and Mrs. Richard Egan, twelve grandchildren and thirteen great-grandchildren. Her funeral took place Saturday morning from St. Columbkille church, of which she was a devout member, solemn requiem high mass being conducted by Father Ertel assisted by Father Conroy, of Jamestown, and Farther Martin Malloy, of Loveland. This is the first occasion on which solemn requiem high mass has been celebrated in the new church.

I've always thought this was such an incredible story. Hannah's husband was Timothy Creeden and they were married in Clondrohid Parish, County Cork on Feb. 28, 1854. Hannah's maiden name was also Creeden. What the obituary doesn't mention is that her daughter Hannah (Mrs. Richard Egan) was born on the ship they came over on! Hannah and Timothy also had a son named Daniel who supposedly died during their voyage to the US.

I don't know the exact connection between this family and other Creedens in Clinton County, but I would guess that Hannah went from New York to Clinton County due to family ties. She must have been an incredible woman to raise her four daughters on her own after losing her husband and son.
All articles on this blog are © Copyright 2018 by Kathryn - Posted at 7:22 PM 0 comments

I've posted several times about the colorful military career of my great-grandfather's brother Edward Creeden. Edward enlisted in the US Army in 1904 from Salt Lake City, Utah. He listed his residence as Pueblo, CO and birthplace as Celina, OH.

In August 1917, Edward joined the Canadian Expeditionary Forces. The Canadian records showed that he was wounded in France in April 1918 and lost his right leg due to a wound from a shell fragment in Arras, France.

An article in the Celina Democrat published on July 26, 1918 details a letter he wrote to his brother Joshua during his recovery. I found the article on the Chronicling America site. 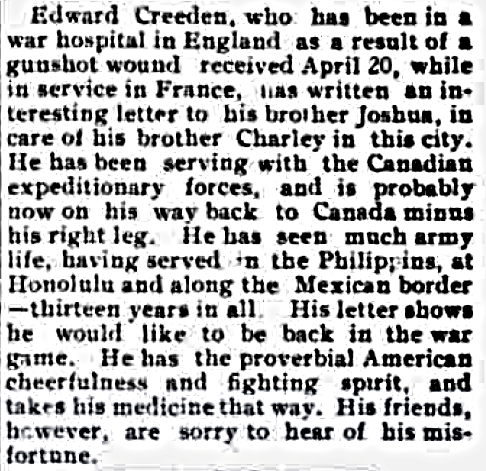 Edward Creeden, who has been in a war hospital in England as a result of a gunshot wound received April 20, while in service in France, has written an interesting letter to his brother Joshua, in care of his brother Charley in this city. He has been serving with the Canadian expeditionary forces, and is probably now on his way back to Canada minus his right leg. He has seen much army life, having served in the Phillippins, at Honolulu and along the Mexican border-- thirteen years in all. His letter shows he would like to be back in the war game. He has the proverbial American cheerfulness and fighting spirit, and takes his medicine that way. His friends, however, are sorry to hear of his misfortune.

I had wondered if Edward kept in touch with the family at all, so the article at least solves that mystery. It must've been quite a shock for them to get the news of his injury. I have a long list of places where Edward served, but I didn't know he served in Honolulu or the Mexican border.

I don't know if Edward got his wish to continue with his military service, but it seems unlikely. He was discharged from the Canadian forces as being medically unfit for duty in 1919. He listed his proposed next residence as St. Louis, MO, but I haven't found any records for him there so far.

A possible entry in the census places him in Sedgwick, KS in 1920 and from newspaper articles and his death certificate, I know he died in Newport, KY in 1937. I'm still trying to solve the mystery of what happened to Edward between 1919-1937.
All articles on this blog are © Copyright 2018 by Kathryn - Posted at 6:00 AM 0 comments