This obituary for Mary Catherine (Hagedorn) Gast was published in the Celina Democrat on November 12, 1915.  Mary Catherine was my 3x great-grandmother and was married to Mathias Gast. She was the daughter of Hermann Hagedorn and C. Maria Tebben. 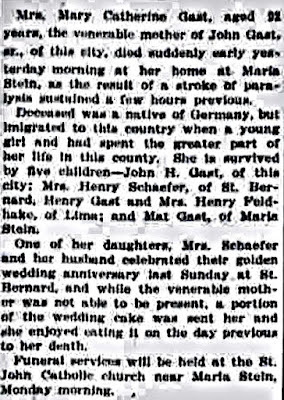 Mrs. Mary Catherine Gast, aged 92 years, the venerable mother of John Gast, sr., of this city, died suddenly early Saturday morning at her home at Maria Stein. as the result of a stroke of paralysis sustained u few hours previous.
Deceased was a native of Germany, but immigrated to this country when a young girl and had spent the greater part of her life in this county. She is survived by five children—John H. Gast, of this city; Mrs. Henry Schaefer, of St. Bernard,. Henry Gast and Mrs. Henry Feldhake of Lima; and Mat Gast, of Maria Stein.
One of her daughters, Mrs. Schaefer and her husband celebrated their golden wedding anniversary last Sunday at St. Bernard, and while the venerable mother was not able to be present, a portion of the wedding cake was sent her and she enjoyed eating it on the day previous to her death.
Funeral services will be held at the St. John Catholic church near Marla Stein, Monday morning. 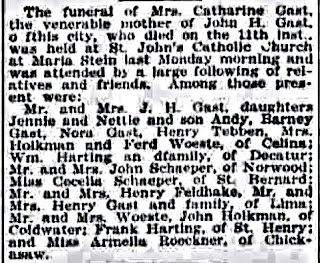 The above article on the funeral was published in the Celina Democrat on November 19, 1915:

The funeral of Mrs. Catharine Gast, the venerable mother of John H. Gast, of this city, who died on the 11th inst., was held at St. John's Catholic Church at Maria Stein last Monday morning and was attended by a large following of relatives and friends. Among those present were:
Mr. and Mrs. J. H. Gast, daughters Jennie and Nettie and son Andy, Barney Gast, Nora Gast, Henry Tubben, Mrs. Holkman and Ferd Woesta, of Celina; Wm. Harting and family, of Desatur; Mr. and Mrs. John Schaeper, of Norword; Miss Cecelia Schaeper, of St. Bernard; Mr. and Mrs. Henry Feldhake, Mr. and Mrs. Henry Gast and family, of LIma; Mr. and Mrs. Woeste, John Holkman, of Coldwater; Frank Harting, of St. Henry; and Miss Armelia Roeckner, of Chickasaw.

Images of the Celina Democrat are from the Chronicling America site.
All articles on this blog are © Copyright 2018 by Kathryn - Posted at 3:03 PM 0 comments