The 52 Ancestors prompt for this week is "Non-Population".

The federal census that we use in the US is sometimes comprised of more than one schedule. The one that we usually use is called the "population schedule." However, there are some censuses that have addtional schedules, such as:
- 1850-1880 Agricultural schedules
- 1850-1880 Industry and Manufactures schedules
- 1880 Defective, Dependent, and Delinquent Classes
- 1890 Schedule of Union Veterans and Widows

Have you found your ancestor on one of these schedules? What did you find?

I've found quite a lot of information in the non-population schedules. Here are a few of my previous posts about them:

Timothy Creeden - Down on the Farm - The 1880 Agricultural schedule was one of my favorite finds since it gave me so much insight into the farming life of my 2x great-grandparents Timothy and Mary Creeden in Clinton County, Ohio. I'd pictured fields of single crops like corn or wheat, but they had so much more going on!

Hannah Hoover Creedan - 1880 Mortality Schedule - This schedule lists information about people that died in the year before the 1880 census was taken. It links the deceased to their family in the 1880 census and gives some additional information such as cause of death and length of residence in the county. Hannah lived in Clinton County, Ohio and was the second wife of my 3x great-grandfather Patrick Creedan.

John Matson in 1890 Schedule of Union Veterans and Widows - This schedule provided more insight into John Matson's service and included the reason for his disability which was "wounded hand".

This last one is a bit of a mystery. I was surprised to find a Mary A. Matson in the 1880 Agricultural schedule for the Hopewell township of Mercer County, Ohio. According to the schedule, she was renting the farm land for a fixed amount of money. The rest of the information on the schedule is blank for Mary, so maybe she wasn't actively farming the land.

I would guess this was the same Mary Matson listed in the 1870 census for Mercer County. If so, she was born in Virginia in 1833. This is intriguing since my Matson family came from Virginia to Clinton County, Ohio. It appears that some of the Matsons went to Mercer County instead, so I'll have to see if I can figure out her relationship to my Matsons.

#52Ancestors is a series of weekly family history prompts developed by Amy Johnson Crow.
All articles on this blog are © Copyright 2018 by Kathryn - Posted at 2:36 PM 0 comments

The 52 Ancestors prompt for this week is "Family Legend". It isn't unusual for a family to have some sort of legend. Maybe it's a legend surrounding the family's arrival in a country or that there's an ancestral castle waiting to be claimed. Maybe it's a story about how you're supposedly related to someone famous. You could explore how you proved or disproved the story. Then there are the "tall tales" that seem to get taller at every telling!

My father told me quite a few stories about his grandfather's adventures as county sheriff during the 1920s. Charles Creeden was the County Sheriff of Mercer County, OH from 1923-1927. One legend I've been able to prove during Charles' time as sheriff involved a skirmish at the opening of the Mercer County courthouse where Charles turned the fire hoses on an unruly mob. I was also able to find an article about the arrests of farmers for having stills (or hootch!) on their farms during prohibition.

Another of my father's stories involved a gunfight that broke out when Charles and his deputies tried to serve papers on a local pastor. They approached the person in question on his way to church and he pulled a gun out from under his bible and shot at them! A bullet grazed Charles in the head and left a scar. The sheriffs shot back and the shooter was arrested.

I've searched for a newspaper article on this story before with no luck, but this time I had some success. 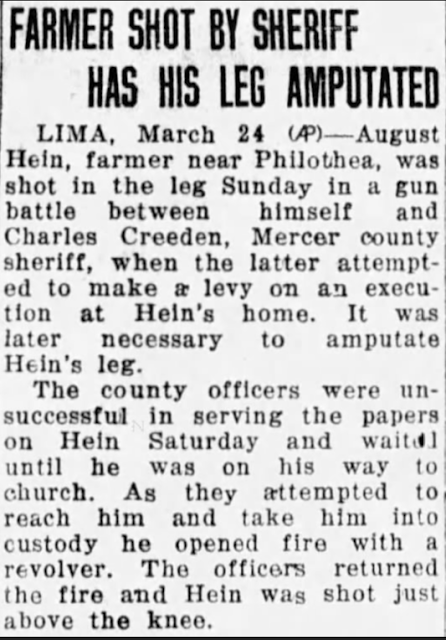 The above article was published in the News-Journal in Mansfield, OH on March 24, 1925 and is available on Newspapers.com. It seems to confirm most of the story. It's interesting that it doesn't mention Charles being shot, but I'm guessing the injury was fairly minor. It also doesn't mention the details about a pastor or pulling the gun out from under a bible, so hard to say if that is true or if my great-grandfather was just adding a bit of color to the story! Given that Hein was on his way to church, it certainly seems possible.

One final thing I wondered about was the levy of execution mentioned in the article. According to Nolo.com, this is a court order authorizing a levy on (or seizure) of property or other asset to satisfy a creditor. No wonder Mr. Hein didn't want to answer the door when the sheriffs came to his house!

#52Ancestors is a series of weekly family history prompts developed by Amy Johnson Crow.
All articles on this blog are © Copyright 2018 by Kathryn - Posted at 1:00 PM 0 comments

The 52 Ancestors prompt for this week is "Oldest". How are you going to interpret "oldest"? The oldest child in one of your ancestral families? The oldest photo you have? The oldest document you've ever found? The oldest ancestor you ever met?

This prompt reminded me that I have a mystery photo that I'm still curious about. I first posted about this in 2012, but wanted to see if I could find some new information.

My grandmother gave this photograph to my mother, but the identity of the woman in the portrait is a mystery. My mother's family was from Queen Anne's County, Maryland and the surrounding areas. Some of the surnames in my grandmother's family are Willis, Chilcutt, Adams, and Covey, so it's possible that the woman is from one of these families. 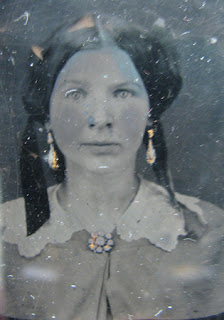 The photograph is in a hinged case which opens up and has a plush velvet-like material on the left side. From everything I could find online, the style of dress looks like it could be from the 1860s. Her jewelry looks like it might have been enhanced in the photograph. The photograph is behind a glass plate which is very reflective and a bit tricky to capture with my camera. I think the photo is most likely an ambrotype. 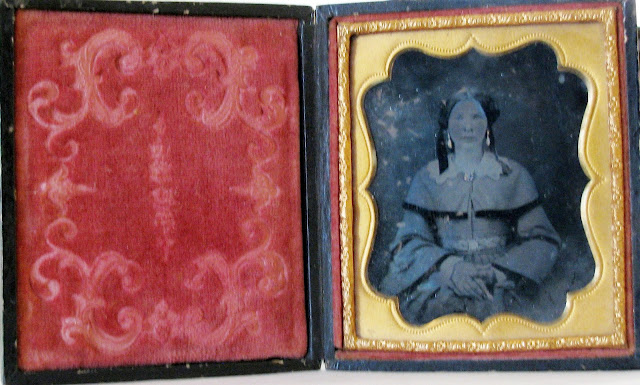 The Daguerreian Society has some good information on the history of daguerreotype and ambrotype photographs and their cases. The outer case for this photograph looks like a Union Case which dates it to sometime from 1855-1865. A Union Case was a mixture (or union) of shellac and wood fibers that were pressed into a steel mold. Phototree.com has some examples of women's clothing that also leads me to believe the photo is from this time period. 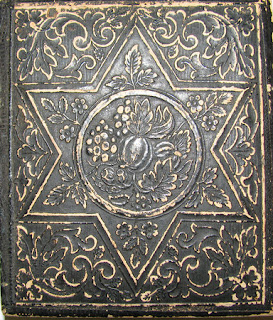 I wondered if the design on the case could shed any light as to its origins or time period. I found a match for the case on CivilWarTalk.com's forum where they were discussing the meaning of the six-sided star. It was mentioned there that the US Army Eighth Corps adopted the six-sided star as their insignia in the summer of 1864.

From Wikipedia, the Union Army VIII Corps badge looked like this: 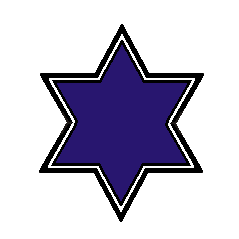 A short history of the VIII Corps states that they were based in Maryland, so that at least matches the location of my mother's family. Of course, I don't even know for sure that the picture is of one of her ancestors! I can't really draw any conclusions from any of this, but it was interesting to find a match for the case. I don't know of anyone from her mother's family that served in the Civil War, but I don't have a lot of details on some of them. If anyone has suggestions on finding more out about this photograph, I'd love to hear from you!

#52Ancestors is a series of weekly family history prompts developed by Amy Johnson Crow.
All articles on this blog are © Copyright 2018 by Kathryn - Posted at 6:21 PM 2 comments