The Immaculate Conception Class of 1952 received their First Communion on May 10, 1942 in Celina, Ohio. My father is the 3rd from the right in the 3rd row in the photo above.

According to a history of the class printed for a reunion in 1972, Father George Hindelang was the pastor and the class was confirmed on December 6, 1942 by Bishop George Rehring. The class had 43 students when they started as First Graders in 1940 and had a graduating class of 26 students in 1952. Interesting that they received First Communion at the end of second grade and Confirmation in the next school year. When I was attending school, it was more common to receive Confirmation several years later, usually in the eighth or ninth grade.

My father kept the holy cards he received for his First Communion and Confirmation.

The First Communion card was signed, To dear little Timothy from Sister Mary Protas May 10, 1942.

My Dad was in the Class of 1952 at Immaculate Conception High School in Celina, Ohio. One of the mementos he kept from his high school days was the program for the Junior-Senior Reception in 1951. I'm guessing from the cover of the program that this was similar to the Junior-Senior Proms we have today. 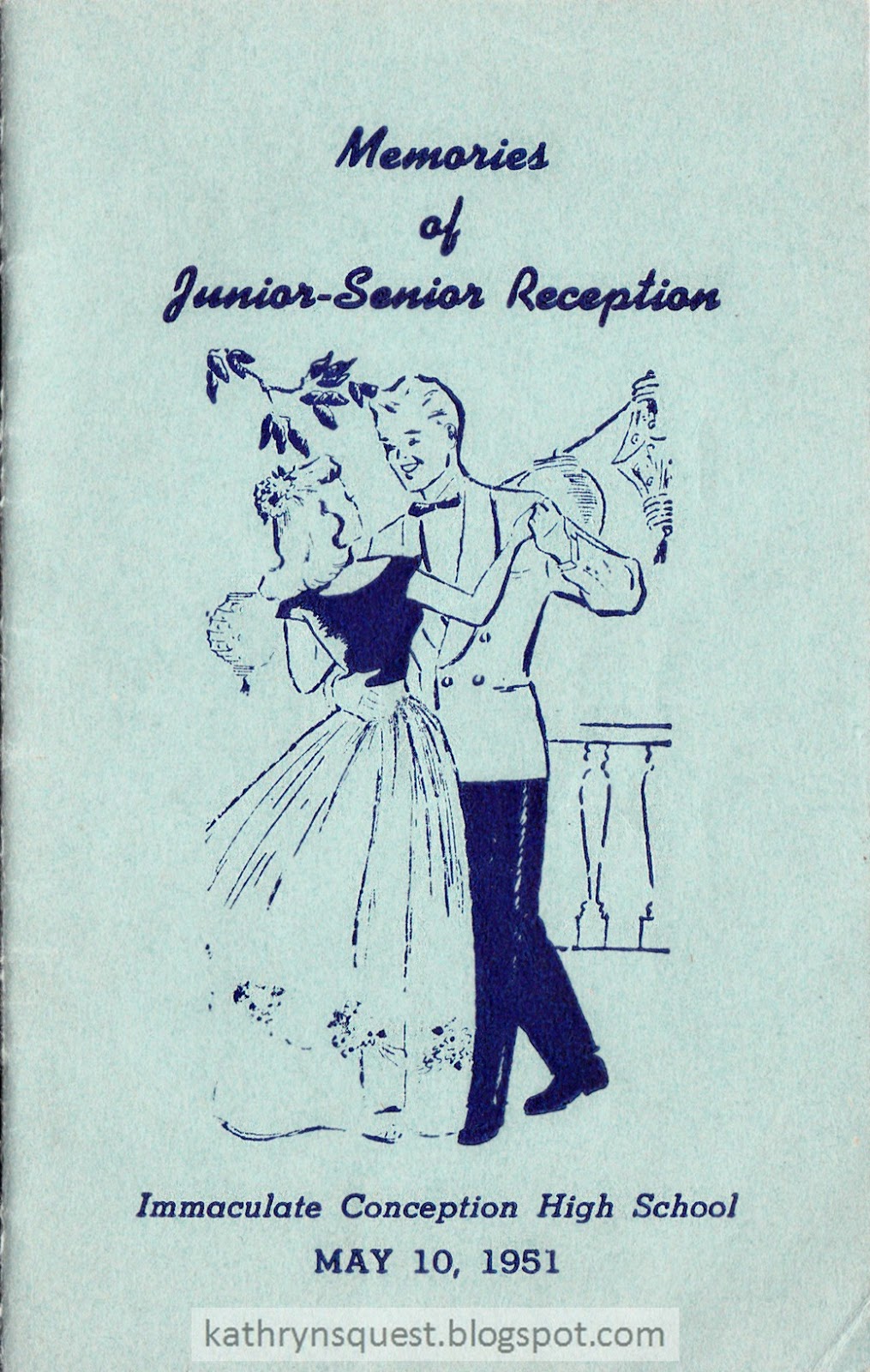 The inside of the program listed the events for the evening, the menu, and names of the faculty and students. I was surprised to find that my Dad was Toastmaster and that he'd kept a type-written paper with the toast tucked away inside the program. 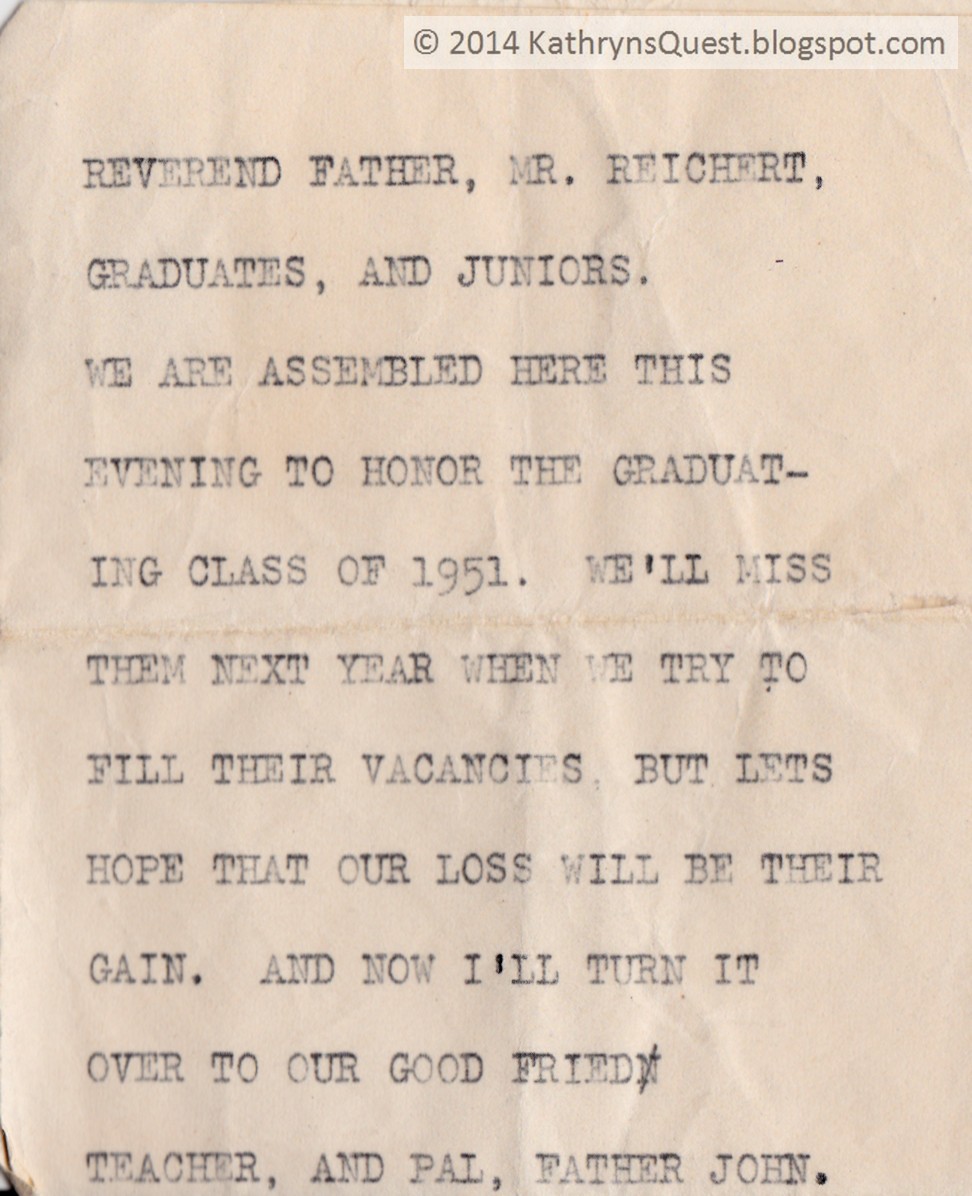 The toast reads as follows: Reverend Father, Mr. Reichert, Graduates, and Juniors. We are assembled here this evening to honor the graduating class of 1951. We'll miss them next year when we try to fill their vacancies, but lets hope that our loss will be their gain. And now I'll turn it over to our good friend, teacher, and pal, Father John. 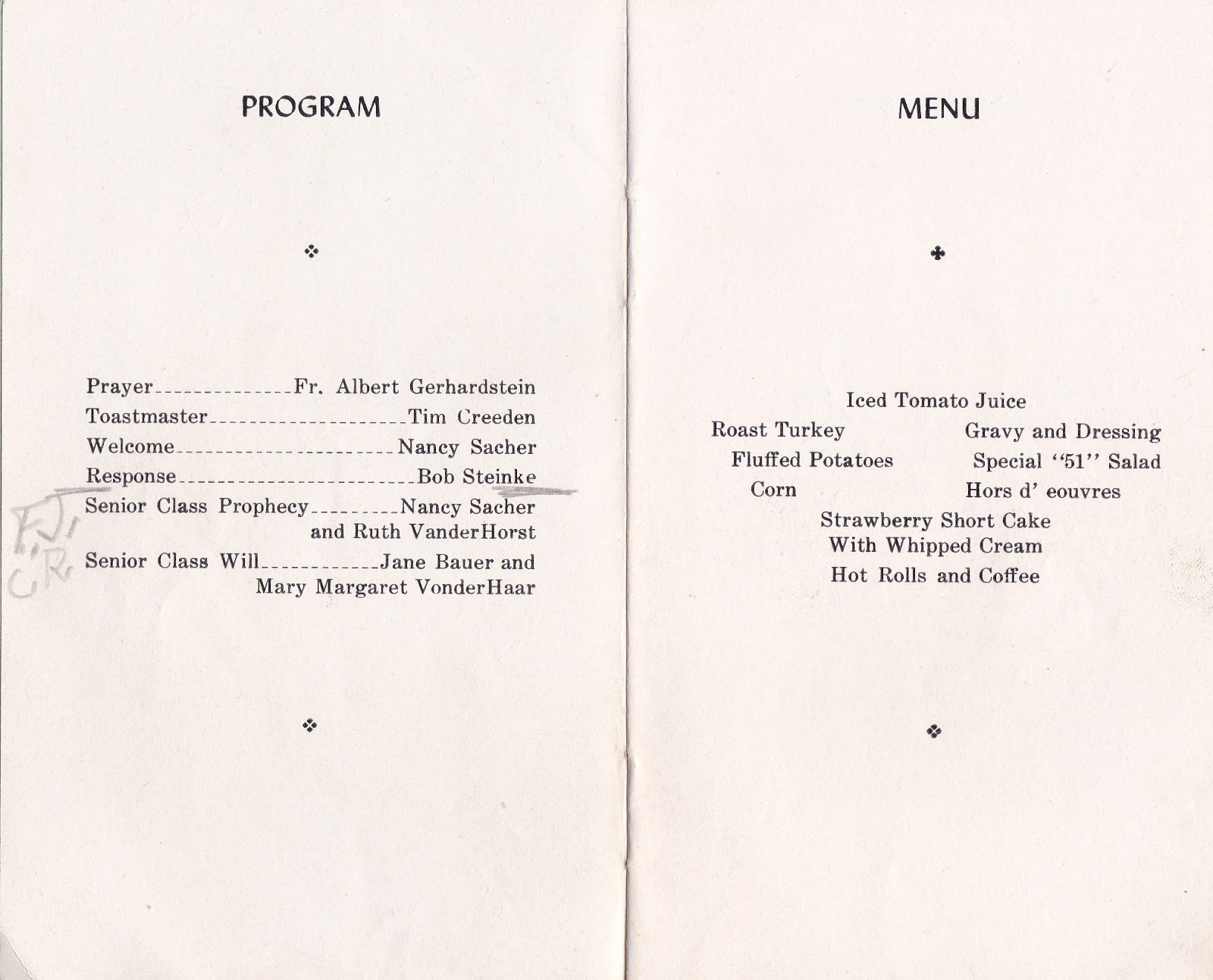 The pages above list the program and menu. I wonder what was in that Special "51" Salad! 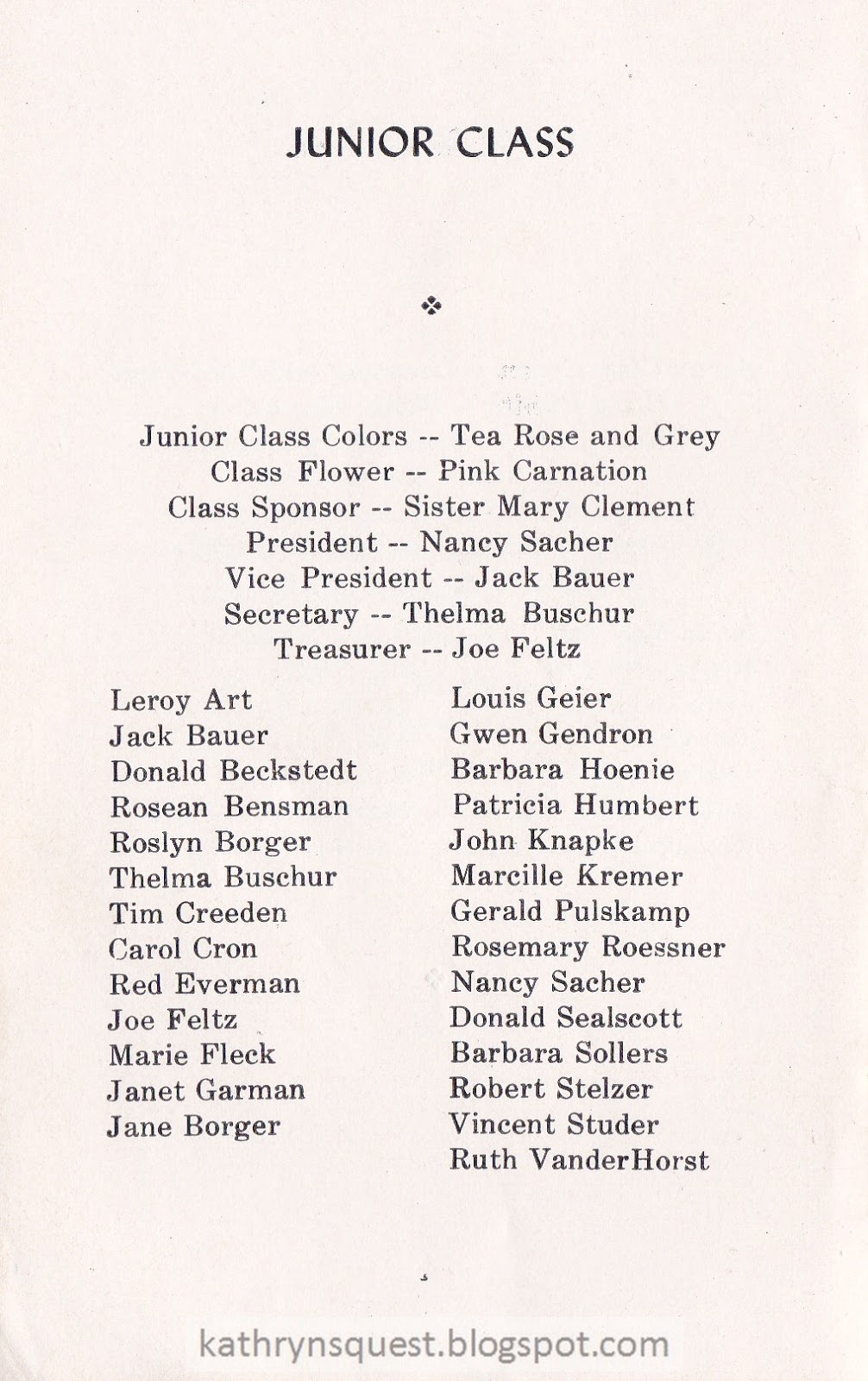 The next pages listed the colors, flowers, officers and students for the Junior and Senior Classes and the faculty members of the school. 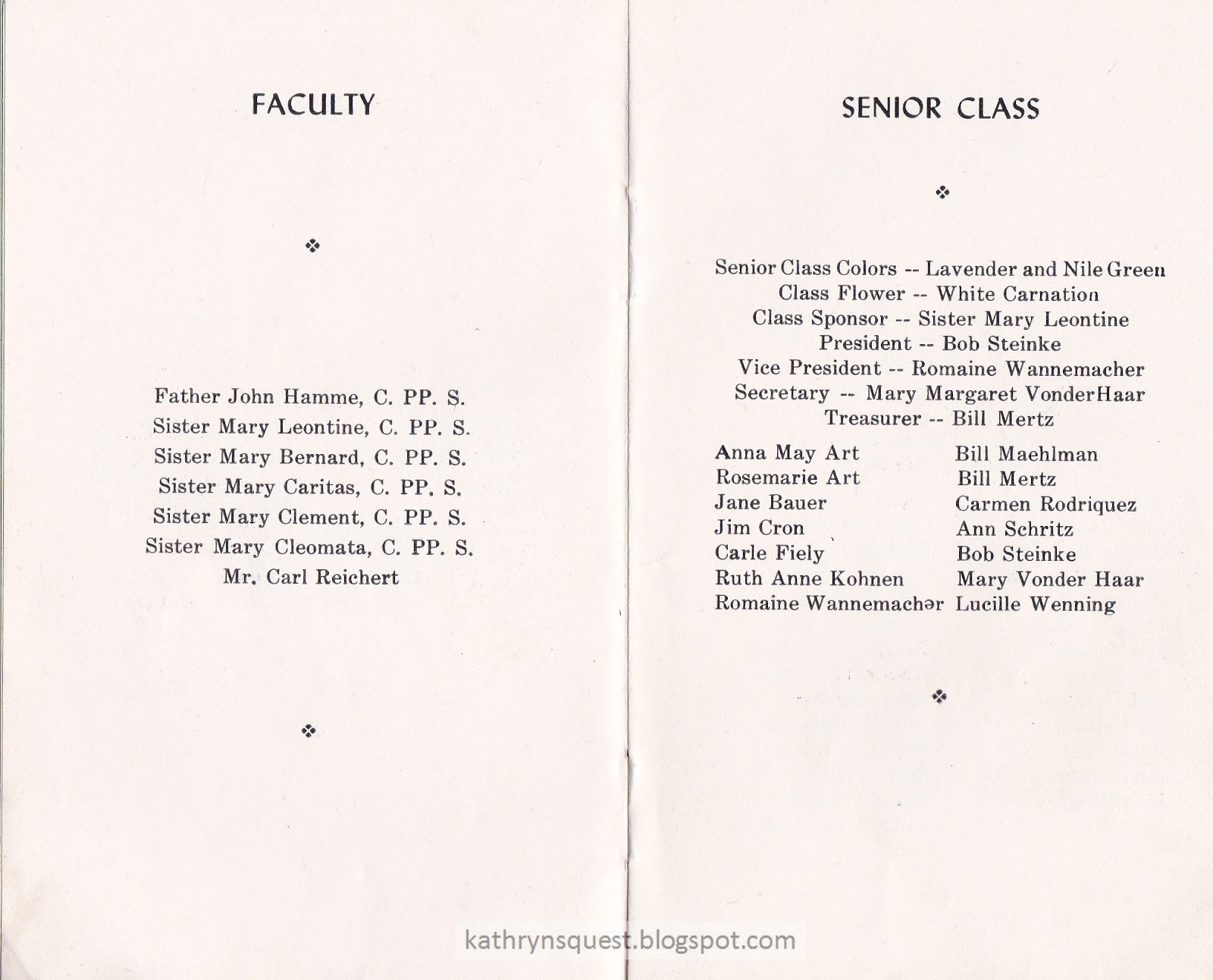 The high school closed in 1972, but the parish continues to operate a preschool and elementary school. The Immaculate Conception Church is celebrating their 150th anniversary this year and has been posting history and photos on their 150th Anniversary Facebook page.
All articles on this blog are © Copyright 2018 by Kathryn - Posted at 12:44 PM 0 comments

Sibling Saturday - Camping in the Keys 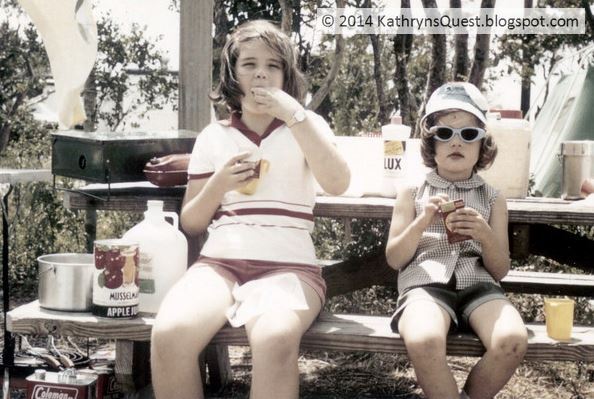 This shot of my sister and I munching on raisins always cracks me up. Check out our skinned up knees, not to mention my sister's hat and sunglasses! My Dad used to call her Miss Hollywood in that outfit. My Mom was always big on using napkins even when we were camping and I see I have one on my lap. Too funny! 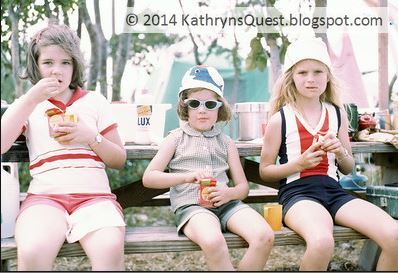 We used to go to the Keys during Spring Break and in the summers. These photos were probably taken at one of the campgrounds in Marathon sometime in the '70s. Our tent is in the background and I can still remember the musty smell of a hot tent in Florida. A few other things I see in the background are a Coleman grill and propane, Lux liquid soap, Musselman's Apple Juice, and laundry hanging on a line. This was one of the trips where my best friend and her family joined us at the campground. She's on the right in the second picture, also enjoying some raisins. We had a lot of fun and adventures on those trips!

Sibling Saturday, a daily blogging prompt suggested by Susan Mosey of Ancestry Binders.
All articles on this blog are © Copyright 2018 by Kathryn - Posted at 12:18 PM 0 comments

The Maryland State Archives has digitized copies of many pages of old Maryland newspapers available on its site. The dates are hit and miss since many pages no longer exist, but it's a great resource if you have Maryland ancestors.

The page shown below was published in The Centreville Observer on October 5, 1918. Centreville is in Queen Anne's County, Maryland and was the home to many of my ancestors. 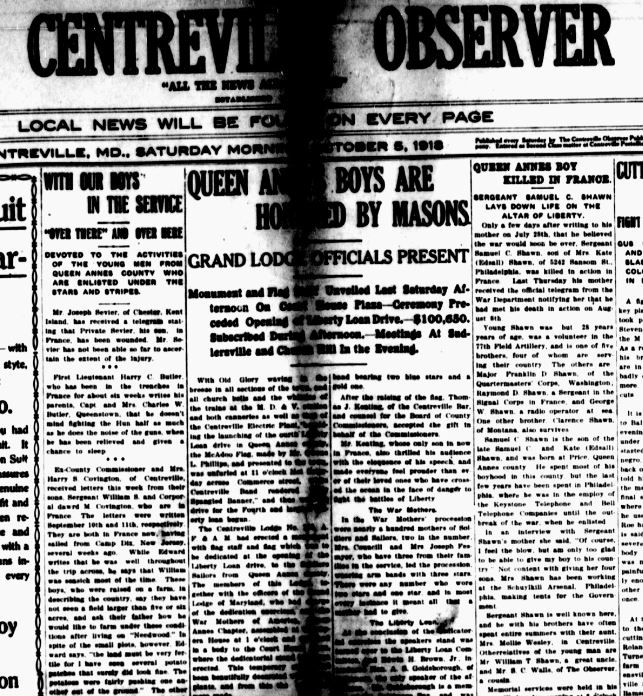 The newspaper must have been in pretty bad shape as the scan isn't too good, but I was able to make out some references to my Councill family. Most of the articles on the front page were about World War One.

One article detailed a dedication ceremony for a monument and flag honoring the soldiers of Queen Anne's County. The ceremony included an address by Senator Harper of Centreville where he mentioned the soldiers that had lost their lives during the war, including my great-uncle Julius Councill.

He very feelingly spoke of the three boys who had already made the supreme sacrifice-- Jeff Davis, Jr. of Centreville, and J. Edgar Potts and Julius K. Council, of Baltimore, but natives of Queen Anne's county.

Another section of the articled talked about a procession of War Mothers where they wore arm bands with a star representing each of their children that were serving in the war. This must have been a very moving part of the ceremony. My great-grandmother Ariana Councill was one of two mothers that had three children in the military and had only learned of the loss of her son Julius a few weeks before the ceremony. 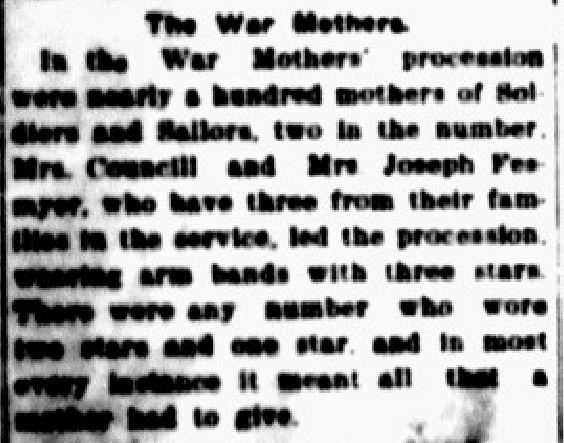 In the War Mothers' procession were nearly a hundred mothers of Soldiers and Sailors, two in the number, Mrs. Councill and Mrs. Joseph Fesnaper?, who have three from their families in the service, led the procession, wearing arm bands with three stars. There were any number who wore two stars and one star, and in most every instance it meant all that a mother had to give.

The ceremony concluded with a mention of the upcoming Liberty Loan event intended to raise more money for the war efforts. According to the article, $100,650 was already subscribed during the afternoon of the dedication ceremony. Only a few pages were available in the digital collection for The Centreville Observer for October 1918, so I was fortunate that they included the information on the dedication ceremony and the connections to my Councill family.
All articles on this blog are © Copyright 2018 by Kathryn - Posted at 12:30 AM 0 comments

Walnut Street in Celina, Ohio was home to much of my father's family. He grew up on 670 N. Walnut Street in the house that his Creeden grandparents owned for over 40 years.

His Pulskamp grandparents lived down the street at 619 N. Walnut St. and his aunt and uncle Clarence and Emma Lee Art lived on 623 N. Walnut St. Emma Lee was George and Mary Pulskamp's daughter and the twin sister of my grandmother Anna Lee Pulskamp Creeden.

Both sets of my father's grandparents were in the same houses in the 1930 census with several of their children living with them. Both families owned their homes.The Creeden house was valued at $5500 and the Pulskamp house at $8000.

I was surprised to find that both families were living on Walnut Street in the 1920 census, but in different houses. The families were living very close to each other, with the Creedens at 611 and the Pulskamps at 623 N. Walnut St. Both families owned their homes, although the Creedens had a mortgage. My grandparents Robert Creeden and Anna Lee Pulskamp were 8 and 9 years old, so must have known each other at an early age.

In the 1910 census, the Pulskamps owned the home on 611 N. Walnut Street. The Creeden family may have bought the house from the Pulskamps since they were living in it by 1920. I also noticed that the Art's house at 623 in 1940 was the same house that the Pulskamps owned in 1920. That house was being rented in 1930, so it's possible that George still owned it then. It was interesting to see all the moving around the families did on the same street!

Census images are from Ancestry.com. Census Sunday is a daily blogging prompt suggested by Colleen Pasquale of Leaves and Branches.
All articles on this blog are © Copyright 2018 by Kathryn - Posted at 12:31 PM 0 comments