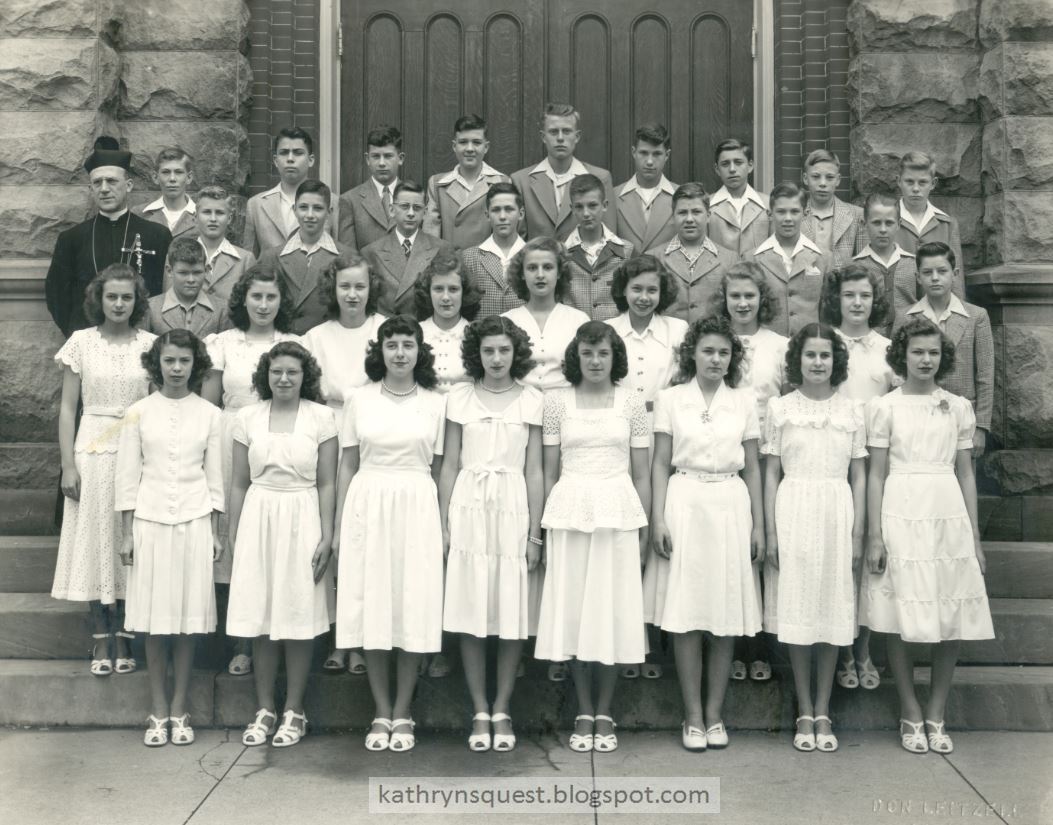 This photo of the Immaculate Conception eighth grade class was taken for the 1947-48 school year in Celina, Ohio. My Dad, Tim Creeden is the fourth kid from the left in the back row. The class graduated from Immaculate Conception High School in 1952.
All articles on this blog are © Copyright 2018 by Kathryn - Posted at 8:56 AM 0 comments 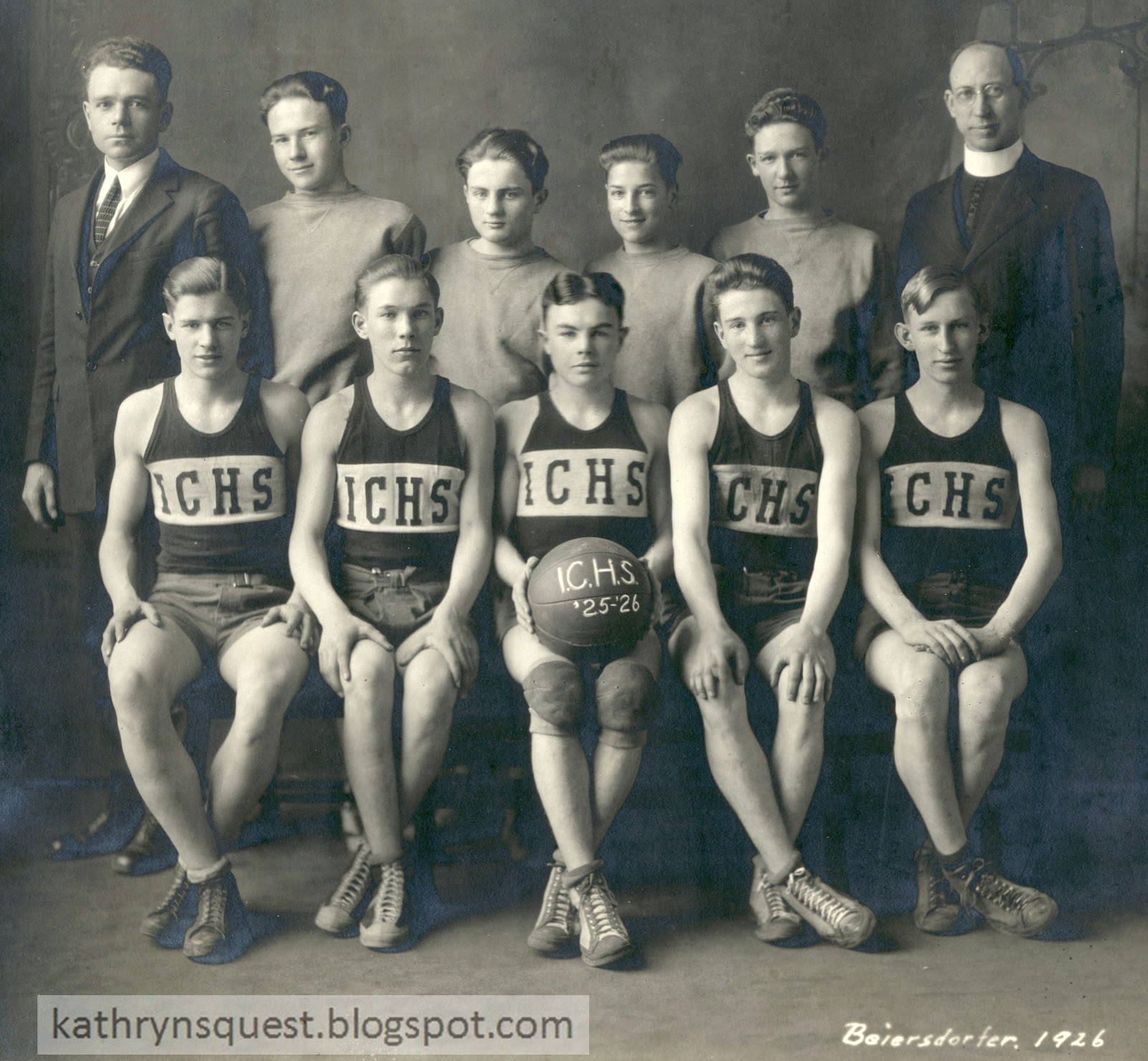 The back of the 25-26 team picture says Father John, Manager and Dutch Schulte, Coach, 1925-26. My grandfather Robert (Bob) Creeden would have been 15 that year and may be the boy on the back right next to the priest. Al Winkeljohn may be the boy on the front right. ICHS was the Immaculate Conception High School in Celina, Ohio. 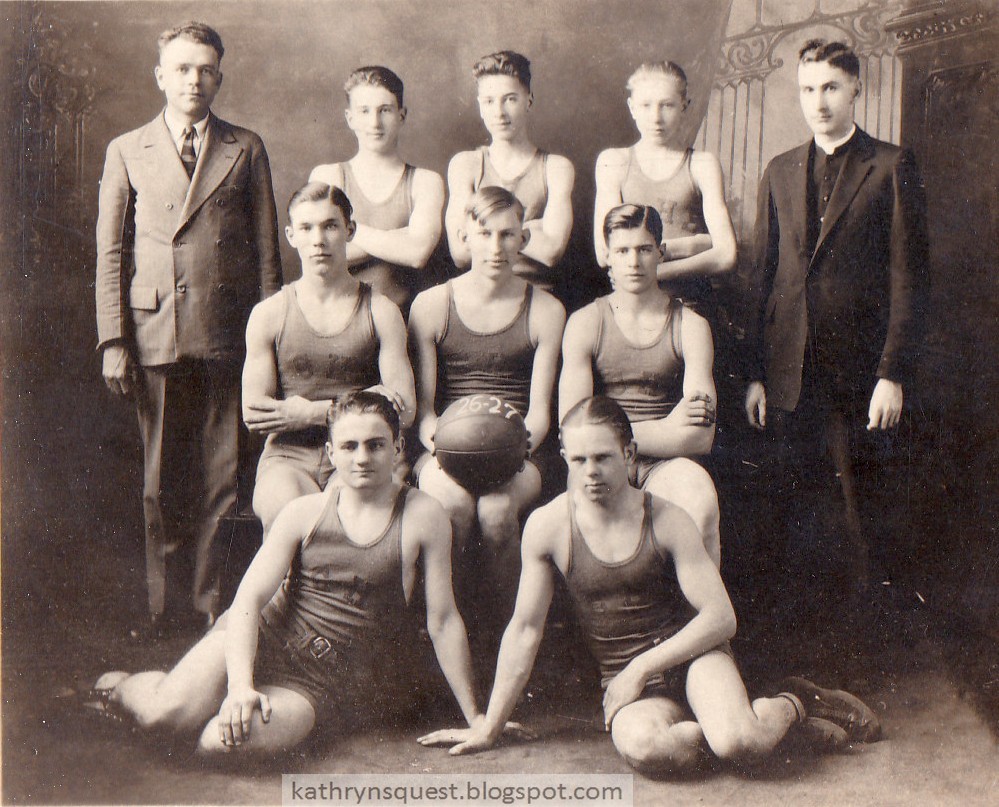 There was no label on this picture, so good thing they had the year on the basketball! It says 26-27.
All articles on this blog are © Copyright 2018 by Kathryn - Posted at 12:56 PM 2 comments

My great-great-grandparents Timothy Creeden and Mary Ann Matson moved from Clinton County, Ohio to Hopewell Township in Mercer County, Ohio sometime in the mid 1880s. I wondered why they made the move and found at least part of the answer in the census records. Several members of Mary's family had already moved to Mercer County by the time the 1880 census was taken.

The earliest Matson records I found in the Mercer County census were for a John Matson in 1830 and a William Matson in 1840. I didn't find any other trace for these Matsons, although there is a William Mattison in the 1850 census. He is only 11 years old and is living with the Issac Coil family.

In 1860, John, Elizabeth, and Enos Matson were living with the David Wright family in Liberty Township. The Matson children were all minors. There was also a Nancy Matson, age 17, working as a servant for the Daniel Garwick family in Center Township.

Mary Matson and several children were in the 1870 census for Hopewell Township. I'm not sure what, if any relationship these early Matsons have to my family.

Mary Matson Creeden's sister Terissa or Theresa was married to John Sholler and they were in Hopewell in the 1880 census. John's entry was at the bottom of a page and Theresa's was on the next page for District 2, Enumeration District 186.

Their brother John Matson was living nearby in the same enumeration district as John and Theresa. He was a boarder at Lavina Bender's house and was a farmer. John and Lavina were married in Mercer County on October 1, 1882.

Other Matsons in the same enumeration district were Elizabeth Matson, listed as an aunt to Lewis Nunery, Sarah L. Matson, a servant at the William H. DeFord household, and Sarah Matson and her son John W. Matson. From John's age of 23 in the census, he would have been born around 1857. An obituary for a John William Matson, born in 1857, says that he was born in Clinton County, Ohio. It's probable that this is the same John W. Matson and shows that he is also linked to the Clinton County Matsons.

John Matson and John Sholler were both in the 1890 Veteran's Census for District 2, Enumeration District 186 for Hopewell Township. John died in 1896 and is buried next to Timothy and Mary's son James E. Creeden in the Old Buck Cemetery in Hopewell Township.

So it appears that Timothy and Mary had a lot of family nearby in Hopewell Township! That helps explain why they made the move to Mercer County.

To Do: Investigate the unknown Matsons to see if they have links to my Mary Matson.
All articles on this blog are © Copyright 2018 by Kathryn - Posted at 1:34 PM 0 comments