I've been amazed at how much family tree information is available in the Maryland land records. Also amazing is that digital images of the records are available on MDLandRec.net. Registration is required, but the site is free and there is no advertising.

The image below is from Book JP 3, page 545, recorded in 1858 in Queen Anne's County, MD. It records the sale of a tract of land owned by my 2x great-grandfather Samuel A. Sparks and his brother Daniel B. Sparks to William F. Parrott.

According to the record, the land was inherited by their father Daniel Sparks from his brother John Sparks and was deeded to John Sparks by William Ringgold on May 5, 1823. The tract of land was called "Heath's Gift" and was located in Spaniard's Neck in Queen Anne's County, MD. It consisted of 7 7/8 acres and bordered the Methodist Meeting House and another tract of land called "Plain Dealing". This record doesn't mention Daniel and Samuel's other siblings, but says that they were tenants in common with their brothers and were each entitled to 1/6 of the property. The deed is signed by Samuel, his wife Susan A. (Godwin) Sparks, Daniel, and his wife Julia A. Sparks.


The next record is from Book JW 7, page 518, recorded in 1878. This record names the siblings of Samuel and involves a tract of land "commonly known as "The Sparks Lot". In this transaction, James H. Sparks and his wife Martha M. Sparks are selling "The Sparks Lot" in Spaniard's Neck to Charles Gilliam for $150. "The Sparks Lot" adjoins the land of Charles Gilliam, Eliphat Higgins and faces the public road leading from the Methodist Episcopal Church through the woods to the land of Col. John R. Emory. The land contains about 8 7/8 acres and is the same land which descended from Daniel Sparks, father, to Robert M. Sparks, Martha Sparks, wife of George W. Meredith, Daniel B. Sparks, Samuel A. Sparks, and James H. Sparks, his children. The named children had earlier conveyed their interest in the land unto James H. Sparks, with the exception of Daniel B. Sparks. In this transaction, James says that he will procure a conveyance from Daniel B. Sparks and his wife.

While the second record says that this is the same land the children inherited from their father Daniel, I'm not sure if this is a different tract of land from the first record. The sizes and names are different, plus the brothers Samuel and Daniel sold land in the first record in 1858. Maybe they were adjoining properties and part of the same inheritance.

I didn't know the names of Samuel's siblings or father before seeing this record. Thanks very much to George Sparks for sending me the information about the records! George also sent me a copy of Samuel's death certificate, but unfortunately, it didn't list his parent's names. We still don't know who his mother was. Was there a sixth sibling? The earlier record mentions that each was entitled to 1/6 of the land, but the later record only names 5 siblings. From the names listed in these two records, I came up with the following tree. 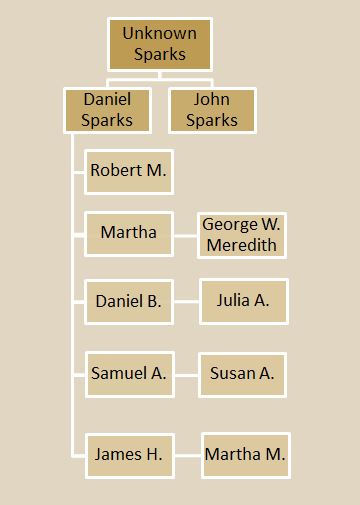 To Do:
Mappy Monday is a GeneaBloggers prompt where you can post map images and how they relate to your research or discuss other aspects of land ownership and your ancestor.
All articles on this blog are © Copyright 2018 by Kathryn - Posted at 12:30 AM 0 comments 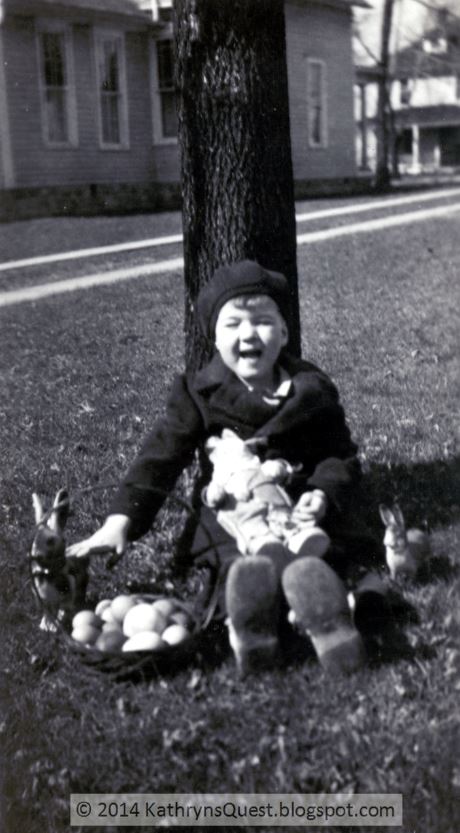 Wishing everyone a joyous Easter! This photo is of my father, Tim Creeden in 1939. Looks like he was having a great time!
All articles on this blog are © Copyright 2018 by Kathryn - Posted at 12:30 AM 0 comments 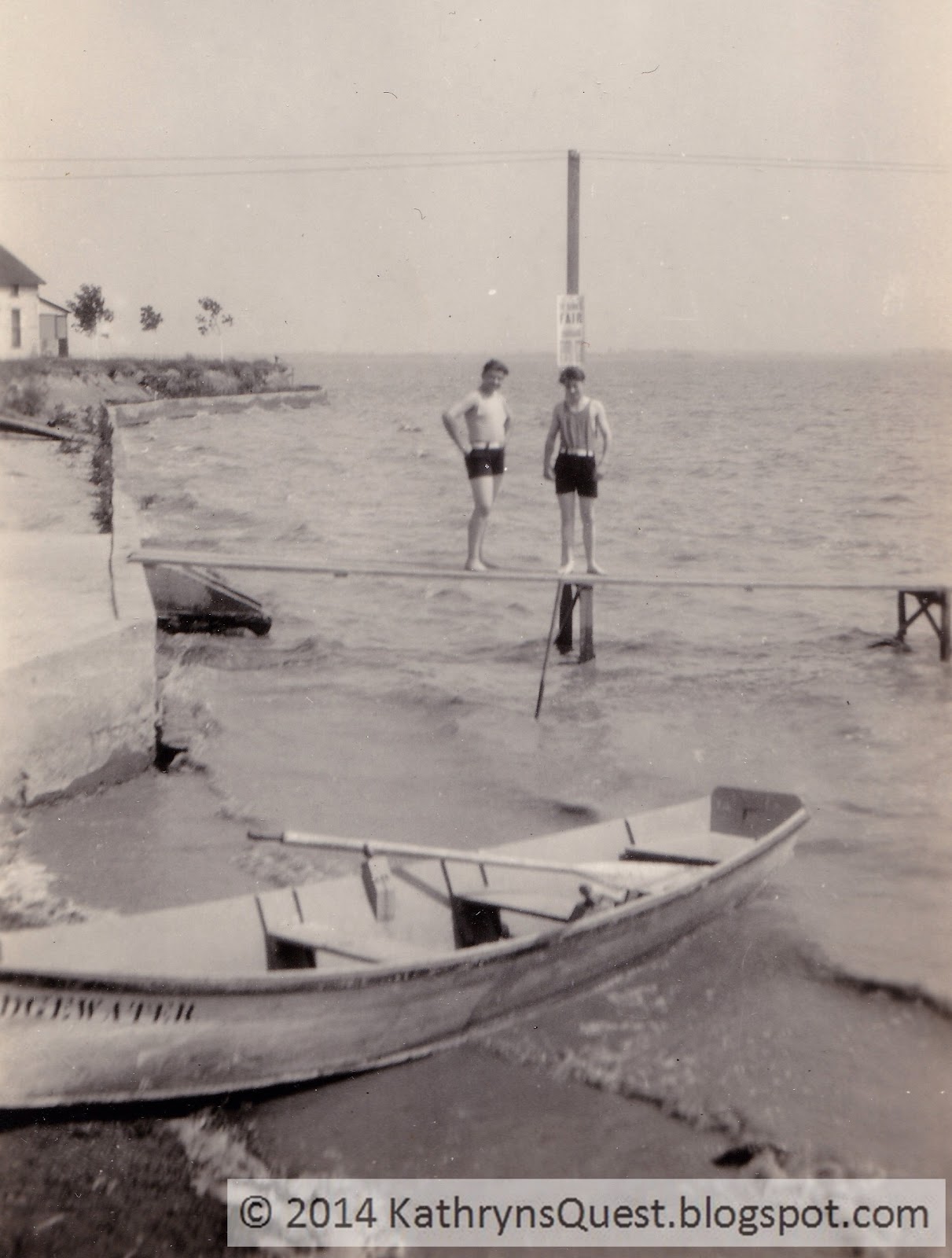 This photo was labeled Geo. P., so I'm guessing one of the men on the dock is my great-grandfather George Pulskamp. They used to stay in Edgewater Park during the summers from around 1915 to 1950. George's wife Mary ran a grocery store there with their kids and the Pulskamps rented out seven cottages. The flyer on the pole behind them is advertising the Mercer County Fair.
All articles on this blog are © Copyright 2018 by Kathryn - Posted at 1:20 PM 0 comments