Week 21: Ancestor Tales of Hardship: In genealogy, there are plenty of clouds in the form of sad stories and hardships faced by our ancestors. These tales should not be forgotten because descendants can learn from them. Share with us a particular ancestor’s hardship story. How did these events impact your life?

One new bit of information in the 1940 census was that my great-grandfather Charles Creeden only finished 8 years of school. His father Timothy Creeden died in 1899 at the age of 53 and Charles was one of six children still living at home. The 1900 census showed that two of the older children were working while the others were in school. That probably was Charles' last year of school.

My great-great-grandmother Mary Ann Matson Creeden mortgaged part of the family farmland and bought a house in town in Celina, OH to run as a boarding house. Renters were provided room and board including meals and laundry. In the picture above, the sign on the house above Mary's head says "Ice, 7c a day", so it looks like she was resourceful on finding ways to make extra money.

Charles worked for the Mersman Furniture Factory for several years, was Mercer County Sheriff in the 1920s, ran a filling station and store and then became the Celina Postmaster for many years. He did quite well despite having to leave school early. My father was raised by his grandparents Charles and Anna and was taught to have a great respect for education. He completed college and encouraged me and my sister to do the same. It couldn't have been easy for Mary and the children, but they made it through.

52 Weeks of Abundant Genealogy by Amy Coffin is a series of weekly blogging prompts (one for each week of 2012) that invite genealogists and others to discuss resources in the genealogy community including websites, applications, libraries, archives, genealogical societies and more.
All articles on this blog are © Copyright 2018 by Kathryn - Posted at 1:03 PM 1 comments 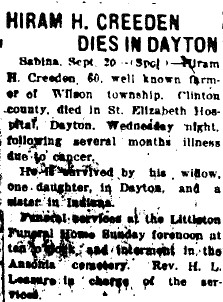 Hiram H. Creeden Dies in Dayton
Sabina Sept. 20 - (Spcl)
Hiram H. Creeden, 60, well known farmer of Wilson township, Clinton county, died in St. Elizabeth Hospital, Dayton, Wednesday night, following several months illness due to cancer.
He is survived by his widow, one daughter, in Dayton, and a sister in Indiana.
Funeral services at the Littleton Funeral Home Sunday forenoon at ten o'clock, and interment in the Ansonia cemetery. Rev. H.L. Leasure in charge of the services.

Hiram Hulbert Creeden was born on March 4, 1875 to John and Minerva Creeden. He married Hallie Purdom and they had a daughter named Northa. They made their home in the Wilson Township of Clinton County, Ohio where Hiram farmed and ran a general store. Hiram was the Treasurer of Wilson Township in 1915.
All articles on this blog are © Copyright 2018 by Kathryn - Posted at 12:49 PM 0 comments 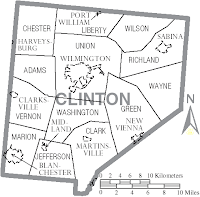 The Creeden (or Creedon) surname isn't that common, but there were quite a few Creedon families in Clinton County, Ohio in the 1800s. I've wondered what the connections were between them and if any of them are related to my Timothy Creeden.

The first record I found for Timothy was the 1870 census where he is with his wife Mary Ann Matson and their newborn son Patrick in the Richland Township of Clinton County. They don't own land and are living with or next to John Matson and his family. The box for US Citizen is checked for Timothy which indicates he may have been in the US for a few years. The earliest record I have for him is his marriage to Mary in 1868. My great-grandfather said that Timothy served in the Civil War and was from County Cork, Ireland, but I haven't been able to find any records to prove that.

A Patrick Creedan, wife Hannah Hoover and family lived in neighboring Wayne Township. This family has intrigued me since some of the same names run through the families and some of Timothy's children were born in Wayne Township. Also, Patrick's son John last lived in Mercer County, Ohio where my Timothy moved around 1884. Patrick's daughter Rosanne may have also lived in Mercer County.

The following Creedon families lived in Wilmington, Clinton County. These are from the 1870 census unless otherwise noted:

There are several Creedon mentions in some of the histories of Clinton County:
Macroom, Ballyvourney, and Millstreet in County Cork, Ireland are the places mentioned for possible origins of these families.These are are all within a few miles of each other, so it seems likely that at least some of these families are related.
Note: Clinton County Township map is from wikipedia.
All articles on this blog are © Copyright 2018 by Kathryn - Posted at 4:47 PM 2 comments 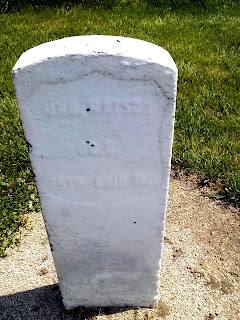 John Matson was born around 1841 in Clinton County, Ohio and died on March 5, 1896 in Mercer County, Ohio. I posted earlier on his Civil War service and how the gravestone was provided by the US government. John was the brother of my great-great-grandmother Mary Ann Matson Creeden and is buried in the Old Buck cemetery in Hopewell Township, Mercer County, Ohio. He is buried next to Mary's son James Creeden. The photo was posted on FindAGrave and is reposted here with permission.
All articles on this blog are © Copyright 2018 by Kathryn - Posted at 9:09 AM 0 comments 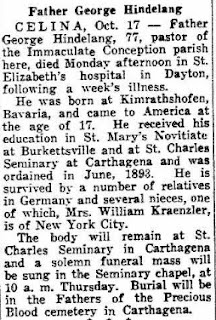 Father George Hindelang
CELINA, Oct. 17 -- Father George Hindelang, 77 pastor of the Immaculate Conception parish here, died Monday afternoon in St. Elizabeth's hospital in Dayton, following a week's illness.
He was born at Kimrathshofen, Bavaria, and came to America at the age of 17. He received his education in St. Mary's Novitiate at Burkettsville and at St. Charles Seminary at Carthagena and was ordained in June, 1893. He is survived by a number of relatives in Germany and several nieces, one of which, Mrs. William Kraenzler, is of New York City.
The body will remain at St. Charles Seminary in Carthagena and a solemn funeral mass will be sung in the Seminary chapel, at 10 a.m. Thursday. Burial will be in the Fathers of the Precious Blood cemetery in Carthagena. 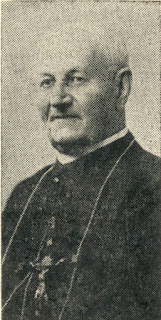 Father Hindelang was pastor of the Immaculate Conception Church in Celina, Ohio for many years. He celebrated his Sacerdotal Golden Jubilee there on June 21, 1943 and shows up in many of my family's church records as the officiating pastor.

Sunday’s Obituary is an ongoing series developed by Leslie Ann at Ancestors Live Here.
All articles on this blog are © Copyright 2018 by Kathryn - Posted at 2:20 PM 0 comments

James Creeden was the son of my great-great-grandparents, Timothy and Mary Ann Matson Creeden. He died on Oct. 3, 1889 at the age of 17 in Hopewell Township, Mercer County, Ohio. He was their oldest living child and died of typhoid fever. James was listed as a farmer in an index for Mercer County, so he probably worked on the family's farm in Hopewell.

The gravestone shows that James' middle initial is "E" and Timothy's is "C". I hadn't seen a middle initial for Timothy anywhere, so this is a little bit of new information. These photos were posted on FindAGrave and are reposted here with permission. 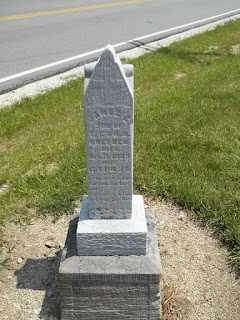 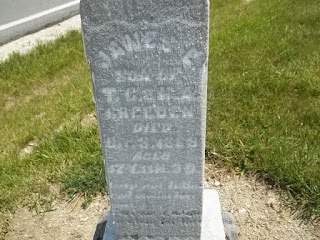 There is more writing under the age, but it is difficult to make out. The first part is possibly "Weep not father and mother for me..."

Wednesday's Child is an ongoing series by Amy at Gravestoned.
All articles on this blog are © Copyright 2018 by Kathryn - Posted at 9:44 AM 0 comments

My great-great-grandparents Mary Ann Matson and Timothy Creeden were married in December 1868 in Clinton County, Ohio. 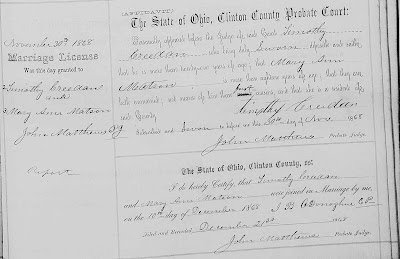 On the marriage license, part of it states "not nearer in kin than second cousins". The second is crossed out and first is written above it.

I am puzzling over how Timothy and Mary could be first cousins. Timothy was born in Ireland in 1846 according to all of the records I have on him and statements from my great-grandfather about Timothy's origins. If they are first cousins in the strictest sense, they must share at least one grandparent.

In order for Timothy and Mary to be first cousins, either a sibling of either Asa or Dolly would have to be one of Timothy's parents or perhaps one of Timothy's grandmothers married into the families after Timothy's parents were born. There are several mysteries here:
Obviously, more proof of all these relationships is needed. Creeden is not that common, but there seem to be a lot of them in Clinton County, Ohio during that time period. I have yet to be able to relate any of them to my Timothy, so I would love to hear from anyone researching these families!

Week 18: Historical Books: This week we're going to shine the spotlight on other historical books that benefit the genealogy field. Do you have a favorite book that falls into this category? What makes this book special to you? How can other genealogists benefit from its content?

One of my favorite historical books is the Mercer County, Ohio History 1978, edited by Joyce Alig. Joyce was the Directory of the Mercer County Historical Museum and currently writes a history column called Our Old Bookcase for the local newspapers there. The book is close to 1000 pages long and contains histories of the county, details on each township and many biographies and pictures. There are quite a few mentions of my ancestors and I refer to it whenever I'm looking into a new name or subject. I always seem to discover something new.

The book is available in several Ohio libraries and sometimes comes up for sale on eBay or Amazon. Abebooks and other used book stores would also be a good place to check. The earlier Mercer County histories for 1882 and 1907 are available online through Heritage Pursuit. This is a subscription site, but is available for free to members of the Ohio Genealogy Society.

52 Weeks of Abundant Genealogy by Amy Coffin is a series of weekly blogging prompts (one for each week of 2012) that invite genealogists and others to discuss resources in the genealogy community including websites, applications, libraries, archives, genealogical societies and more.
All articles on this blog are © Copyright 2018 by Kathryn - Posted at 4:39 PM 2 comments