Last week I posted about land records in Queen Anne's County, Maryland that named Samuel Godwin, Eliza Vincent, and Catherine Casey as grantors of a deed to "Partnership Addition"  to Samuel Meredith. Samuel Godwin was my 3x great-grandfather, but I'm still trying to figure out if this is my Samuel.

The following account  is from the Maryland, Register of Wills books for Queen Anne's county available on FamilySearch.org. The Accounts book for 1832 - 1842 details Samuel Godwin's final account of the estate of George Hackett Godwin in 1837 on image 488. Distributions were paid to ten cousins of George, including Samuel.

Queen Anns County. Samuel Godwin Administrator of all singular Goods, Chattels and funeral Estate of Geo. H. Godwin late of Q. A. County, decd. To balance due as of 2nd final account this day settled... 115.49  Deduct the costs of this distribution... 1.50
The amount is totaled at 113.99. 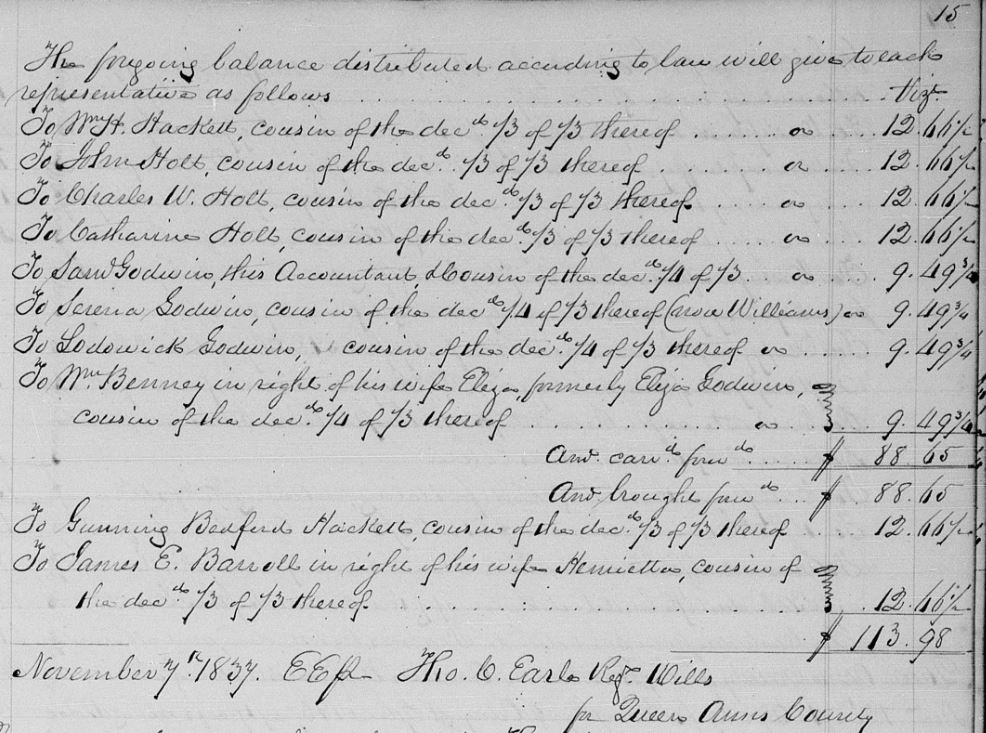 The distributions are totaled to $113.98. The money was divided into a third each between the Holt, Hackett, and Godwin cousins. Then each group of cousins divided their share up between them.

Ann Godwin's will of 1829 named George as her only son, so my guess is that George didn't have any siblings that survived him. A few more guesses... I think it's probable that Ann's maiden name was Hackett since that was her son's middle name. Ann may have had a sister or sister-in-law that married a Holt and a brother-in-law was probably the father of Samuel, Lodowick, Eliza, and Serena Godwin. Ann's brother was probably the father of William, Gunning, and Henrietta Hackett. Keep in mind that these are just guesses at this point.

I still don't know if this is my Samuel, but at least I have quite a few new names to work with!

Amanuensis Monday is a daily blogging theme which encourages the family historian to transcribe family letters, journals, audiotapes, and other historical artifacts.
All articles on this blog are © Copyright 2018 by Kathryn - Posted at 1:11 PM 0 comments

I've been going through the index records on the Maryland Land Records site looking for any signs of my 3x great-grandparents, Samuel and Ann Davis Godwin. Other than the information in the 1850 census, I don't know much about them. They lived in Queen Anne's County, MD in that census and were property owners. Samuel's occupation is given as sailor. Their daughter Susan married Samuel Sparks and in later census records, her parents' place of birth is given as Maryland.

I've found a couple of land records for a Samuel Godwin that are from the right time period. In Book TM 6, pages 552-555, Samuel Godwin, Emmil & Eliza Vincent, and William & Catherine Casey grant a deed to Samuel B. Meredith in 1833. One of the parcels of land mentioned is called "Partnership Addition" and was surveyed by Joseph B. Sparks for Susan Godwin. It includes "Ellen's Enlargement", formerly called "Chance" and "Elliot's Addition". "Elliott's Branch" and "Godwin's Square are also mentioned. The land is 111 3/4 acres and borders "Mary Ann's Lot" and "Exchange". The said Samuel Godwin, Eliza Vincent, and Catherine Casey inherited the land from their relative Susan Godwin.


My first guess is that Samuel Godwin, Eliza Vincent, and Catherine Casey might be siblings. The record names Susan Godwin as their deceased relative, but doesn't say what the relationship is.

The will of Thomas Godwin written in 1822 also mentions Samuel Meredith and says he is living on land called Sowes Arcadia and White Marsh Addition. There is no mention of Samuel Godwin in the will though. Thomas mentions his son Edward, daughters Aquila Cooper Godwin, and Anna Findley Godwin. The will also mentions his brother John and sister Catharine Newman. Thomas' will is available in the FamilySearch.org probate records for Queen Anne's County, MD in Wills 1815-1852, Images 112-113.

The second land record for Samuel Godwin is from Book JT 1, pages 288-290.  In this record from 1834, Samuel Godwin, Eliza Vincent, William Biscoe and his wife Mary, and Mary Skinner of Queen Anne's County are selling a tract of land called Pleasant Spring to John H. Covington for $458 and 33 cents. The land came to the sellers by way of inheritance from Susan Cadd, formerly Susan Biscoe and contained 122 1/2 acres.


So, this Samuel Godwin inherited land from Susan Godwin and Susan Cadd, formerly Susan Biscoe. I took a closer look at the names on page 289 just to make sure "Cadd" wasn't really "Godwin", but it doesn't appear to be.

I've found a few other records for Samuel Godwin, but they don't have any family information that would help pinpoint which Samuel they're for. I've seen middle initials "A" and "K" used, but most of the records have no middle initial. Probate records showed that Samuel K. Godwin died in 1834, so he can be ruled out.

Mappy Monday is a GeneaBloggers prompt where you can post map images and how they relate to your research or discuss other aspects of land ownership and your ancestor. 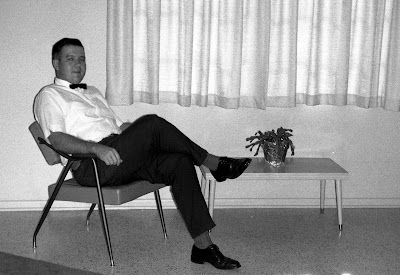 My Dad is showing off his snazzy 1960's bow tie in this photo.  This must have been shortly after we moved into the house as there is no carpet and not much furniture!
All articles on this blog are © Copyright 2018 by Kathryn - Posted at 1:20 PM 0 comments

I posted a few weeks ago about following my Councill family through transactions in the Maryland land records. Here is another entry that helps to solidify the relationships between the Councills. The tricky thing was sorting out all of the John Councills. This entry is from the Queen Anne's County Court Book STW 9, page 414 from the Maryland Land Records site. 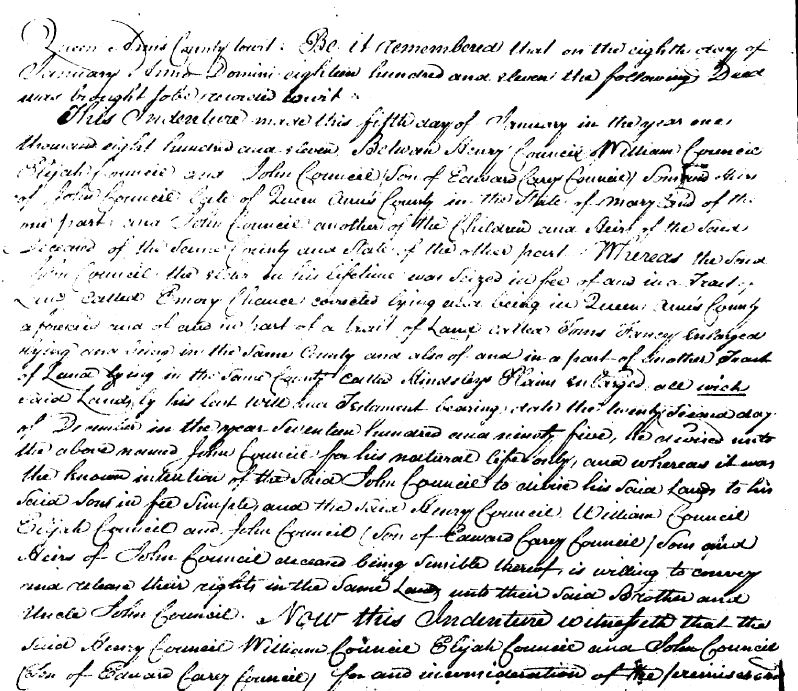 This indenture made this fifth day of January in the year 1811 between Henry Council, William Council, Elijah Council and John Council/Son of Edward Carey Council/ son and heir of John Council late of Queen Anne's County in the state of Maryland of the one part and John Council another of the children and heir of the said deceased of the same county and state of the other part. Whereas the land John Council the elder in his lifetime was seized in fee of and in a tract of land called Emory's Chance Corrected lying and being in Queen Anne's County and... Tom's Fancy Enlarged lying in the same county... and Hindsley's Plain Enlarged all which said lands by his last will and testament bearing date the 22nd day of December in the year 1795, he devised unto the above named John Council for his natural life only, and whereas it was the known instruction of the said John Council to ? his said lands to his said son in fee simple?, and the said Henry Council, William Council, Elijah Council and John Council (son of Edward Carey Council/Son and heir of John Council deceased) being sensible thereof, is willing to convey and release their rights in the same land unto their said brother and Uncle John Council. 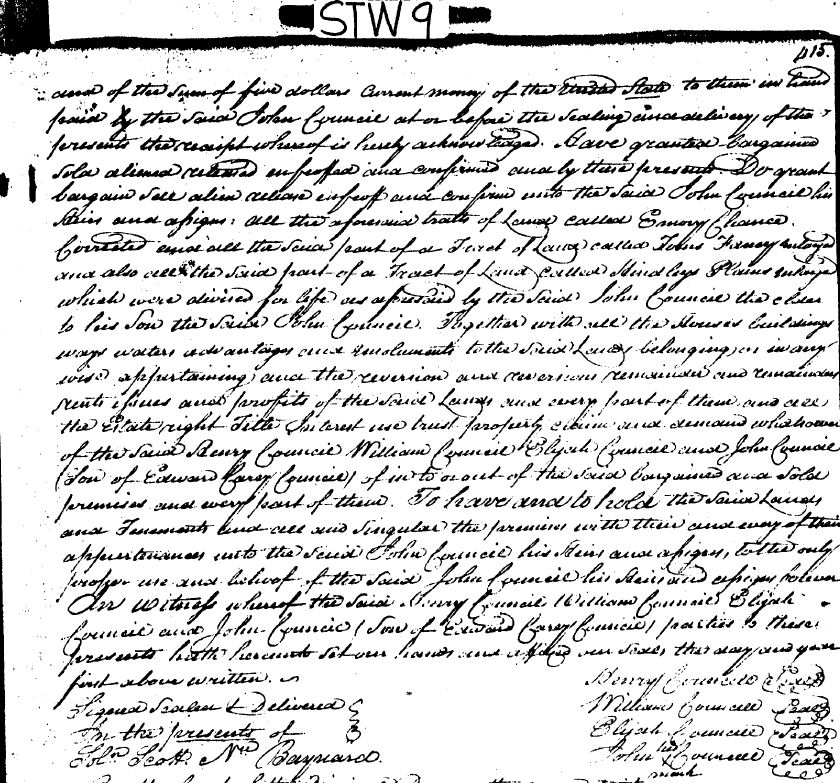 Page 415 continues the transaction and shows the signatures of Henry, William, and Elijah Councill and the mark of John Councill. John "the Elder" Councill was the son of Henry Councill. John the Elder's grandson John, son of Edward Carey Councill is my 3x great-grandfather. I will post John the Elder's will in a future post. It leaves parts of Hawkins Pharsalia to his sons Edward Carey, Samuel, and James and clearly leaves the tracts of land named above to his son John. Thanks to Cindy of the Eastern Shore Facebook group for pointing me to this entry!

Amanuensis Monday is a daily blogging theme which encourages the family historian to transcribe family letters, journals, audiotapes, and other historical artifacts.
All articles on this blog are © Copyright 2018 by Kathryn - Posted at 6:00 AM 0 comments

Wow, hard to believe it's been three years since I started Kathryn's Quest! I've made a lot of discoveries and new friends since starting the blog. In looking back at my posts, some of favorites are:

Happy Blogiversary to the other blogs that started on this date: Family Tree Gal and Indiana Dillmans! A big thanks to Geneabloggers and to all who emailed, posted and followed my blog. Hope to hear more from you in the coming year!
All articles on this blog are © Copyright 2018 by Kathryn - Posted at 12:00 AM 4 comments