I've been working my way through the Maryland, Register of Wills Books on FamilySearch.org to try and find any mentions of my 2x great-grandfather, Francis Councill. A possible baptism record for Francis showed that his parents were John and Ann Councill. This will is for Henry Counsil, who lived in Queen Anne's County, Maryland in the 1700s. Francis also lived in Queen Anne's, although I don't know for sure if he was born there or in one of the neighboring counties. The spelling of the name Councill varies a lot even in the same records and is sometimes spelled Councell. 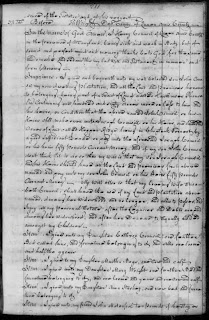 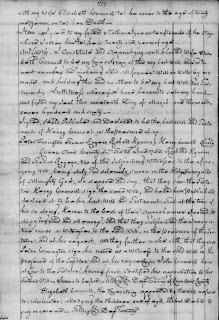 In the name of God Amen, I Henry Counsil of Queen Ann's County, in the province of Maryland, being sick and weak in Body, but of sound and perfect mind and memory thanks go to God for the same Do make and ordain this my last Will and Testament in manner and form following--

?. I give and bequeath unto my well beloved son John Counsil my ? dwelling plantation, and all the Land and premises hereunto belonging, being part of a Tract of Land called Hawkins Pharsalia containing one hundred and sixty acres more or less to him and his heirs, on condition that the aboved named John Counsil or his heirs shall make over unto Joseph Counsill or his heirs one hundred acres of land called Hogpen Ridge lieing in Choptank Forrest by a good sufficient deed or pay unto the aforesaid Joseph Counsil or his heirs fifty pounds current money, and if my son John Counsil don't think fit to do so then my will is that my son Joseph Counsil and his heirs should have all the land and premises ? above named and pay unto my son John Counsil or his heirs fifty pounds current money. My will also is that my loving wife Elisabeth Counsil, shall have the use of my land and plantation above named, during her widowhood and no longer, and also to possess and enjoy all my personal estate after the legasies and debts are paid during her widowhood, and after her decease to equally divided amongst my children.

Item. I give unto my daughter Cathron Counsill, one feather bed called hers, and furniture belonging to it and also one loom and half the gears.

Item. I give to my daughter Martha Bags, one cow and calf.

Item. I give unto my daughter Mary Wright one feather bed and furniture belonging to it, and one loom and gears and one cow and calf

Item. I give unto my daughter Anna Stashey (Anastasia?), one ? bed and furniture belonging to it.

Item. I give unto my friend John Materfod ten pounds if he stay on with my wife Elisabeth Counsil til comes to the age of twenty one years, or to her death.

Item. I give to my friend Nathan Kyzoan ten pounds if he stays where I order him til he is twenty one years of age.

And lastly, I constitute and apoint my well beloved wife Elisabeth Counsil to be my Executrix of this my last Will and Testament revoking and making void all former will or wills by me made and holding this and no other to be my last Will and Testament. In witness whereof, I have hearunto set my hand and fixed my seal this nineteenth Day of March, one thousand and seven hundred and sixty.

Signed, sealed Published and Declared to be the last Will and Testament of Henry Counsel in the presence of us

After the witnesses confirm that this was Henry's last will and testament, there is a final note:

Elizabeth Counnsill, the Executrix appointed by the will refused to administer, alledging the children are of age and ? debts to pay or receive.
==============

Several trees on Ancestry.com have Henry and his wife Elizabeth as being born in England and Elizabeth's maiden name as Banroche. From the wills of the sons, Joseph and John, it appears that John retained the land in Hawkins Pharsalia and Joseph retained Hogpen Ridge. Henry's son John died in 1796, so that couldn't be Francis' father since he was born around 1817. Both Joseph and John had sons named John, so that's where it starts to get complicated! I'll look at their wills in future posts.

Amanuensis Monday is a daily blogging theme which encourages the family historian to transcribe family letters, journals, audiotapes, and other historical artifacts.
All articles on this blog are © Copyright 2018 by Kathryn - Posted at 8:33 AM

Email ThisBlogThis!Share to TwitterShare to FacebookShare to Pinterest
Labels: Councill