I had great success with the Ohio Probate Records available on FamilySearch, so I was hoping for similar results for the Maryland side of my family. The Ohio records didn't have any searches available, so it was quite time consuming to browse the records.

Much to my surprise, there are some searchable records for Maryland and I quickly found estate settlements and wills for several of my ancestors in the Maryland, Probate Estate and Guardianship Files, 1796-1940. There are 72,764 records available to search. Many more are available to browse in the Maryland, Register of Wills Books, 1629-1983.

Following is the will of my 2x great-grandfather, Francis Councill.

I Francis Council of Queen Anne's County in the State of Maryland do hereby make and publish this to be my last will and testament.

1st I give and devise to my son Robert Council that part of my real estate on the right of the Public Road leading from Centreville to Queenstown, and whereon he now resides. Also the first on the left of said road which lies next to and adjoining the "White House" tract of land. Also enough of the field known as the "Old Orchard" field, as will when added to the two parts above mentioned give him an entire tract of land containing one Hundred and six acres. In cutting off the part from the old orchard field the division line shall run from the meadow to the fence between the said field and the field which adjoins it. Also one half of the woodland in front of where I now reside said one half to front on the Centreville and Queenstown Road.

2nd I give and devise to my son John Council the balance of my real estate whereon I now reside, lying on the left of said Public Road from Centreville to Queenstown and also the balance of said woodland.

3rd I give and devise to my son Richard Council the farm purchased by me from Christopher Strong, situate in the 5th election district.

4th I charge all the real estate above devised with an annuity of sixty dollars to be paid to each of my daughters (that is to say thirty dollars to each daughter) Frances Bramble and Marietta Weaver severally during widowhood only the sum of twenty dollars by each of my said sons or in that proportion.

On witness whereof I have hereto set my hand and seal this 23rd day of December 1886.

The will shows that Francis Council made his mark and it was witnessed by R. Goldsborrough and B. Palmer Keating.

Signed sealed published and declared by the above named testator Francis Council as and for his last will and testament in our presence and in presence of each other have signed our names as witnesses hereto sworn.

At the bottom of the page is a note from the Queen Anne's County Orphans Court, January 17th 1888: The foregoing will was duly examined by the Court, admitted to probate and ordered to be filed for record. This was signed by Thomas A. Bryan, Register of Wills.

I'm a bit puzzled that the will doesn't mention Francis' wife Mary or his other daughter Annie Dodd. The distribution shown in the estate settlement papers shows that they were included in the settlement. 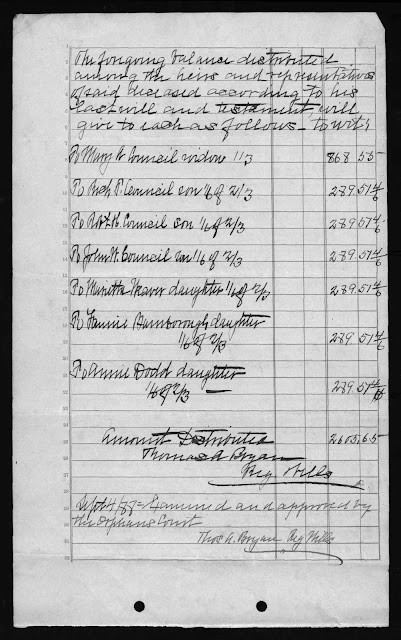 The foregoing balance distributed among the heirs and representators of said deceased according to his last will and testament, will give to each as follows to wit:

Sept 4/88=Examined and approved by the Orphans Court
Thos A. Bryan Reg Wills

The will and settlement papers gave me a good bit of information that I didn't have before. The will was written on 12/23/1886, filed on 12/27/1887 and admitted to the Orphans Court in May 1888. I don't have a date of death for Francis, so that narrows it down. The settlement also gives me the married names of his daughters and a description of his property. There are various spellings in the paperwork: Council, Councill, Councell and Frank was used as a nickname for Francis. My great-grandfather John W. Councill was one of the administrators of the will. I noticed that the daughter Frances' last name changed in some of the paperwork from Bamborough to Bramble.  It's possible that one of those was just recorded incorrectly.

Amanuensis Monday is a daily blogging theme which encourages the family historian to transcribe family letters, journals, audiotapes, and other historical artifacts.
All articles on this blog are © Copyright 2018 by Kathryn - Posted at 12:00 AM