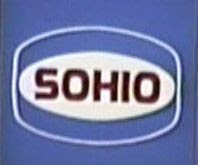 The 1930 census for Celina, Ohio showed that my grandfather Robert and his sister May were living at home with my great-grandparents, Charles and Anna Creeden. Charles' occupation was listed as Manager and the industry was Gas & Oil Station. This was a bit of a surprise, but fills in the gap between Charles' careers as County Sheriff in the 1920s and Postmaster starting in 1934.

A large ad in the Lima News on June 7, 1933 listed 277 independent merchants for Sohio gas and oil products. Charles was listed under the Celina dealers as Chas. Creeden & Son, so my grandfather must have worked at the station too. 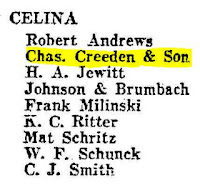 An article in the Lima News from May 10, 1929 detailed a rash of robberies that hit local filling stations.Charles was one of the victims and the robbers got away with $75 from his safe.

The article gave the name and location of the station as the Cameron oil station on S. Main St. in Celina and mentions that Charles was the former Mercer County Sheriff. Too bad that his days of dealing with criminals didn't end when he was no longer the County Sheriff!