In my last post on Edward Creeden, I had just received his service records from the Canadian Expeditionary Forces, where he served and was wounded in WWI.

One of the records had  "Deceased - 14 - 2 - 1937" written in red across it, but there was no other information about any records kept on Edward after his discharge in 1919. It didn't appear that he received a pension from the CEF, so it was a mystery to me as to how the CEF was informed of his death.


This death certificate for an Edward Creedon in Newport, KY doesn't give much identifying information, but the age is correct and the date of death matches the CEF form.

I wasn't 100% sure that this was my Edward until I discovered an index to two articles published in the Kentucky Post shortly after his death:


I found these in an online index of the Northern Kentucky Newspaper Index, made available through the Kenton County Public Library.

So, the plot thickens. What happened to Edward? I have requested copies of the articles from the library and I'm impatiently waiting for the "up to 30 days" to hear a response!

Editing to add that I received the articles in the mail today!  From the articles, Edward was not known locally and was tentatively identified from papers he had on him. The article mentioned that he was a Canadian War Veteran. I'm guessing he had some identification from the CEF and this led them to contact his brother Charles Creeden since he was listed as next of kin on Edward's CEF papers. That would also explain how the CEF got news of his death. The articles stated that Charles Creeden was Postmaster of Celina, OH, so this was definitely my Edward. According to one of the articles, Charles came to Kentucky to identify Edward and said that he hadn't seen him in 35 years. It was confirmed that Edward died of natural causes. There are still some mysteries surrounding Edward, but at least this one is solved!
All articles on this blog are © Copyright 2018 by Kathryn - Posted at 8:00 AM 0 comments

Week 4 – Free Offline Genealogy Tools: For which free offline genealogy tool are you most grateful? How did you find this tool and how has it benefited your genealogy? Describe to others how to access this tool and spread the genealogy love.

For a completely free tool, I'd have to say the library. I'd also have to admit that I don't use it nearly enough! For my Irish research, several people referred me to the O'Kief, Coshe Mang, Slieve Lougher and the Upper Blackwater in Ireland series. This is a huge collection of Irish records compiled by Albert E. Casey covering parts of County Cork and County Kerry. The closest library to me with this collection is a couple of hours away, but I finally got the chance to take a look at them when I was in town for a concert. I was able to use the indices for the volumes to look up the references to my Creedon/Creeden surname in the short time we had there. I didn't find anything I could tie to my Creeden ancestry, but I wouldn't have even had the chance to look without the free access provided by the library.

52 Weeks of Abundant Genealogy by Amy Coffin is a series of weekly blogging prompts (one for each week of 2012) that invite genealogists and others to discuss resources in the genealogy community including websites, applications, libraries, archives, genealogical societies and more.
All articles on this blog are © Copyright 2018 by Kathryn - Posted at 12:48 PM 0 comments

Week 3 – Free Online Genealogy Tools: Free online genealogy tools are like gifts from above. Which one are you most thankful for? How has it helped your family history experience?

Rootsweb was one of the first genealogy sites that I used and it has been one of the most productive for me. I've made many contacts on their message boards that have led to new information and some good friendships. I have my Creeden Genealogy site posted on their freepages and I've done many searches on their site. This is a good reminder for me to take a look back at what they offer since I have to admit I haven't visited their site for awhile.

Another group of sites that I've made much use of is the USGenWeb Project and its state and county sites. There is a wealth of information available on the county sites that can't be found anywhere else, plus there are usually some volunteers that do look ups or answer questions about the local history. It's a great starting place when you add a new location to your tree.

FamilySearch.org is a site that I always check. It's worth redoing searches on their site to see what's new. I recently found information for deaths in Clinton County, Ohio that I hadn't seen online before.

If you have Irish ancestors, the Irish Genealogy site is definitely worth a look. They only have records for parts of some counties so far, but I'm hoping that they continue to make updates.

52 Weeks of Abundant Genealogy by Amy Coffin is a series of weekly blogging prompts (one for each week of 2012) that invite genealogists and others to discuss resources in the genealogy community including websites, applications, libraries, archives, genealogical societies and more.
All articles on this blog are © Copyright 2018 by Kathryn - Posted at 10:17 PM 0 comments

My brother-in-law was looking through an old toolbox of my Dad's when he discovered a sheriff's badge! It was my great-grandfather Charles Creeden's badge when he was Sheriff of Mercer County, Ohio from 1923-1927. The badge is still quite shiny and in good condition. What a find! 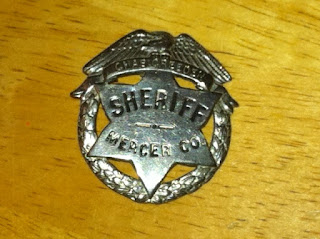 Treasure Chest Thursday is a posting prompt hosted on Geneabloggers with the main focus being a family treasure, an heirloom or even an every-day item important to your family. A special thanks to Leslie Ann Ballou of Lost Family Treasures for suggesting Treasure Chest Thursday as a daily blogging theme!
All articles on this blog are © Copyright 2018 by Kathryn - Posted at 9:11 AM 2 comments

My Sparks family was from Queen Anne's County, Maryland and at some point the family moved to Baltimore, MD. Samuel was a very common name for the males in the family and it has made it a challenge to distinguish between the families. Another common name was Robert, so that would be a guess for the middle initials. I suspect these first two death notices are not my direct family as I don't think they were in Baltimore yet, but the last one may be related to mine. I definitely have more research to do on this family to sort these all out! 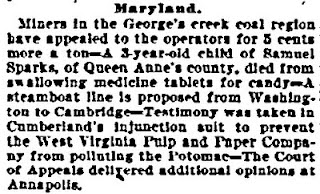 From The Sun, Baltimore, MD on March 23, 1900: A 3-year old child of Samuel Sparks, of Queen Anne's county, died from swallowing medicine tablets for candy.
All articles on this blog are © Copyright 2018 by Kathryn - Posted at 2:02 PM 0 comments

Week #2 – Paid Online Genealogy Tools: Which paid genealogy tool do you appreciate the most? What special features put it at the top of your list? How can it help others with their genealogy research?

The paid online site where I've gotten the most results is Ancestry.com. I've used their census, vital and military records, newspaper archives and family trees extensively. The message boards are also very useful for finding others researching the same names and places. I have alerts set up for message boards that I'm interested in and receive alerts if there is new information on my family trees.

While I don't have much of my family tree posted on their site, I've found it worthwhile to post a subset of my main trees. That allows people researching the same families to get in touch with me and Ancestry sends alerts to me if there is new information.

52 Weeks of Abundant Genealogy by Amy Coffin is a series of weekly blogging prompts (one for each week of 2012) that invite genealogists and others to discuss resources in the genealogy community including websites, applications, libraries, archives, genealogical societies and more.
All articles on this blog are © Copyright 2018 by Kathryn - Posted at 11:34 PM 0 comments

Week 1 – Blogs: Blogging is a great way for genealogists to share information with family members, potential cousins and each other. For which blog are you most thankful? Is it one of the earliest blogs you read, or a current one? What is special about the blog and why should others read it? 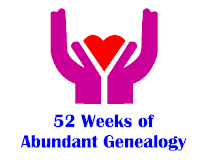 I'm happy to see that Amy Coffin has started a new series of blogging prompts for 2012. This is the first in the series for 52 Weeks of Abundant Genealogy.

The blog I'm most thankful for is Thomas MacEntee's GeneaBloggers. I ran across his blog a little over a year ago and not only is it a wealth of information on genealogy, but he provides an excellent way for genealogists of all experience levels to join the blogging community. I especially enjoy the way he rounds up the various prompts of the day with links to the bloggers that have posted. I've learned a lot over the past year since I started my own blog and much of it is thanks to Thomas and his blog.

52 Weeks of Abundant Genealogy by Amy Coffin is a series of weekly blogging prompts (one for each week of 2012) that invite genealogists and others to discuss resources in the genealogy community including websites, applications, libraries, archives, genealogical societies and more.
All articles on this blog are © Copyright 2018 by Kathryn - Posted at 6:15 PM 2 comments