The will of John Meredith leaves his estate to his four children, John Meredith, William Meredith, Thomas Meredith, Sarah Cofton, and a grandson James Meredith. The will was signed on July 14, 1764 and probated in Queen Anne's County, MD.

One of the witnesses to the will was Henry Councell and the will mentions a tract of land called Tom's Fancy Enlarged that was named in land records for my Councill family. This copy of the will comes from MD wills, Vol. 31-32, available on Ancestry.com. 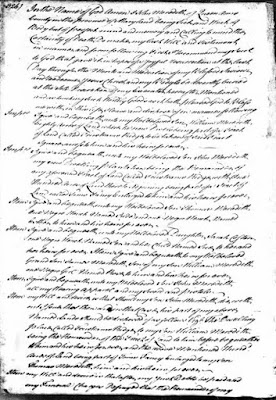 In the name of God Amen. I John Meredith, from Queen Anne County and the province of Maryland...

Item: I give and bequeath to my beloved son, William Meredith, eighty acres of land where he now dwells being part of a parcel of land called Tristram's? Ridge to be taken of said tract square ? to him and his heirs forever.

Item : I give and bequeath unto my beloved son John Meredith my now dwelling plantation being the remainder of any ? track of land called Tristram's Ridge with hundred acres of land thereto adjoining being part of a land called Tom's Fancy Enlarged to him and his heirs forever.

Item: I give and bequeath unto my beloved son John Meredith all my wearing apparel and my sword and pistols.

Item: My will and desire is that should my son John Meredith die without issue? that then and in that case his part of my above named land should be divided up as follows Viz The dwelling ? called Tristram's Ridge to my son William Meredith being the remainder of the tract of land to him before bequeathed to him and his heirs forever, and the above mentioned ? acres of land being part of Tom's Fancy Enlarged to my son Thomas Meredith, him and his heirs forever.

Item: My will and desire is that after my just debts be paid and my funeral charges defrayed that the remainder of my estate to be equally divided between my above named four children Viz. William John Thomas and Sarah, and I do hereby constitute and appoint my beloved son John Meredith my sole executor of this my last will and testament hereby ? all other will and .. 14th day of July in 1764. 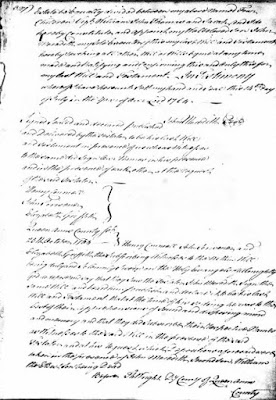 My 2x great-grandfather Francis Councill married Mary Ann Meredith, daughter of John Meredith and Elizabeth Hall. Mary's father John was born around 1800, so he is not the one named in this will. I suspect that the John Meredith that wrote the will is connected to my family, but I need to link up another generation or two to make the connection.

Amanuensis Monday is a popular ongoing series created by John Newmark at Transylvanian Dutch.
All articles on this blog are © Copyright 2018 by Kathryn - Posted at 8:57 AM 0 comments