Memorial Day is a day to remember and honor the men and women who gave their lives while serving in the US Armed Forces. In honor of Memorial Day, Family Tree Magazine's genealogy insider blog recently listed 11 free sites that can be used to research Americans who've died in military service.

One of the sites listed is Arlington National Cemetery's ANC Explorer. The website allows you to locate gravesites, view photos of headstones, and take a virtual tour of the cemetery. Both a mobile app and web browser application are provided. This app wasn't available last time I looked at the Arlington website, so I decided to give it a try on my home PC.

My great-uncle Julius Councill was killed in action on August 12, 1918 in a battle in Fismette, France during WWI. Searching for Julius Councill on the ANC Explorer page brought up a display of a map of Arlington with a marker showing the location of Julius' grave site. Selecting the marker brought up details on Julius' grave and a small photo of his headstone.

The Details button brought up larger photos of the front and back of the headstone and the option to download the photos shown below. 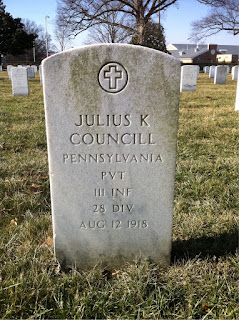 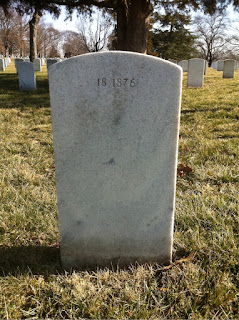 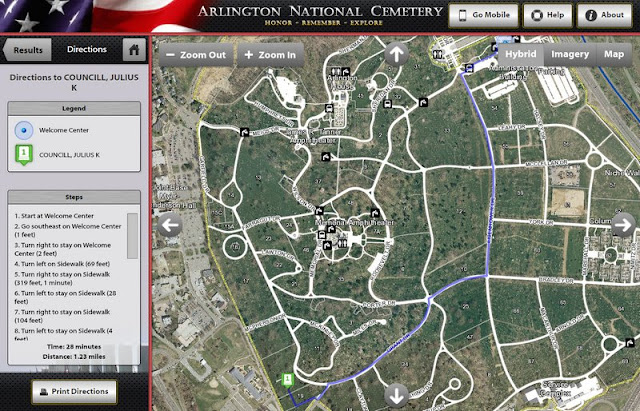 Zooming in on the map showed that the Argonne Cross is not too far from Julius' grave. 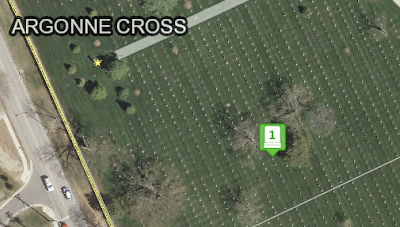 This explained why Julius was buried in Arlington three years after his death. His burial case file included several forms filled out by Julius' mother Arianna Councill requesting that his remains be moved from France to Arlington Cemetery. I had no idea so many servicemen were moved to Arlington during that time.

If you have family buried at Arlington or are planning a visit there, I'd definitely recommend giving the ANC Explorer app a try. One thing to note is that the site says the tool is still under development and not all graves are included yet.
All articles on this blog are © Copyright 2018 by Kathryn - Posted at 12:30 AM 0 comments

The Gast family of Celina, Ohio suffered the tragic loss of four family members to the Spanish influenza epidemic of 1918. Two sons of Mr. and Mrs. John Gast died on December 8 and December 11, 1918. That was followed by the death of John's mother Catherine Desch Gast on December 12, 1918. John's sister Antoinette "Mattie" Gast Ockuly died on December 23, 1918. It's hard to imagine losing so many in the family that quickly.

The following obituaries appeared in the Celina Democrat on December 13, December 20,  and December 27, 1918. I found them online at Chronicling America. The site has the weekly Celina Democrat available online for the years 1910 to 1918.

GAST BOYS VICTIMS OF INFLUENZA
Carl and Eugene Gast, ages 17 and 18, respectively, sons of Mr. and Mrs. John Gast, of North Cherry street, are both dead as the result of the dread Spanish influenza.
Both were ill but a few days. Carl, the youngest of the two boys, passed away Sunday. Eugene's death occurred Wednesday. Medical science failed to stay the hand of the relentless reaper.
Both boys were the pride and hope of their parents, were favorite among their fellows, and enjoyed the confidence and esteem of all whom they came in contact.

THE GRIM  REAPER
Mrs. John Gast, sr. (nee Desch), aged 64 years, one of the best known women of this city, died a week ago last night, after a week's illness of influenza. She had been at the home of her son John nursing the two grandsons,whose deaths were chronicled last week, until a few days preceding her death. Grief over the loss of her grandchildren and the absence of her youngest son Leo at Camp Merritt no doubt broke her spirit and hastened the death of the good woman.
The deceased was a daughter of the late Mr. and Mrs. Ferdinand Desch, and was born at St. Johns, April 23, 1854. She was married to Mr. Gast in 1871. Five years later they came to Celina. where they since resided. The deceased is survived by her husband and eight children—John. jr., Andrew, Leo. Matilda, Sister Margaret, Mrs. Geo. Pulskamp, Mrs. P. A. Ockuly and Mrs, Alex Miller, of Ottawa.
Funeral services were held Monday evening and the remains deposited in the mausoleum to await the arrival of her son Leo before her interment.


Mrs. P. A. Ockuly (nee Gast), aged 32 years, died at the home of her father, John Gast, sr., last Monday night. Mrs. Ockuly had been ill for three weeks or more from an attack of influenza, and the deaths of her two nephews, followed closely by that of her mother, no doubt had a very depressing effect upon her and contributed much to her final dissolution.
The deceased for many years was employed at the Bote office, and was highly esteemed by a large circle of acquaintances. She was wedded to Mr. Ockuly only last April. Funeral services were held at the Catholic church yesterday.

Catherine Desch Gast was my 3x great-grandmother. Her daughter Mary married my 2x great-grandfather George F. Pulskamp in 1899. George Pulskamp was the publisher of the German Bote newspaper mentioned in the obituary of Mrs. P. Ockuly.
All articles on this blog are © Copyright 2018 by Kathryn - Posted at 2:39 PM 0 comments