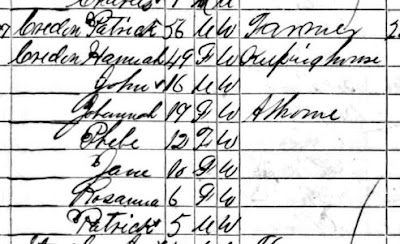 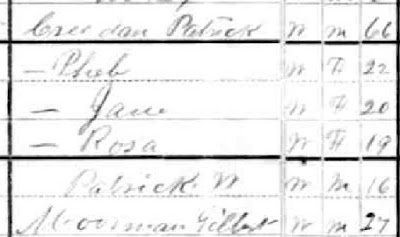 I've found several more records that could be for Patrick William, but the name given is William or W. P. Creeden. My guess is he may have gone by William since his father's name was also Patrick. 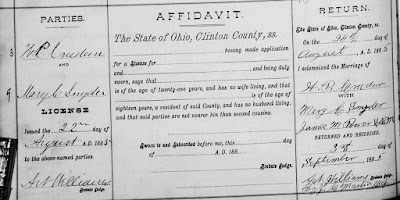 In 1887, Quaker records from Clinton County show that a John and William Creeden were received by request. The record lists John's wife Minerva and his son Hiram, but no family for William. In 1889, there is a disunity record for John, Minerva, Hiram and William, meaning that they left the Quaker group or were asked to leave for some reason. Although I can't tell for sure who William is, the John in the records is a match for the son of Patrick Creedan and brother of Patrick William Creedan.

In the 1900 census, William and Mary C. Creeden are living in Darke County with their children Minnie, Elsie, Orval, Ralph, Elzworth, William, and Mary O. They've been married for 15 years. The entry right above them is for a John and Ida Creedan and their children Flora and Stella. This is a match for Patrick William's brother John and John's second wife Ida. William's birth date is May 1864 according to this census record. 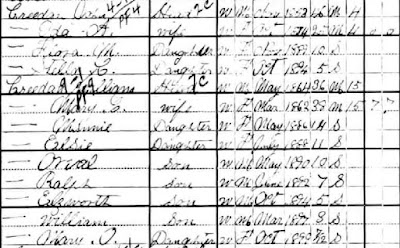 Kansas had a state census in 1905 and William and Mary C. Creeden are living in Sedgwick County as of March 1, 1905.The same children are listed, plus Violet. It looks like Mary O. from the 1900 census goes by Opal in this census. John Creedan lived out his life in Darke and Mercer counties in Ohio and died in Mercer County in 1923. William died in 1909 and is buried in Pratt, Kansas. His gravestone says he lived from 1862-1909, so that birth date is a bit earlier than any of the census records. 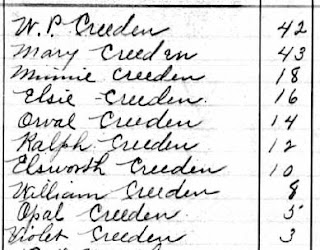 There is another William Patrick Creeden of about the same age in Ohio during this time. This William was the son of Timothy and Ellen Creeden in Hamilton County. A marriage record for him showed that he married Margaret Nolan in 1883 and consent was given by his father Timothy.

In the 1900 census record shown above, William and Margaret Creeden are living in Hamilton County with children Thomas, Michael, and Laurence. William was born in Feb. 1863. Timothy and Ellen also had a son named Laurence, so that name seemed to run in their family. I mention this William since I've seen records for him confused with the William who went to Kansas.

A death certificate and/or obituary for the Kansas William might help clear this up, but so far, I've been unable to find one online. According to the Kansas Historical Society, death certificates weren't kept by the state until 1911. Records before that may have been kept at the county or city clerk's office, but not all of these survived. The historical society has microfilm for some vital records, but I don't see anything for Pratt or Sedgwick. I'll post an update if I locate any additional records.
All articles on this blog are © Copyright 2018 by Kathryn - Posted at 11:43 AM 2 comments

My 3x great-grandfather Patrick Creedan was from County Cork, Ireland. He had at least two children baptized in Clondrohid Parish in County Cork with his wife Mary Coakley. Patrick's daughter Julia was baptized there in 1842 and his daughter Honora in 1848. His son Timothy was born in 1846, but those records seem to be missing.

Patrick was born on March 17, 1814 according to his tombstone. I found a couple of possibilities for baptism records for him on the National Library of Ireland site. On Page 37 of Microfilm 5002/05, there were two Patricks baptized in March 1814 in Clondrohid.

The first Patrick was baptized on March 8, 1814 to parents Tim and Julian Creedan in Clondrohid, County Cork. The address given was Carigapuca and the sponsors were Michael Buckley and Johanna Creedan. The second Patrick was baptized on March 14, 1814 to parents Dennis and Mary Creedan. The address was Baurthanaknuck and sponsors were Timothy Murphy and Johanna Creedan. No maiden names were given for the mothers. The Creedan spelling seems to be the most common in this area, but I've seen Creeden and Creedon in some of the other locations.

Since my Patrick had children named Timothy and Julia, the first one seems like the best possibility. The first one also has the same address as that given when Patrick's daughters Julia and Hanora were baptized. If his tombstone is correct, neither of these is quite a match for a baptism date, but I didn't see any other good matches for the months following March. Also of interest on this page, there are several Coakleys. Patrick married Mary Coakley sometime before July 1842, but I haven't found a marriage record for them so far.

These Christmas ads were published in the Celina Democrat newspaper in Ohio on December 14 and December 21, 1899. 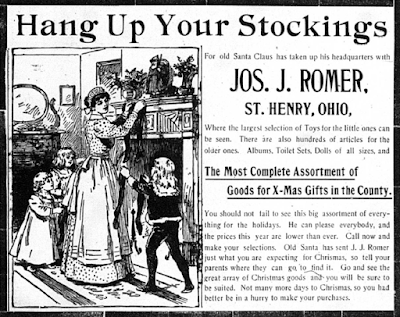 I love the drawing of the family with a glimpse into their home at Christmas. Dolls and toys were mentioned in many of the ads published on December 14. I was surprised to see the "X-Mas" spelling used in several of the ads. 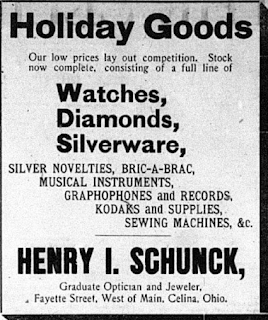 This ad from December 21 was from optician and jeweler Henry I. Schunck. In addition to jewelry, he had an interesting collection of items for sale from novelties to musical instruments, Graphophones and records, Kodaks, and sewing machines. The Graphophone was an early record player that played wax cylinder records. 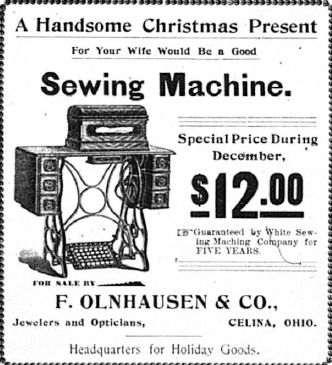 This ad was published on December 14, 1899 and is from another combination jeweler and optician. Sewing machines seemed to be a big item that year and what a bargain for $12!

Thanks to the Ohio History Connection for scanning the microfilm pages for me. The Celina Democrat is available online at Chronicling America for the years 1910-1918. The Ohio History Connection has additional years available on microfilm, starting with 1898.
All articles on this blog are © Copyright 2018 by Kathryn - Posted at 12:48 PM 0 comments