Patrick Creedan was born around 1814 in Ireland and lived in Clinton County, Ohio for many years. He died on June 19, 1883 and is buried in the Gaddis Cemetery in Wilmington, Clinton County. I believe that my gg-grandfather Timothy Creeden is Patrick's son Timothy named in the will. Timothy was named guardian of Patrick's daughter Roseanna shortly after his death and continued as her guardian when he moved to Mercer County, Ohio. I found the will in the FamilySearch Ohio Probate Records in the volume for Wills 1886-1889 Vol 3-4.

Following is Patrick's Last Will and Testament as filed in the Clinton County Probate Court. 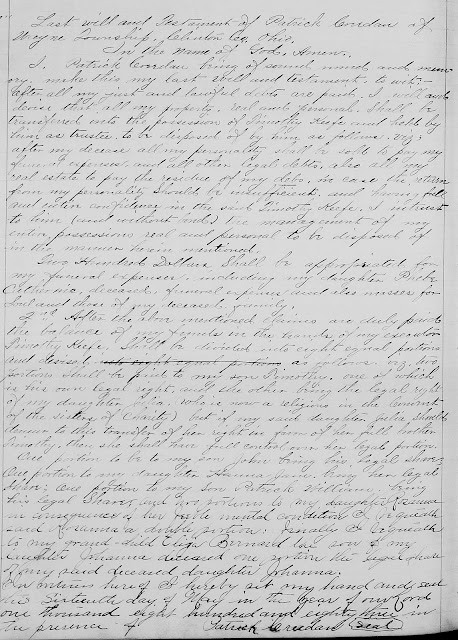 Last Will and Testament of Patrick Creedan of Wayne Township, Clinton Co. Ohio.


In the name of God, Amen.
I, Patrick Creedan, being of sound mind and memory, make this my last will and testament, to wit:- After all my just and lawful debts are paid, I will and devise that all my property, real and personal, shall be transferred into the possession of Timothy Keefe and held by him as trustee to be dispersed by him as follows. viz; After my decease all of my personality shall be sold to pay my funeral expenses and all other legal debts. Also all my real estate to pay the residual  of my debts in case the return from my personality should be insufficient and having full and certain confidence in the said Timothy Keefe. I entrust to him (and without bond) the management of my possessions real and personal to be disposed of in the manner herein mentioned.

Two Hundred Dollars shall be appropriated for my funeral expenses, including my daughter Phebe Catherine, deceased, funeral expenses and also masses for soul and those of my deceased family.

2nd After the above mentioned claims are duly paid the balance of my funds in the hands of my executor Timothy Keefe shall be divided into eight equal portions and devised as follows. viz; Two portions shall be paid to my son Timothy. One of which is his own legal right, and the other being the legal right of my daughter Julia, (who is now a religious in the Convent of the Sisters of Charity) but if my said daughter Julia should demure to this transfer of her right in favor of her full brother Timothy, then she shall have full control over her legal portion.

The will is witnessed by Michael O'Donoghue and Bridget Keefe.


Amanuensis Monday is a daily blogging theme which encourages the family historian to transcribe family letters, journals, audiotapes, and other historical artifacts.
All articles on this blog are © Copyright 2018 by Kathryn - Posted at 12:30 AM