This week's 52 Ancestors prompt is "Invite to Dinner." Which ancestor would you most want to invite to dinner? Do you have a story of a memorable dinner with an ancestor? Is there a special recipe that's been handed down? 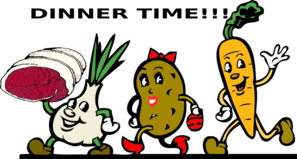 I remembered doing a similar prompt back in 2011 for the Fearless Females series, so I took a look back to see what I said then: "While we're fantasizing, the special guest of honor would be my gg-grandfather's mother from Ireland so that she could tell us where she comes from, her and her husband's names and if Timothy had any siblings!"

From Timothy's obituary, Mary died when Timothy was only 3 years old, so sometime between March 1849 and March 1850. Patrick had already come to Ohio and was working on a farm. He sent for Timothy and Julia, but there was no mention of Hanora.

Julia and Hanora were both baptized in Clondrohid, County Cork, Ireland and their address was given as Carrigapooka. So, I can answer most of the questions from my 2011 post, but now of course I'd like the same questions answered for Mary and Patrick!

#52Ancestors is a series of weekly family history prompts developed by Amy Johnson Crow.
All articles on this blog are © Copyright 2018 by Kathryn - Posted at 3:23 PM 0 comments

Before deciding on what to write for this prompt, I took a look at the ages at death of the ancestors in my family tree. There were a couple of people that lived to be over 100, but they were related through marriage and not in my direct lines. There were also a lot of people that I don't have birth or death dates for, so I still have some research to do there.

As I looked at the people that lived into their 90s, I noticed that a lot of them were descendants of my Hagedorn family. The Hagedorns were born in Germany and came to the US in 1834. Hermann Hagedorn was born on February 13, 1778 and died in Mercer County, Ohio on October 1, 1877 at the age of 93. Hermann's wife C. Maria Elizabeth Tebben was born in 1786 in Hannover, Germany and died on October 1, 1877, in Mercer County, Ohio, at the age of 91. That's amazing to think that a couple born in the 1700s both lived into their 90s!

The graphic below shows my direct line from the Hagedorn family and their ages at death. 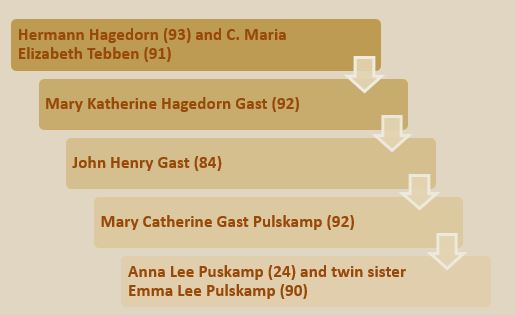 Hermann and Elizabeth had two sons and three daughters between 1813 and 1825, so the children were born in Germany too. Their daughter Mary Katherine Hagedorn Gast was my 3x great-grandmother. She was born on May 7, 1823 and died on Nov 11, 1915 in Maria Stein, Mercer County, Ohio at the age of 92. Five children survived her, including my 2x great-grandfather, John Henry Gast. An interesting note from her obituary is that she lived to see the golden wedding anniversary of her daughter Mrs. Henry Schaefer.

My great-grandmother Mary Catherine Gast was born on March 8, 1875. She married George Francis Pulskamp on August 18, 1899, in Mercer County, Ohio. They had eight children in 17 years, including my grandmother Anna Lee Pulskamp. Mary died on December 7, 1967, in Celina, Ohio, at the age of 92.

My grandmother Anna Lee Pulskamp and her twin sister Emma Lee Pulskamp were born on June 11, 1910, in Celina, Ohio. Sadly, Anna Lee died a few days after childbirth in 1934 and only lived to be 24 years old. Emma Lee died on March 15, 2001, in Celina, Ohio, at the age of 90. Their brother Andreas lived to be 91 and their sister Marie Catherine lived to be 95, so there was a lot of longevity in their family. I'm hoping some of it was passed down to my generation!

#52Ancestors is a series of weekly family history prompts developed by Amy Johnson Crow.
All articles on this blog are © Copyright 2018 by Kathryn - Posted at 4:03 PM 0 comments 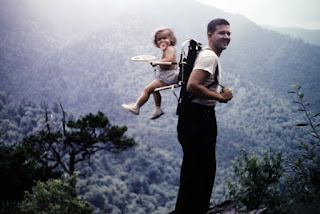 This is a photo of my Dad taking me on one of my first hikes in the Smoky Mountains. My Mom took the photo sometime in the early 1960s and I'm guessing it was a nice summer day from the short sleeves and green trees. We lived in Knoxville, TN for a few years and the Smokies have been a favorite vacation spot for our family ever since.

A faded version of this photo sat on my Dad's desk for as long as I can remember. We had our Dad's large slide collection digitized a few years ago and I was pleasantly surprised to find this one in the collection.

#52Ancestors is a series of weekly family history prompts developed by Amy Johnson Crow.
All articles on this blog are © Copyright 2018 by Kathryn - Posted at 1:46 PM 0 comments

Email ThisBlogThis!Share to TwitterShare to FacebookShare to Pinterest
Labels: 52 Ancestors in 52 Weeks

This is my first post for the 2018 edition of 52 Ancestors in 52 Weeks and the prompt for this week is simply "Start". Each week I'll be sharing a bit about an ancestor based on the weekly prompt from Amy Johnson Crow.

"Start" makes me think of how I got my start in genealogy. I remember doing a homework assignment in the ninth grade to draw a family tree chart for one of my ancestors. My parents didn't know too much about any of our ancestors' origins, but we knew that my 2x great-grandfather Timothy Creeden had come from County Cork. When I say we knew this, there was no proof, but just the family legend passed down from my great-grandfather Charles Creeden. I wish I had still had that homework assignment, but I'm guessing it looked a bit like this chart my Dad drew for me around 1999. Full details on my Dad's initial guesses on our Creeden family are here: Initial Creeden Chart. 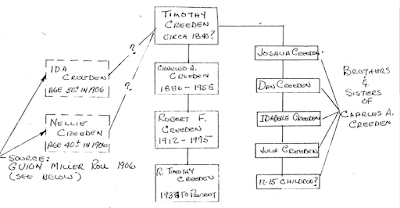 I was finally able to connect Timothy to his family through his father Patrick Creedan's will, court records in Clinton County and Mercer County, Ohio, and his sister Julia's service as a nun in the Sisters of Charity. Julia's death certificate gave her parents' names as Patrick Creedon and Mary Coakley and her baptism record gave the location as Clondrohid, County Cork, Ireland.

When I finally found Timothy's obituary, it helped confirm I had the right family and provided details on his immigration through New Orleans. He was only three when he came over, so no wonder we didn't know too much!

I recently posted my latest Creeden tree here: Creeden tree. There are still some mysteries, but I've come a long way since that ninth grade homework assignment!

#52Ancestors is a series of weekly family history prompts developed by Amy Johnson Crow.
All articles on this blog are © Copyright 2018 by Kathryn - Posted at 3:28 PM 0 comments

Email ThisBlogThis!Share to TwitterShare to FacebookShare to Pinterest
Labels: 52 Ancestors in 52 Weeks, Creeden

It's been seven years since I started Kathryn's Quest! Thanks to everyone that read, commented, or contacted me through the blog over the last seven years. It's been great to chat with others doing similar research and to interact with fellow bloggers.

This year I'm going to participate in the 52 Ancestors in 52 Weeks prompts led by Amy Johnson Crow. I may not do all of the prompts, but my goal for this year is to post at least once a week.

Thanks also to the team at GeneaBloggers TRIBE for continuing to support the genealogy blogging community. Here's to the next seven years!