This obituary for my 2x great-grandfather Timothy Creeden confirms a lot of the information I'd pieced together from probate records. Finally, some proof that I have the correct family! While it doesn't mention his father Patrick by name, it mentions his sister Julia. An unexpected surprise was the story of his immigration to the US. Timothy was only 3 years old when he arrived at the Port of New Orleans with his 7 year old sister Julia. The two children traveled under the care of a friend. That places their immigration date somewhere between March 1849 - March 1850.

Timothy Creeden, a well-known citizen of this city. died last Thursday. Dec.14 of consumption. He was born In Ireland March 23. 1846. Mr. Creeden's father was a sturdy Irishman. who sought relief from the oppression of England. and came to this country to prepare a home for the wife and children. Shortly after he arrived in this country the wife died and the children were sent for. Timothy Creeden was three years old when. In company with his sister Julia. they sailed for America under the care of a friend. They were met at New Orleans by their father and they came up the river and settled at Wilmington. Ohio. Here the early youth of the deceased was spent and the character moulded. On December 10, 1868, he was united in marriage to Miss Mary Matson. Rev. Father Donahue officiating. Of this union ten children were born, eight of whom survive him -- Mrs. Mary Fischer, Daniel, Dennis, Edward. Charles, Julia, Idabelle and Joshua. In 1883? they moved to this county and have resided here ever since.  He was a kind and loving husband and father and an upright citizen. Funeral services were held at the Catholic Church last Sunday.
Mr. Creeden had heen a member of the Catholic Knights of Ohio for the past six years and his heirs will draw from the organization the sum of two thousand dollars. He was the first member of the local organization to die.

Dear father, thou hast left me.
Hast gone to thy eternal home.
Where we expect to meet you.
And meet to part no more.

Mrs. Mary Creeden and children desire to express their heartfelt thank to those who so kindly assisted them during the illness and after the death of their husband and father.

Ohio Public Records Index - Provides an index to Ohio death certificates and records for Ohio Industrial Schools searchable by name, county, and years. Names are spelled as they were entered into the index, so you may have to try variations. Only certain years are covered as stated on the main index page.

Newspaper index - This index lists their newspaper resources by county or city. Other documents available for the selected area are also provided in the search results.

Photocopy requests - Instructions on how to request photocopies of records in the archives. I had great success with this! I requested scans of microfilm images for a few issues of the Celina Democrat newspaper and received digital copies of the pages within a couple of days after making payment. Their email response was quick and very helpful and the quality of the scans was excellent.

This is just a sampling of what's available on their site. Thanks to the Ohio History Connection for providing such a valuable resource!

Note: "Flag of Ohio" image designed by John Eisenmann, SVG code by SiBr4 -  Licensed under Public Domain via Commons
All articles on this blog are © Copyright 2018 by Kathryn - Posted at 12:35 PM 2 comments 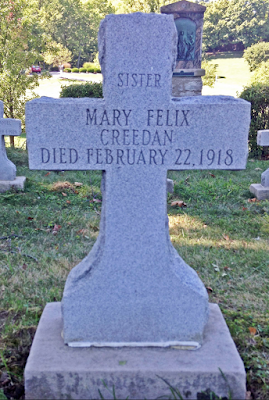 Sister Mary Felix was born in Ireland in July 1842 as Julia Creedan. Her parents were Patrick Creedan and Mary Coakley and her brother was my 2x great-grandfather Timothy Creeden. Julia was baptized in Clondrohid Parish, County Cork on July 3, 1842 and was in Clinton County, Ohio by 1860. She entered the Sisters of Charity convent in Cincinnati, Ohio in 1870 where she took the name Sister Mary Felix. She is buried in the Sisters of Charity cemetery in Mount St. Joseph's, Ohio. Thanks to JP Finn for taking the photo and posting it on FindAGrave.
All articles on this blog are © Copyright 2018 by Kathryn - Posted at 3:52 PM 0 comments

My 3x great-grandparents John Chilcutt and Catherine Harmon were living in Caroline County, MD in 1850. Their last name was spelled Chilcote and John's occupation was given as Carpenter in the census record.

There are three children in the household: Mary A., age 3, Caroline A., age 1, and James M., who was a few months old.

In the 1860 census, the family is in Talbot County, MD. This time John's name is recorded as John W. Chilcutt and his occupation is given as Farmer. 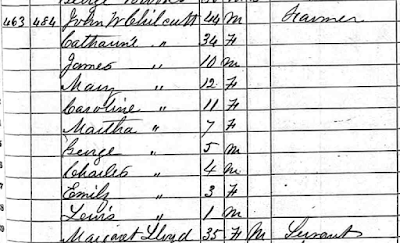 I didn't find any definite entries for the family in the 1870 census, but there were some Chilcutts with some of the children's names living with other families. It's possible that John and/or Catherine died by 1870 and the family was split up. George was married to Kate Covey by the time of the 1880 census, but I didn't find him in 1870. I'll post an update when I find out what happened to the family after 1860.
All articles on this blog are © Copyright 2018 by Kathryn - Posted at 6:38 PM 0 comments