In a previous post I traced my Willis family from the 1850 to 1900 census records.This post traces my great-grandfather Eugene Willis in the census records from 1910 to 1940.

In 1910, Eugene Willis and the family were living with his brother Henry in Centreville, Queen Anne's County, Maryland. Eugene and Henry were born in Delaware and were farmers. Eugene's wife Pearl and their children were all born in Maryland. They have three children in this census: my grandmother Edna, age 5, Oleda, age 3, and Pauline, age 1. The census states that Eugene and Pearl had been married for six years.


In 1920, the family is living on its own in the 7th District of Queen Anne's County, MD. In addition to Edna, Oleda, and Pauline, they have Edward, age 9, Edith, age 7, and William, age 5. Eugene's occupation is Farmer.


Some big changes took place in the family between 1920 and 1930. Eugene is living in Lansdale Borough, Montgomery County, Pennsylvania with his daughters Oleda and Pauline. Eugene is a farm laborer and his daughters are working as machine operators in a pants factory. My grandmother Edna married Royce Councill in 1925, so that explains why she's not living with her father. The census record states that Eugene is still married, but I know that Pearl and Eugene were divorced at some point. That may explain why Pearl isn't in this census.

By 1940, Eugene is living with his son Edward Willis in Boothwyn, Delaware County, Pennsylvania. His birthplace is given incorrectly as Maryland. His daughter Edna is living nearby with her husband Royce Councill and their four daughters. Eugene's ex-wife Pearl is also living nearby with her second husband Raymond Henry. Eugene and Pearl's son Howard Willis is living with Pearl and was born in 1922 in Maryland, so I would guess they separated sometime after that. I'll trace Pearl through the census in a future post.

Source for census images: Ancestry.com. 1910-1940 United States Federal Census [database on-line] Census Sunday is a daily blogging prompt suggested by Colleen Pasquale of Leaves and Branches.
All articles on this blog are © Copyright 2018 by Kathryn - Posted at 5:03 PM 0 comments

Marriage license books from the Circuit Court of Queen Anne's County, MD are available online through the Maryland State Archives. The licenses are in scanned books and cover most years from 1817-1906.

The following license is for John Meredith and Elizabeth Hall. The date on the record is Feb. 5, 1823 and the officiant was Rev. Reed. A fee of $4.00 was paid. According to the information on the Maryland State Archives site, the date recorded by the clerk was the date of the marriage.

The entry is number 191 on page 64 of the book. The entries on this page are for 1824, so it appears the clerk may have made a mistake in recording the date.

According to a comment I received on a post about Francis and Mary Councill, John Meredith and Elizabeth Hall were the parents of Francis' wife Mary Meredith. They would be my 3x great-grandparents.

The commenter also mentioned that Mary's grandfather was Richard Hall and Mary had a brother named John Thomas Meredith. Mary and her brother were raised by Richard Hall after John Meredith died in 1830 and Elizabeth died in 1833. Thanks to H. Meredith for the information!
All articles on this blog are © Copyright 2018 by Kathryn - Posted at 12:30 AM 0 comments

A few years ago I created an ethnicity chart based on what I knew about the origins of the main lines in my family tree. 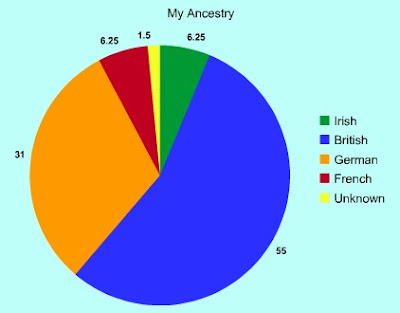 This chart assumes that percentages were passed straight down through each generation, so a great-great grandparent represents 6.25% of my ancestry. I know the DNA passed down is much more random than that, so this was just a guesstimate at best.

For this chart, I put my Mom's origins at 100% British, but I've since found out that she may have some other European and Irish roots. My Dad's heritage was about 64% German, 12% Irish, 12% French, and 12% British/Unknown on paper. That gave me the following percentages:

My Mom and I had our DNA tested through Ancestry.com last year, so I was curious to compare the DNA results to my original estimates based on my paper tree.

Here's my breakdown from Ancestry.com: 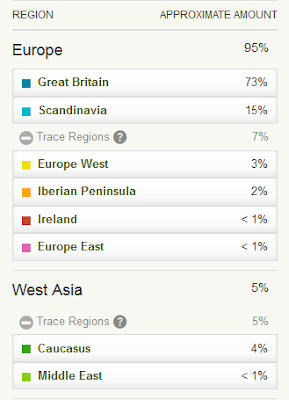 The first mystery was what happened to my Irish and German heritage? The second was where did all the Scandinavian DNA come from? I can guess that at least some of my German and Irish heritage is showing up as Scandinavian and/or British.

Even more surprising was my Mom's chart which looked more like what I expected mine to look like. She came up with 54% Great Britain, 27% Europe West and 13% Ireland and only 3% Scandinavian.

Given, that 50% of our DNA comes from each parent, this seems to indicate my Dad had a much higher percentage of British and Scandinavian roots than I can account for. Even if all of the DNA I inherited from my Mom was from her British lines, that would mean 23% of the British came from my Dad.

I transferred my results to Family Tree DNA and got the following breakdown: 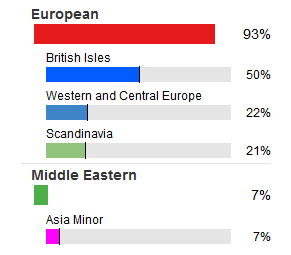 Their definition of British Isles includes Ireland. This looks closer to what I expected, but shows an even larger Scandinavian percentage. On this chart, I have 22% Western and Central Europe vs. the 3-6% from Ancestry.com.  My British Isles percentage dropped from 73% on Ancestry.com to 50%. That's quite a difference!

I also took a look at some of the Admixture tools on Gedmatch.com. For another comparison, here are my results with the Eurogenes EUTest: 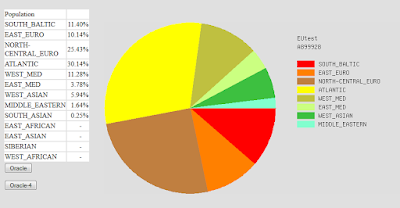 Interesting that my Mom's results are very similar to mine on the Eurogenes EUTest admixture. We both had around 30% Atlantic and 25-27% North Central Europe. Finding out exactly what the groupings mean on this chart is another challenge which I'll save for a future post.

So, what does any of this mean? Each admixture chart is based on different algorithms and population databases, so comparing them against each other doesn't mean too much. According to Ancestry.com, the number of reference samples for a region and the similarity of one region to another can affect the accuracy of the results. In particular, they state that their results for Great Britain and Europe West are less accurate than for most of the other regions.

I would think the results will become more accurate as more people get tested and the reference populations for each region are refined. While the charts are fun to look at and can provide some clues on your origins, I wouldn't draw any conclusions from them.
All articles on this blog are © Copyright 2018 by Kathryn - Posted at 5:08 PM 0 comments