Week #47 – Fall. What was fall like where and when you grew up? Describe not only the climate, but how the season influenced your activities, food choices, etc.

With the arrival of fall in Florida, the weather emphasis shifts from tropical storms to cold fronts. The cold fronts take the temperatures down into the 60s or 70s for a few days, but it's never long before it returns to the 80s and high humidity. When I was in junior high and high school, fall meant marching band practice and performing in the football game halftime shows and parades. Our eating didn't change too much, but my Dad loved to whip up a pot of his chili at the first sign of a cold snap. That was always a treat even if the weather wasn't that cold.

This is a weekly challenge from GeneaBloggers called 52 weeks of personal genealogy history.
All articles on this blog are © Copyright 2018 by Kathryn - Posted at 8:00 PM 0 comments

Week #46 – Politics. What are your childhood memories of politics? Were your parents active in politics? What political events and elections do you remember from your youth?

My parents usually weren't that active in politics, although they always voted in the major elections. An exception occurred when they received a letter informing them that the city was going to do housing inspections and that everyone would be required to conform to a Minimum Housing Standards Code. They were not going to grandfather in existing homes and the letter stated that they had the right to enter the premises for these inspections. If problems were found and the homeowner didn't fix them, legal action such as a lien on the house could be taken. My Dad was outraged at the thought of being forced to let someone enter our home with no cause and the thought that some could even lose their homes if they were unable to make upgrades. He mounted a successful campaign to get the ordinance overturned.

One of the elections I remember was when Nixon was reelected as President in 1972. He won in a landslide over George McGovern and everyone in my family had voted for Nixon except for one of my aunts. My parents and aunt and uncle got into a lively discussion over how she could have voted for McGovern and she finally said that she just didn't trust that "Tricky Dick"!

This is a weekly challenge from GeneaBloggers called 52 weeks of personal genealogy history.
All articles on this blog are © Copyright 2018 by Kathryn - Posted at 4:05 PM 0 comments

Week #45 – High School. Describe your middle and/or high school. Was it a large or small student body? Is the school still in existence today? How has it changed since you went there?

My junior high school was a large two-story brick building that housed classes for grades 7-9. It was not air conditioned, with the exception of the band room and could be uncomfortably hot in the Florida heat. Two new schools were opened around the time I was attending junior high. One was north of my school and the other was to the south. As enrollment in the area declined a few years after I had graduated, it was decided to close my school and to divide the students between the other two schools.

My high school was built in 1972 and was only a year old when I started there. It was a modern looking white building and the classrooms were done in an open, modular style. There was a large cafeteria area in the center of the building with options for the standard school meals or a la carte items. There were around 1200 students in grades 10-12 when I started there and about 360 students in my graduating class. The school has been expanded and a football field was added, but it looks about the same from the outside and is still going strong.

This is a weekly challenge from GeneaBloggers called 52 weeks of personal genealogy history.
All articles on this blog are © Copyright 2018 by Kathryn - Posted at 3:47 PM 0 comments

Week #44 – Elementary School . Describe your grammar/elementary school (or schools). Were they big or small? Are any of these schools still in existence today? If so, how have they changed since you went there?

I attended grades one and two at Riverview Elementary School. It was located next to Titusville High School and across from the Indian River. In addition to the view of the river, we had great views of the Apollo launches. Riverview was fairly large with several classes each of grades one to six and like most of the older schools, it wasn't air conditioned. The building is still there today, but has been taken over as part of the high school. The school was reopened with the same name in a different location.

For grades three and four, I went to South Lake Elementary. This was a newer, air-conditioned building, but despite the name, there was no water view. It was about the same size as Riverview and still exists today. I haven't been back for many years, so can't say how it has changed. For grades five and six, I went back to Riverview. We didn't move during these years, but they kept changing the school district lines.

This is a weekly challenge from GeneaBloggers called 52 weeks of personal genealogy history.
All articles on this blog are © Copyright 2018 by Kathryn - Posted at 3:25 PM 0 comments

This article was published by the Baltimore American on Sept. 20, 1918. Julius Councill was born in 1899 in Centreville, Queen Anne's County, Maryland. There are a lot of interesting details on his military service and an explanation of why he served from Pennsylvania even though he lived in Maryland. 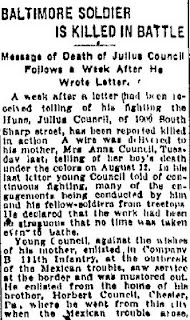 BALTIMORE SOLDIER IS KILLED IN BATTLE

Message of Death of Julius Council Follows a Week After He Wrote Letter.

A week after a letter had been received telling of his fighting the Hunn, Julius Council, of 1900 South Sharp street, has been reported killed in action. A wire was delivered to his mother, Mrs Anna Council, Tuesday last, telling of her boy's death under the colors on August 12. In his last letter young Council told of continuous fighting, many of the engagements being conducted by him and his fellow soldiers from treetops. He declared that the work had been so strenuous that no time was taken even to bathe.
Young Council, against the wishes of his mother, enlisted in Company B 111th Infantry, at the outbreak of the Mexican trouble, saw service at the border and was mustered out. He enlisted from the home of his brother, Herbert Council, Chester, Pa, where he went from this city when the Mexican trouble arose. 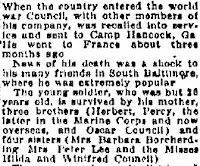 When the country entered the world war Council, with other members of his company, was recalled into service and went to Camp Hancock, Ga. He went to France about three months ago.
News of his death was a shock to his many friends in South Baltimore, where he was extremely popular.
The young soldier, who was but 18 years old, is survived by his mother, three brothers (Herbert, Hersey, the latter in the Marine Corps and now overseas, and Oscar Council) and four sisters (Mrs Barbara Borcherding, Mrs Peter Lee and the Misses Hilda and Winifred Council).
All articles on this blog are © Copyright 2018 by Kathryn - Posted at 11:02 AM 0 comments

Email ThisBlogThis!Share to TwitterShare to FacebookShare to Pinterest
Labels: Councill

Week #43 – Worst School Subject. What was your worst or least favorite subject in school and why?

My worst and least favorite subject was definitely PE or Physical Education in junior high school. I hated everything about it from the gym uniforms to sometimes being one of the last chosen for a team to the group showers. The teacher was also very strange and I'll just leave it at that! Thankfully, the classes and teachers were much better in high school and while it was never a favorite subject, at least I was able to enjoy some of it.

This is a weekly challenge from GeneaBloggers called 52 weeks of personal genealogy history.
All articles on this blog are © Copyright 2018 by Kathryn - Posted at 5:24 PM 0 comments

Week #42 – Favorite School Subject Week 42. What was your favorite subject in school and why? Was it also your best subject?

One of my favorite subjects was English and the part of it that I enjoyed was studying books, plays, and short stories. I loved to read many different kinds of literature, so this wasn't a chore for me. The English classes would often introduce me to authors that I might not have discovered on my own. It was one of my best subjects and was usually an easy A.

This is a weekly challenge from GeneaBloggers called 52 weeks of personal genealogy history.
All articles on this blog are © Copyright 2018 by Kathryn - Posted at 5:06 PM 0 comments

Week #41 – Teachers. Did you have a favorite teacher when you were growing up? What class(es) did this person teach and why did he/she make an impact on your life?

One of my favorites was my sixth grade English and history teacher. He didn't like being confined to a classroom and it wasn't unusual for us to do some of our lessons outdoors. He didn't like being confined to a textbook either and we did many reading assignments that were outside of our prescribed lessons. We did grammar lessons too, but only for one week out of each grading period when we would go outside and sit in a circle while going through the lessons. He could sense when the class was getting restless and would call a recess that made a world of difference in our attention spans. I've often wondered how he would fare in today's education system where everything seems to be geared towards having the students score well on the standardized exams.

Another favorite was my high school band director. He had a wonderful rapport with the students and didn't teach us by rote as some of my earlier band directors did. He taught us how to be able to read and play new music and he didn't accept anything less than our best efforts. He had many impacts on my life including a love of many different kinds of music, the ability to read and play music, and a love of football! The love of football comes from the many hours spent in the marching band and the wonderful spirit the band had in supporting our team. The skills I learned in high school enabled me to be accepted in the music school in college and play in the college concert band even though I didn't major in music. 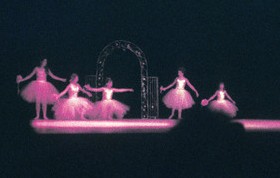 I should also mention my ballet teacher. I started dance lessons when I was eight and continued through the tenth grade. She was one of the nicest teachers I've ever encountered and taught through encouragement and constructive criticism. The yearly recitals were done in full costume and were great fun.


This is a weekly challenge from GeneaBloggers called 52 weeks of personal genealogy history.
All articles on this blog are © Copyright 2018 by Kathryn - Posted at 4:44 PM 0 comments