Week #34 – Smells. Describe any smells that take you back to childhood. These could be from meals, fragrant gardens, musty basements, or something entirely different.

We spent a lot of time at the water when I was growing up and the smells at a beach or marina take me back to those outings. One of the strongest smells I remember was from the Indian River Lagoon which sometimes has a strong and rather unpleasant sulfur-like smell from algae. The ocean air itself has a much more pleasant smell with a mix of sand, salt, marine life, and of course sun tanning lotion and oils. Marinas have that too, but add in fuel from the boats and a more pungent smell from fresh fish and bait. (and sometimes not so fresh!)

This is a weekly challenge from GeneaBloggers called 52 weeks of personal genealogy history.
All articles on this blog are © Copyright 2018 by Kathryn - Posted at 8:03 PM 0 comments

After posting some information on the death of my great-uncle Julius Councill in WWI, I received a comment from Heather of Leaves for Trees on WWI Burial Case Files. These are a set of records held by NARA that contain documentation  about a soldier's death and burial records. They also contain records listing next of kin and correspondence between the soldier's next of kin and the government regarding their final burial.

I followed Heather's instructions and wrote to the following address to request a copy of the Records of the Office of the Quartermaster General (Record Group 92) for Julius Councill:

I included all of the information that I had on Julius and filled out Standard Form 180.

I received a reply in a few days stating that they had a burial case file for Julius and that I could order the 32 pages as paper copies or on CD for $24. I selected CD on the order form and a couple of weeks later, I received paper copies of the records. Ah well, other than that, I was pleased with how quickly I was able to obtain the records!

The records contained the following information:
These records provided some new and interesting information on the WWI hero in our family and I'd like to thank Heather very much for taking the time to tell me about them!
All articles on this blog are © Copyright 2018 by Kathryn - Posted at 8:00 AM 9 comments

Week 33. Nicknames. What was your childhood nickname, and what was the meaning behind it? You can also discuss the nicknames of other family members, both past and present.

I had the common nickname of Kathy for Kathryn and sometimes was called Chatty Cathy by my father.  Growing up in the 60's and 70's, there were almost always 3 or 4 other girls named Kathy or Cathy in a class. I think variations on Kate are more common now than Kathy.

My father and grandfather had the same first name, so my father went by his middle name of Timothy, Tim, or sometimes Timbo. We used to call my great-grandmother Nanoo and my Mom's parents were Mom-Mom and Pop-Pop.  One of my great-grandfathers had the middle name of Acey and had no idea where it came from. My best guess is that it could have been a nickname for his grandfather Asa. The most unusual nickname I can think of in our family was one of my Mom's uncles that was known as Sug. I don't know where that one came from!

Updating to add that according to my Mom, her uncle Sug got the name because his mother used to call him "Sugar Baby"!. It is pronounced with an "sh" sound like sugar.

This is a weekly challenge from GeneaBloggers called 52 weeks of personal genealogy history.
All articles on this blog are © Copyright 2018 by Kathryn - Posted at 8:47 PM 0 comments


Royce Councill and Edna Willis were married on June 13, 1925 in Chestertown, MD. They were born in Queen Anne's County, MD and lived much of their married life in Pennsylvania and Delaware. They had four daughters and 14 grandchildren. The center engraving on their tombstone says "Together Forever".
All articles on this blog are © Copyright 2018 by Kathryn - Posted at 8:00 AM 0 comments

Week #32 – Dinner Time. On a typical childhood evening, who was around the dinner table? Was the meal served by one person, or was it a free-for-all? What is dinner time like in your family today?

During the work week, my Mom almost always made dinner for the family. My parents, my sister, and I usually ate at a round dinette table off of the kitchen. Sometimes my Mom served the meal and sometimes we each got our plate, depending on what we were having that night. On the weekends, my Dad often enjoyed cooking or grilling and it was more of a free-for-all. When my family gets together today, it's very informal and we often have a buffet style meal.

This is a weekly challenge from GeneaBloggers called 52 weeks of personal genealogy history.
All articles on this blog are © Copyright 2018 by Kathryn - Posted at 6:28 PM 0 comments

I recently found this ticket stub in with my some of my Dad's papers. We often went down to visit my aunt and uncle in Miami and on this trip my uncle took my Dad to the Dolphins game. I'm pretty sure it was the only NFL game my Dad ever attended and what a game!

This turned out to be the closest call in the Dolphin's undefeated season when they beat the Buffalo Bills by 24-23 on October 22, 1972 in the old Orange Bowl stadium. The Orange Bowl was one of the loudest stadiums in the NFL and a great place to see such an exciting game. Amazing that the ticket only cost $6.00!
All articles on this blog are © Copyright 2018 by Kathryn - Posted at 3:51 PM 0 comments

Week 31: Grandparents’ House. Describe your grandparents’ house. Was it big or small? How long did they live there? If you do not know this information, feel free to describe the house of another family member you remember from your childhood.

My mother's parents lived in several houses over the years in Pennsylvania and Delaware, but had moved to a retirement community by the time I remember visiting them. I remember it being a nice place with small manicured lawns and lots of flowers. They both passed away when I was fairly young, so I only remember the one visit to their house. 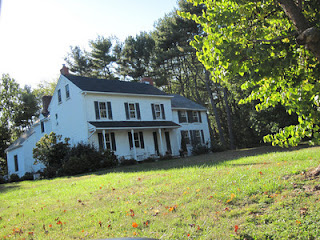 My Mom made a visit last year to see her relatives in Pennsylvania and Delaware and took this photo of a house she lived in when she was only around 2 years old in Booth's Corner, PA. 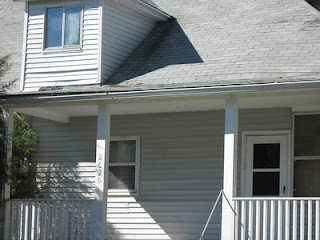 Later, she lived in this house in Ogden, PA and said that she and her sisters used to love to play in the attic.

My father's Dad and Step-Mom lived in Centerville, OH near Dayton for many years. The house I remember visiting was a small two or three bedroom house in a fairly typical suburb. I remember that it was modestly furnished and they had a lot of family pictures including pictures of me and my sister up on the walls.

This is a weekly challenge from GeneaBloggers called 52 weeks of personal genealogy history.
All articles on this blog are © Copyright 2018 by Kathryn - Posted at 9:42 AM 0 comments 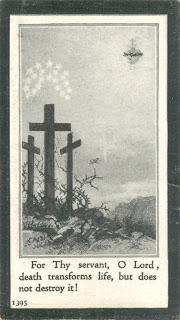 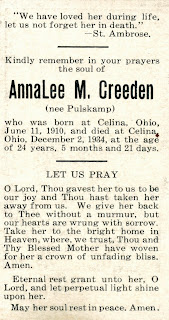 Anna Lee (Pulskamp) Creeden died in 1934 a few days after childbirth. She was married to Robert F. Creeden and was the daughter of George and Mary (Gast) Pulskamp.
All articles on this blog are © Copyright 2018 by Kathryn - Posted at 7:34 AM 0 comments

Mystery Monday - Who is she? 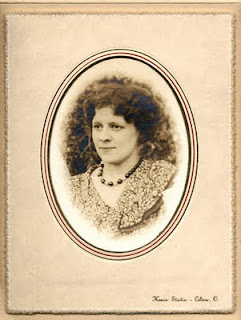 There were 2 of these in my Dad's photo collection and both are unlabeled. One was very faded, so I think it was out on display at my grandfather's or great-grandmother's house. The photo says Hearn Studio - Celina, O., so it was taken in Celina, Ohio.

Updating to add that I'm pretty sure this is my grandmother, Anna Lee Pulskamp Creeden. I found another picture of her that showed her standing and she was wearing the same outfit. The curly hair threw me off! This may have been one of the last pictures taken of her in 1934, so she would have been around 24 years old.
All articles on this blog are © Copyright 2018 by Kathryn - Posted at 8:49 AM 0 comments