I knew that my great-uncle Julius King Councill had been killed in WWI and was buried in Arlington National Cemetery, but didn't know any details. According to the 1900 census Julius was born in September 1899 in Maryland and in the 1910 census Julius was 9 years old. Both census records are from Queen Anne's County, Maryland.

Julius' WWI Registration Card is dated June 17, 1917 when Julius would have been 17. It gives his birthdate as September 15, 1895 and his age as 21. It shows that he had already served as a Corporal in the Pennsylvania National Guard for 1 year.


The Nationwide Gravesite Locator says that Julius was in Company B of the 111th Infantry, 28th Division and that his date of death was 08/12/1918. I also have a family tree written by one of my great-aunts and it says that Julius was killed in Fitz Metz, France on 08/12/1918. Doing some searching leads me to believe that this was actually Fismette, France.

I located a newspaper article about the battle where Julius died. The article goes on to say that only 17 Company B soldiers came out unassisted. Julius is listed with those killed in action in Company B. Many of the Company B soldiers were from the Chester, PA area and they suffered many casualties. 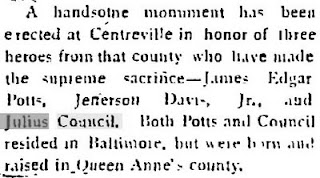 This notice about a monument in honor of Julius and two others from Queen Anne's County, MD appeared in the Denton Journal on Oct 5 1918 and was reprinted on Oct. 8, 1943.  I don't know if this monument still exists, but there is a War Memorial for all wars behind the courthouse in Centreville, MD.

A picture of Julius Councill's gravestone in Arlington National Cemetery has been posted on Find A Grave: Julius King Councill Gravestone.
All articles on this blog are © Copyright 2018 by Kathryn - Posted at 3:32 PM