One of my first posts was about my Irish Brick wall for my great-great-grandfather Timothy Creeden. The only records I have for him are after his arrival in the US and they just state his origin as "Ireland". I knew that there were other Creeden families in Clinton County, Ohio where I found my first records for Timothy, but I couldn't find any definite links to the other families.

The family I thought had the best possibility of being related to Timothy was headed by Patrick Creedan in the 1860 US Census for Clinton County, Ohio. 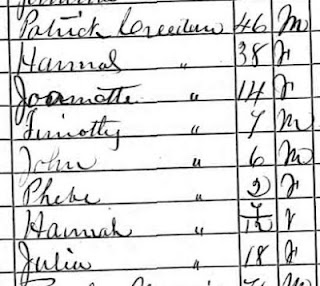 Timothy was born in 1846 and this says that a daughter Johanna/Joanette was born in 1846. The Timothy listed here was born in 1853 and the place of birth was listed as Ohio. I didn't think this was the right Timothy at first, but kept it open as a possibility. 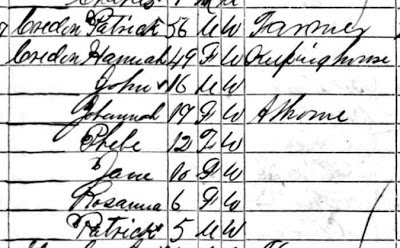 The 1870 census shows that Johannah was born around 1851, so what if Timothy and Johannah's ages had been switched in the 1860 census?

I have been unable to find Timothy's death certificate or an obituary. The church records were destroyed by fire, so I thought there might be some information in the funeral records. A couple of researchers in Mercer County found that those had also been destroyed, but mentioned that there was a probate record for a Timothy Creeden that was the guardian of a Roseanna Creeden.

I knew that FamilySearch had added Ohio Probate Records a few months ago, but I hadn't made much use of them yet. The records are not searchable, but I found that many of the volumes had an index of names. According to FindAGrave, Patrick Creedan died in June 1883, so I decided to try and find his will.

The Probate Records I found established a fairly certain link between my Timothy and Patrick's family! Patrick's will left shares to his sons Timothy, John, Patrick William and to his daughter Hannah Jane. He also left his daughter Julia's share to Timothy as her "full brother" and due to Julia being a "religious in the convent of the Sisters of Charity". He left two shares to his daughter Rosanna "in consequence of her feeble minded condition" and left his grandson Elija Bernard his daughter Johanna's share due to her being deceased.

I followed a trail of Settlement Records, Testamentary Records, and Guardian's Bonds that showed Timothy was named guardian of Roseanna shortly after Patrick's death. According to one record, the case was moved to Mercer County when Timothy moved his family and ward there around 1885. I also found the corresponding probate record in Mercer County that showed he was guardian of Roseanna.

I think this is a pretty good case that Patrick Creeden, born 1814 in Ireland is Timothy's father. The only Creedens I've found in Mercer County are Timothy, John, and their families and Roseanna. I have a note from another researcher that Patrick married Hannah Jane Hoover in 1851, so if that is correct, she was Patrick's second wife and is not the mother of Timothy or Julia. I still don't know a location in Ireland or the identity of Timothy's mother, but it is exciting to finally have a few family members for him!
All articles on this blog are © Copyright 2018 by Kathryn - Posted at 12:30 AM