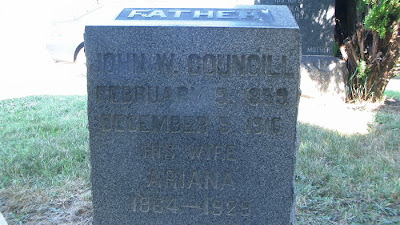 John Wesley Councill and Ariana Sparks Councill were my great-grandparents. John was the son of Francis Councill and Mary Ann Meredith. Ariana was the daughter of Samuel Sparks and Susan Godwin. They were born in Queen Anne's County, Maryland and later lived in Baltimore, MD. They are buried in the Baltimore Cemetery. Photo was posted by Anonymous on FindAGrave.
All articles on this blog are © Copyright 2018 by Kathryn - Posted at 1:07 PM