I posted earlier about finding my Godwin family in the 1850 census. It's an intriguing record since it has family members with four different surnames living together: Godwin, Sparks, Meredith, and Davis. Other families headed by Ann Sparks and Robert Sparks were living nearby.

I don't know too much about my Godwin family. I found a Maryland marriage record that said Samuel Godwin married Ann Davis on March 23, 1824 in Queen Anne's County. My uncle had put together some family trees in the 1990s and he had a note that the family came from Wales. Samuel's occupation is listed as sailor and I've wondered if that could lead to some other records.

First, I decided to see what else I could find out about the family in the census records. From their ages in the 1850 census, Samuel and Ann would have been born around 1795 and 1804. I didn't have any luck finding Samuel or Ann in the 1860 census. Samuel and Susan Sparks are living on their own by then.

A search for Sam* Go*dwin in the 1850 census for Queen Anne's turned up 4 matches, all born in Maryland. 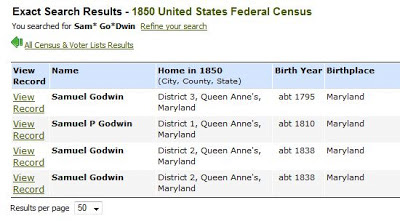 From their birth years, the last 2 Samuels would have been around 12 in the 1840 census, so I would not expect to see an entry for them. That leaves my Samuel and a second Samuel with the middle initial "P". My Samuel is in District 3, while Samuel P. is in District 1. Both families had 1 child living with them in 1850, but Samuel P.'s was a newborn.

The same search for 1840 turned up two Samuels.

This time, there is a Samuel with no initials and one with a middle initial of Z. Someone on Ancestry added Samuel T. Godwin as a correction to Samuel Z. Godwin. 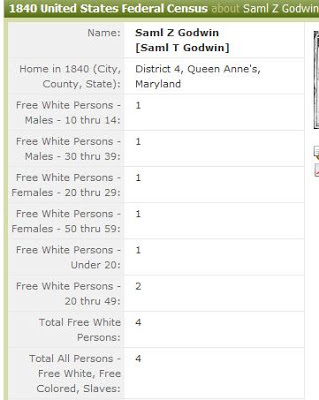 I did one final search in Maryland for all Godwins or Goodwins and still didn't find a match. The 1840 census is tough since it doesn't list family members and it's possible that they were living with another family. In my next searches, I'll see if I can track down some of my other Queen Anne's surnames in 1840 and also see if I have any luck finding Samuel's neighbors from 1850 in the 1840 census.
All articles on this blog are © Copyright 2018 by Kathryn - Posted at 1:58 PM