Amanuensis Monday - Down on the Farm

This is from an entry for Timothy Creeden in the 1880 census for Clinton County, Ohio for Schedule 2 - Productions of Agriculture. This was one of the non-population schedules taken in 1880. I hadn't seen this on previous searches in the census and had no idea this much detail was captured about the farms. It gives quite a bit of insight into what my 2x great-grandfather's farm was like. 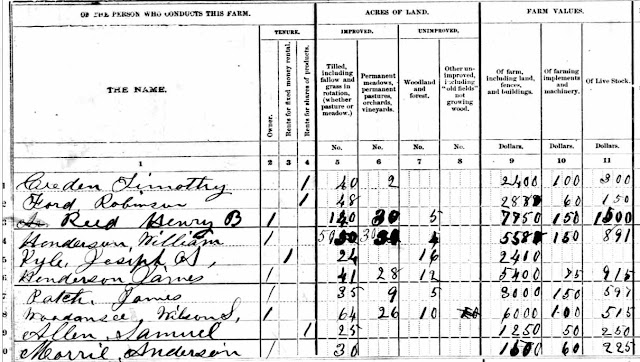 The first section captures the names and information on the acreage and value of the land. Timothy's data was on line 1 of the census form and continues on that line throughout. He was renting 42 acres of land, 2 of which were orchards. The farm was valued at $2400, with $100 in farm equipment and $300 in livestock. The rent was paid from a share of the farm's production.

Timothy spent $5 repairing fences and paid a farmhand a total of $15 for 2 1/2 weeks of labor during 1879. The total of all production for the farm was $600. He had two acres of grasslands and 2 horses. 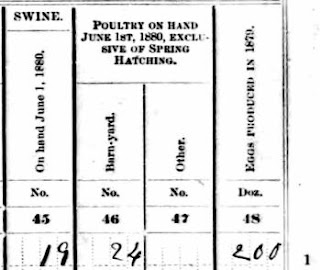 Timothy had 19 swine, 24 barn-yard chickens and 200 eggs were produced.

1/2 acre was used to produce 50 bushels of Irish potatoes.

Timothy used 2 acres of land for an apple orchard. The orchard had 50 apple trees that produced 15 bushels of apples. The total value sold from the apple orchard was $5. 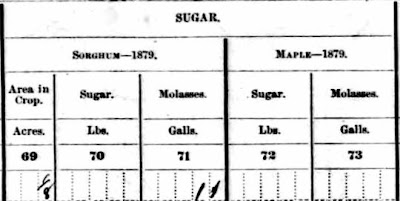 1/8 of an acre was used to produce 11 gallons of sorghum molasses.

I was surprised at the variety of crops on the farm. It looks like they produced enough food to feed the family and bring in some income, although it's hard to say how much of the income went back into the farm. Timothy and his wife Mary Ann had four young children at this time, so they must have done an incredible amount of work themselves to support the farm.

Amanuensis Monday is a daily blogging theme which encourages the family historian to transcribe family letters, journals, audiotapes, and other historical artifacts.
All articles on this blog are © Copyright 2018 by Kathryn - Posted at 7:00 AM