This brief death notice for my great-grandfather John Wesley Councill was published in the Baltimore Sun on December 6 and 7, 1916. He was born on February 9, 1859. A picture of his gravestone is on FindAGrave.
All articles on this blog are © Copyright 2018 by Kathryn - Posted at 2:14 PM 0 comments

When I started researching my great-grandfather's brother Edward Creeden, I found possible records for him in the Army, Marines, and Canadian Expeditionary Forces, but doubted that they were all the same Edward. In my last post on Edward, I detailed the records I received from NARA which showed that it was my Edward in the Army and Marines records. The birth date, next of kin, and physical description in the Canadian records matched, so I decided to go ahead and order them.

The Edward in the Canadian records is definitely my Edward! In addition to his brother Charles, he listed next of kin as his sister Julia Creeden in Pueblo, CO and his brother Joshua in Celina, OH. When he enlisted he gave his birthplace as Erie, Ontario, but on one of the forms in his Canadian service records, he gave Celina, OH as his birthplace. The package I received had 77 pages and a good amount of new information:

Creedon, Edward city of Newport, section 68, grave 496, Date of Death 2-14-1937, age 54, Undertaker: M C & Roll, Place of Death: Newport Hotel. Ironically, the cemetery has a section for veterans, but Edward is not buried in that section.

So, Edward's life ended on another mystery. What was he doing in Kentucky? I haven't been able to find him in the 1930 census so far. He certainly traveled around the world, so he could have been anywhere then! From Ohio, he went to Pueblo, CO with his sister Julia and then on to Salt Lake City, UT where he enlisted in the US Army. He was in the Philippines for four years and discharged in Porter, NY. Other locations listed were Monterey, CA, San Francisco, and Puget Sound, WA, St. Louis, MO, and Kansas. He went to Minnesota and Canada and then served overseas in England and France in WWI. There are still a few mysteries surrounding Edward, but I knew next to nothing about him before obtaining his military records from NARA and the Library and Archives Canada site. It's been very interesting to see how much information is available in the military records.
All articles on this blog are © Copyright 2018 by Kathryn - Posted at 8:00 AM 0 comments

Week #40 – Trouble. What happened when you got into trouble as a child? What was punishment like in your home?

I don't remember my sister and I doing anything that required drastic punishment, but when we did get into trouble we got a stern lecture and sometimes we were sent to our room. That was more of a punishment than it might be today since there were no phones, TVs, computers, or iPods in our rooms back then!

This is a weekly challenge from GeneaBloggers called 52 weeks of personal genealogy history.
All articles on this blog are © Copyright 2018 by Kathryn - Posted at 11:53 AM 0 comments

Week 39. Least Favorite Foods. What was your least favorite food from your childhood? Did your parents make you eat it anyway? Do you still dislike the same food today? How have your tastes changed since your youth? 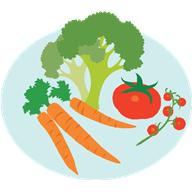 Like many kids, I wasn't fond of eating my vegetables. My parents would coax me and my sister to try new things, but they wouldn't force us to eat it. Many times we discovered that we actually liked it. I like most vegetables now, but still don't care for lima beans or peas that much. One thing I didn't like as a child was anything with dill or any kind of condiment - ketchup, mayonnaise, mustard, etc. I like the tomato based ones now, such as salsa and ketchup, but still can't stand mayonnaise, mustard, or dill. The aversion to mayonnaise is probably a blessing since most things with it are so high calorie!

This is a weekly challenge from GeneaBloggers called 52 weeks of personal genealogy history.
All articles on this blog are © Copyright 2018 by Kathryn - Posted at 8:41 PM 0 comments