Sister Mary Felix was the sister of my 2x great-grandfather Timothy Creeden. Her name was Julia Creedon before she took her religious vows with the Sisters of Charity in Cincinnati in 1872. This article appeared in the Wilmington Clinton County Democrat on February 28, 1918. 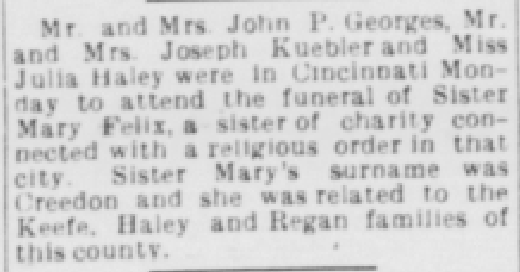 Mr. and Mrs. John P. Georges, Mr. and Mrs. Joseph Kuebler and Miss Julia Haley were in Cincinnati Monday to attend the funeral of Sister Mary Felix, a sister of charity connected with a religious order in that city. Sister Mary's surname was Creedon and she was related to the Keefe, Haley, and Regan families of this county.

I found two more articles about Sister Mary in the Clinton County Democrat that provided more names. These articles were a great find since I finally have some proof of links between my Creeden family and other families in Clinton County. I had noticed before that there were quite a few Creedens in Clinton County and they were all from the same area around Macroom and Clondrohid in County Cork, Ireland. 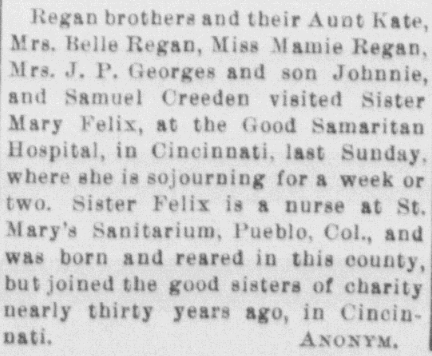 The above article was in the Clinton County Democrat on July 27, 1899, a few months before Timothy Creeden's death. An article about Timothy's illness said Timothy was visited by his niece, Mrs. Isabelle Regan and from the July 1899 article, the Regan family was in touch with Sister Mary too. Rosa Belle Regan was the daughter of Timothy's sister-in-law Elizabeth Matson, although I'm wondering if there is a Creeden link to them too. Mamie Regan was the daughter of Rosa Belle and Thomas Regan.

There is a Kate Regan in the 1880 census living with her parents Bat. and Julia Regan in Clinton County. In later census records, Kate is living with her brother Patrick Regan and it doesn't appear that she ever married. She might be the Aunt Kate mentioned in the article.

Mrs. J. P. Georges is mentioned in both articles. From records on FindAGrave, she was Louise Catherine Kuebler Georges and was the wife of John Peter Georges. Louise was the daughter of  Francis Xavier Kuebler and Janie Eulia George. Francis was the brother of Joseph P. Kuebler who was married to Julia Keefe. According to the 1915 History of Clinton County, Julia Keefe's grandparents were John Keefe and Johanna Creedon, so there is at least one link between the Creedons and Keefes. Johanna Creedon would be about the right age to be an aunt of Sister Mary Felix, but that's just a guess.

I couldn't find any records for Samuel Creeden, so that one's a mystery for now. I think the Miss Julia Haley mentioned in the first article may be a granddaughter of John Haley and Catherine Creedon. John's parents were Dennis Haley and Julia Creedon. Catherine was the daughter of Timothy Creedon and Hanora Creedon and they were married in 1854 in Clondrohid Parish, County Cork, Ireland. This Timothy died in 1865 shortly after the family arrived from Ireland.

Clondrohid Parish is where Julia was baptized and it's interesting that a Honora Creeden was a sponsor at her baptism. Timothy and Hanora's marriage record and Sister Mary's baptism records were found on the RootsIreland site. The rest of the information on these Creedons is from trees available online, so I'll have to do more investigation to verify the information.

One more article about Sister Mary Felix appeared in the Clinton County Democrat on July 8, 1914.

Mrs. J. P. Georges is mentioned again along with Miss Leonie Regan. Leonie was another daughter of Rosa Belle and Thomas Regan. The Sisters of Charity told me that Sister Mary worked at St. Mary's Hospital in Pueblo, CO from 1888-1902 and St. Vincent's Hospital in Santa Fe, NM starting in 1905. They didn't have any other information on her assignments, so it's possible that she was working in Fayetteville in 1914. That was only one county over from Clinton County.

These articles provide more evidence that Timothy Creeden and Sister Mary Felix were brother and sister and also provide some good clues on the links to other families in Clinton County, Ohio. I'd love to hear from anyone researching the Haley, Keefe, Regan, or Creeden families from Clinton County.
All articles on this blog are © Copyright 2018 by Kathryn - Posted at 11:57 AM