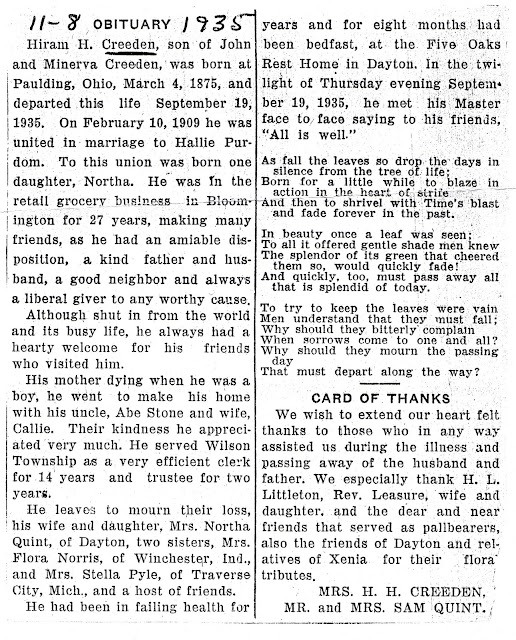 OBITUARY
Hiram H. Creeden, son of John and Minerva Creeden, was born at Paulding, Ohio, March 4, 1875, and departed this life September 19, 1935. On February 10, 1909 lie was united in marriage to Hallie Purdom. To this union was born one daughter, Northa. He was in the retail grocery business in Bloomington for 27 years, making many friends, as he had an amiable disposition, a kind father and husband, a good neighbor and always a liberal giver to any worthy cause.
Although shut in from the world and its busy life, he always had a hearty welcome for his friends who visited him.
His mother dying when he was a boy, he went to make his home with his uncle, Abe Stone and wife, Callie. Their kindness he appreciated very much. He served Wilson Township as a very efficient clerk for 14 years and trustee for two years.
He leaves to mourn their loss, his wife and daughter, Mrs. Northa Quint, of Dayton, two sisters, Mrs. Flora Norris, of Winchester, Ind., and Mrs. Stella Pyle, of Traverse City, Mich., and a host of friends.
He had been in falling health for years and for eight months had been bedfast, at the Five Oaks Rest Home in Dayton. In the twilight of Thursday evening September 19, 1935, he met his Master face to face saying to his friends, "All is well."

As fall the leaves so drop the days in
silence from the tree of life;
Born for a little while to blaze in action in
the heart or strife
And then to shrivel with Time's blast
and fade forever in the past.

In beauty once a leaf was seen;
To all it offered gentle shade men knew
The splendor of its green that cheered
them so, would quickly fade!
And quickly, too, must pass away all
that is splendid of today.

To try to keep the leaves were vain
Men understand that they must fall;
Why should they bitterly. complain
When sorrows come to one and all?
Why should they mourn the passing
day
That must depart along the way?

Hiram's father John Creeden was the half-brother of my 2x great-grandfather, Timothy Creeden. I found a shorter obituary for Hiram Creeden published on Sept. 21, 1935, but it didn't provide many details. It is interesting that this one was published on November 11, 1935, a few weeks after his death. I'm not sure of the newspaper, but would guess that it was from his hometown paper in Wilmington, Clinton County, Ohio since it mentions Wilson Township where he was a clerk.

The obituary answered my question of whether or not Hiram's father John Creeden was also the father of Flora and Stella. There was almost a 20 year gap between Hiram and Stella's birth, so it's possible that they had different mothers. However, I've seen the mother of the daughters given as Minerva on other records.

I hadn't seen the names of Abe and Callie Stone before, so I'm not sure if they are related to the Creedens or to Minerva's side of the family. The sad poem is by Edgar Guest.
All articles on this blog are © Copyright 2018 by Kathryn - Posted at 1:11 PM