The theme this week is "Bridge." A bridge connects two things that are separated, whether it's land or people (maybe even time?).

I'm going to use this prompt to write about land records for tracts of land called Woodbridge and Bandon Bridge in Cecil County, Maryland. Bandon Bridge was granted to Darby Noland and Woodbridge to Dennis Nowland.

My Nowland ancestors came from Ireland to Maryland in the 1600s and settled in Cecil County. I'm still sorting out some of the relationships, but my current Nowland tree is shown below. Dermond and Dennis are thought to have been born in Ireland. Dermond's wife Anne is referenced as Anne Browning/Browne in some of the land sale and probate records, so she most likely remarried to a Browning. The Browning name is also mentioned in the Rent Rolls for the land. 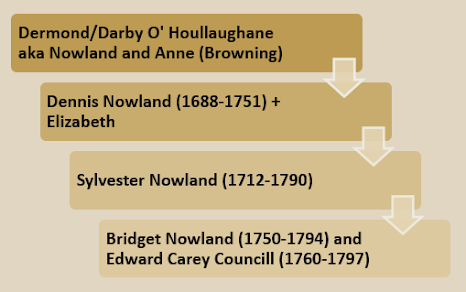 The book Settlers of Maryland, 1679-1783. Consolidated Edition has the following entries for Dermond and Dennis: The book is available on Ancestry.com.

Note that the entry for Dennis Nowland should be for Woodbridge and not Moodbridge. I included the entry for Pierce Noland since he was in Cecil County at the same time. He sold his land without developing it and settled in Virginia. His will didn't mention Darby or Dermond, so I don't know if they were related.

The record states: "Patent to Dennis Nowland of Cecil County, son heir at law and devisee of Dermond O'Houllaughane aka Nowland late of the said county for a tract of land lyeing in the said county called Woodbridge originally laid out in the year of our Lord 1680 for one David Mackinna for two hundred acres and by him conveyed to one Cornelius Machneahin? and the Dermond in Joint Tenancy with said Dermond being the survivor became possessor of the whole."

The names given in the Woodbridge record are interesting and I'm guessing spellings may have been mangled. I can't find any references to the surname O'Houllaughane, although I found a few with similar spellings. Darby can be a nickname for Dermot, so Dermond might not be the correct spelling either. An index of Irish surnames from 1659 lists Holaghan,    Hologhane, Hologhan and O Hollahan and a Hoolihan name study lists variants for Ó hUALLACHÁIN including Nolan.

I found a little more history of Woodbridge on page 200 of The History of the Society of Jesus. The text states that David Mackenny sold Woodbridge to Darby Nowland and that his son Dennis sold the land to James Heath.

I was able to find more about the Nowlands in the rent rolls, land sales and probate records for Cecil County, so I'll follow up on those records in future posts.