The following obituary was published in The Cincinnati Post on 11/21/1901.

William Creeden, 37, a carpenter living at 3554 Haven Avenue, Avondale, died late Wednesday at the City Hospital from injuries received by being struck Monday night by a Zoo-Mt. Auburn car at Vine and Shields Streets. His skull was fractured, and he never regained consciousness. He leaves a wife and three children. Coroner Schwab is investigating. Creeden will be buried Saturday morning at Reading, O., near which place he was born.

This is one of the William Creedens that I've been researching in the hopes of identifying the correct families for each of them. This is a quick tree I've done for this William on Ancestry.com: 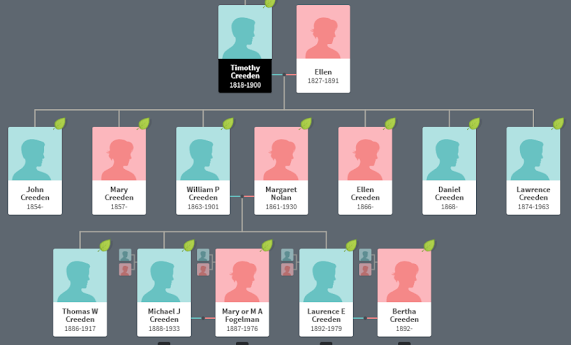 A baptism record shows that William was born on 22 Feb 1863 and baptized on 15 Mar 1863 at the Sts. Peter and Paul Church in Reading, Hamilton County, Ohio. The parents were given in Latin as Timotheus Creeden and Helena Callaghan. One of the sponsors was John Creeden.

William married Margaret Nolan on 31 May 1883. There is a note on the marriage license where his father Timothy gives his consent for the marriage. The civil record is shown below. A church record shows that the marriage was at Sts. Peter and Paul Church in Reading, Ohio and one of the witnesses was Daniel Creeden. 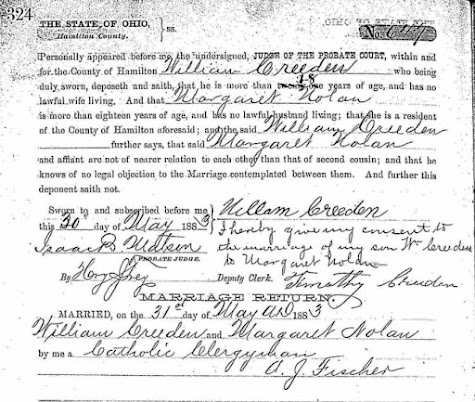 After William's death in 1901, Margaret appears in several Cincinnati city directories and is named as his widow.

Margaret eventually moved to California where her son Lawrence and other relatives lived. She lived there until her death in 1930.

Updating to add that none of the records I have show the middle name or initial for this William. I think I can rule him out as being my Patrick William or the William Patrick Creeden that went to Kansas.

Sunday's Obituary is a prompt developed by Leslie Ann at Ancestors Live Here.