The Clinton County Newspaper Abstracts for 1835-1885 has an entry dated November 16, 1882 for the death of a Father O'Donahue. The entry states that Father O'Donahue had charge of the local Catholic church and that in the previous week he had been struck on the head by Timothy Green of Morrow, Ohio. It said that his skull was badly crushed.

My great-great-grandparents Timothy Creeden and Mary Ann Matson were married by Father John B. O'Donaghue in December 1868 in Clinton County, so I was curious to see if I could find more out about him and how he came to such a tragic end. The newspaper abstracts list marriages by a Father O'Donaghue after 1882, so I also wondered if there was a second O'Donaghue or if there was an error in the dates.

They certainly went through some tough times! Father John B. O'Donaghue rode on horseback between several parishes and oversaw the erection of the first St. Columbkill church building only to have the roof torn off by a cyclone in 1868. His murder in 1882 sounds like such a random event and must have been a shock to the community. A second cyclone took the roof off of the building in 1893 while Father Michael was the pastor, but the parish rallied around the pastor and repaired and enlarged the church and rectory. From the History of Ohio by C.B. Galbreath: 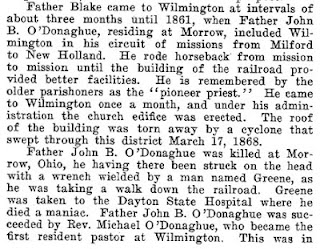 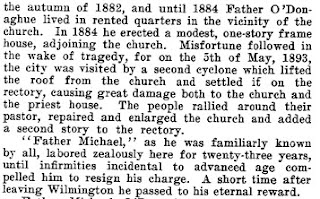