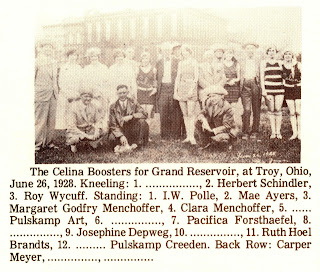 My father remembered stories about his mother being a swimmer and participating in events at Grand Lake near Celina, Ohio, but didn't have any details. I was lucky enough to find the picture above that includes my grandmother and her twin sister in their Celina swimsuits!  The picture shows The Celina Boosters for the Grand Reservoir near Celina, Ohio on June 26, 1928. My grandmother Anna Lee Pulskamp Creeden is on the far right in this photo and her twin sister Emma Lee is #5. I found this picture in the Celina, Ohio Sesquicentennial book by Joyce Alig of the Mercer County Historical Society and Joyce kindly gave me permission to post it.

This excerpt is from an article in the Lima News, published on July 15, 1928, shortly after the picture was taken. The one-day tour on which the Celina Boosters Friday visited 12 Ohio and Indiana cities, proved an efficient method for spreading publicity and accumulating good will for Celina and especially Grand Lake and the parks... The initial stop was at Rockford. The delegation then proceeded to Ohio City, Van Wert, and Decatur, Ind. The Celina band gave concerts at each city. At Decatur, the party was served ice cream at the Cloverleaf creamery. Sounds like quite a party!


The picture above is from Wikipedia. Grand Lake was constructed as a reservoir for the Miami and Erie canal and at one time was the world's largest man-made lake. The park has been a popular place for boating, hunting, fishing, swimming and picnicking for many years. More pictures and info on the park are here.

Sports Center Saturday is a series suggested by Susan Petersen of Long Lost Relatives.
All articles on this blog are © Copyright 2018 by Kathryn - Posted at 1:07 PM