This obituary was published in Irish World on July 22, 1899. Daniel Creedon was born around 1819 and died at the age of 80 on June 16, 1899. The obituary mentions that his remains were taken to Clondrohid (in County Cork, Ireland), so it is possible that he is a relation to my Creeden families. The Patrick Creedan I have been researching was born in 1814 and his children were baptized in Clondrohid. 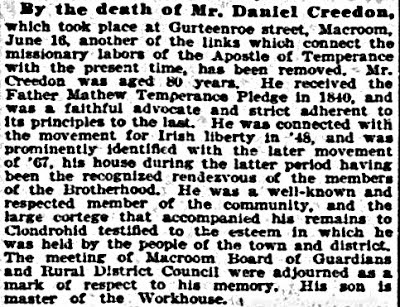 By the death of Mr. Daniel Creedon, which took place at Gurteenroe street, Macroom, June 16, another of the links which connect the missionary labors of the Apostle of Temperance with the present time, has been removed.  Mr. Creedon was aged 80 years. He received the Father Mathew Temperance Pledge in 1840, and was a faithful advocate and strict adherent to its principles to the last.  He was connected with the movement for Irish libery in '48, and was prominently identified with the later movement of '67, his house during the latter period having been the recognized rendezvous of the members of the Brotherhood.  He was a well-known and respected member of the community, and the large cortege that accompanied his remains to Clondrohid testified to the esteem in which he was held by the people of the town and district. The meeting of Macroom Board of Guardians and Rural District Council were adjourned as a mark of respect to his memory.  His son is master of the Workhouse.

In the Irish 1901 census, a Timothy Creedon lived on Gurteenroe Street in Macroom and his occupation is given as Master of the Workhouse. In Guy's Postal Directory of 1914, Timothy is still listed as Master of the Workhouse and Daniel Creedon is working there as a clerk.
All articles on this blog are © Copyright 2018 by Kathryn - Posted at 2:31 PM