When I did some "to do" lists for my 2x-great-grandparents, I realized that I didn't know anything about Anna Marie Schaefer other than her name. I'm not even entirely sure which version of her name is correct. I've seen Anna Marie, Mary Anna, and other variations and I've seen her last name spelled "Schaeffer". Whichever one is correct, in most of the records I've seen, she went by Mary.

I knew that she married Herman Henry Pulskamp around 1854 and they lived in Celina, Ohio. I have a family tree from a Pulskamp cousin that says she was born on November 17, 1833 in Hanover, Germany. The 1880 census agrees with that data and shows that she was 46 years old and that she and her parents were from Hanover. My great-grandfather George is listed as "Geo" and is 7 years old.

Mary's husband Herman was also from Hanover.  I've noticed as I've researched my German ancestors that many of the census records actually give a location, while records for my Irish ancestors never say anything but Ireland! I suppose some of that had to do with changing territories and borders in Germany.

A Google search turned up a match in A Portrait and Biographical Record of Mercer and Van Wert Counties, Ohio, published in 1896. The biography was about one of their sons, John Bernard Pulskamp, but included a bit of detail on Herman and Mary. The biography gives her year and place of marriage as 1854 in Cincinnati. It also states that she came to the US in 1848 and lists the seven children that were living in 1896. 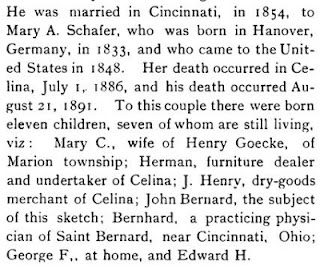 With the info that Mary came to the US in 1848, I found a possible match in a passenger list for the Mary Adeline that arrived from Bremen, Germany on August 15, 1848.

A census entry for 1850 in Crawford County, Ohio appears to be the same family, so it's a possibility that this is Mary's family.

I also checked some online family trees, but didn't find anything definite for her parents. She was only 52 when she died and one tree mentioned that she died of consumption. I'm still not sure who Mary's parents were, but at least I have a few clues to follow up on now.