John Franklin Matson was the brother of my great-great-grandmother Mary Ann Matson and was one of four brothers to go into the Civil War. He was born around 1841 in Clinton County, Ohio. He enlisted in Company G of the 79th Regiment of Ohio Volunteers in 1862 and was wounded in 1864. I have seen several family trees that gave his date of death as 1864, but he survived the war and I was able to find him in several records after that. I was curious about John since he seemed to be close to my Creeden family.

This Civil War pension index shows that John filed for his pension in 1879 and his widow Lavina filed in 1896. 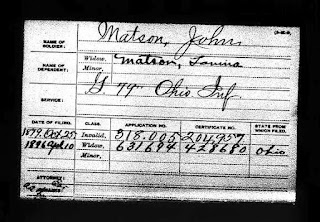 In 1890, John was still living in Mercer County, Ohio and was listed in the Special Schedule for Surviving Soldiers, Sailors, and Marines in the 1890 Census. Under Disability Incurred, it says "wounded hand". 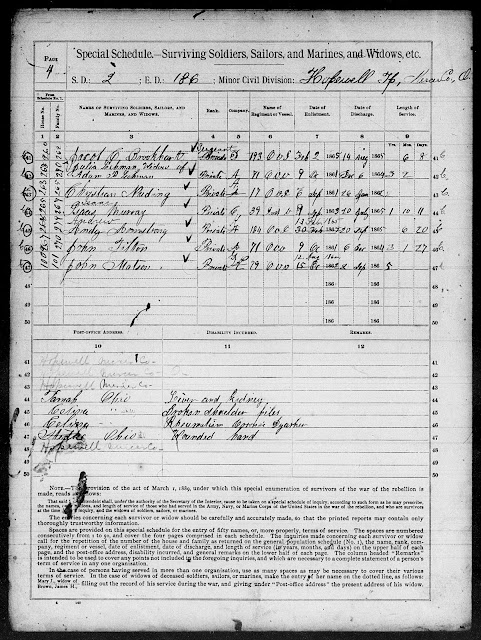 The most interesting record I found was in a listing of headstones provided for Civil War Veterans. In 1879, the US Congress passed an act stating that the government would erect gravestones for Union soldiers buried in private cemeteries and John was one of the recipients of this. John is buried next to Timothy's son James Creeden in row 19 of the Old Buck Cemetery in the Hopewell Township of Mercer County, Ohio. According to a transcription for his grave, it simply states Jno Matson Co C 79 Ohio Inf. Other records indicated that he was in Company G, so I am not sure if that was a typo or perhaps the grave is hard to read. The record gave his date of death as March 5, 1896. 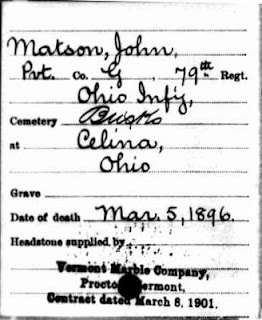