The 1900 Atlas of Mercer County, Ohio published by J. E. Hamburger & Co. contains a picture and short biography of my 2x great-grandfather, Henry Niehaus. When the atlas was published, he was the Street Commissioner of Celina, Ohio. 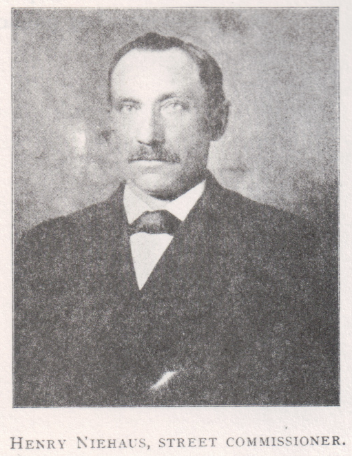 Henry was born in 1854, so he would have been 46 or younger when the picture was taken. This is by far the best picture I've seen of him.

The biography reads: HENRY NEIHAUS was born on the twenty-fourth day of September, 1854, in Amt Wildeshausen, Germany. On the twenty-fifth day of January he was united in marriage to Anna (Rohrer); to them were born the following named children: Katie (deceased), Waldburga, Agnes, Anna, Bertha, and Caroline. He is at present serving as street commissioner of the village of Celina, Ohio.

Another small mention of Henry gives his middle initial as "H" and says that he "keeps clean the streets and crossings". I haven't been able to find out how long Henry held the position of Street Commissioner. The 1900 census is the only one that gives "Street Commissioner" as his occupation.
All articles on this blog are © Copyright 2018 by Kathryn - Posted at 12:30 AM