The 52 Ancestors prompt for this week is "Heirloom". Is there a special item that's been passed down in your family?

We don't really have any heirlooms that have been passed down for generations, but we do have some more recent things from my grandparents that will be passed down. I'm also very fortunate to have some photographs on both sides of the family dating back to the 1800s.

One of my more recent finds is a portion of a ledger kept by my great-grandfather George Pulskamp. I was contacted by someone that used to live in the house George lived in on Walnut St. in Celina, OH. In the 1970s, she found a couple of ledger pages up in the attic that had George's name on them and she saved them just because she thought they were cool. She found me through my blog and offered to send the pages to me. It was a lovely gesture and I'm thrilled to have something of George's in our family! 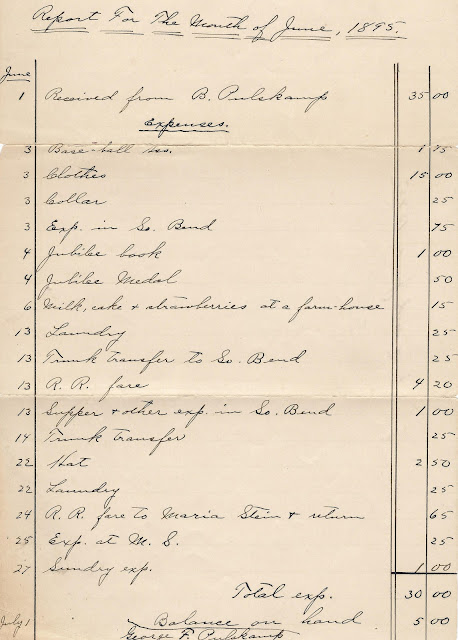 The page above is from a ledger George was keeping to track his expenses in 1895. He went on to become a newspaper publisher and printer, so it looks like he was a natural businessman. The page pictured is dated June 1895 and shows that he received $35 from B. Pulskamp at the start of the month. The entry might be referring to Beatrice Pulskamp.

The rest of the lines show his expenses for the month and his signature at the bottom. The interesting thing about the entries is that they detail a trip from South Bend, Indiana back to Maria Stein, Ohio. George was attending Notre Dame University during that time, so this was most likely a trip home for the summer.

George spent quite a bit of his budget on clothes, including $15 on June 3, plus a collar and something for baseball that I can't quite make out. I wonder if he had a summer job waiting for him at home.

On June 4, he bought a Jubilee book for $1 and a Jubilee medal for 50 cents. Notre Dame's Golden Jubilee celebration was on June 11-13 of 1895, so he probably attended some of the celebrations before heading home.

On June 6, he spent 15 cents for strawberries, cake, and milk at a farmhouse. I bet that was delicious!

It looks like he started his trip home on the 13th of June. There were expenses for a trunk transfer and supper in South Bend. His biggest expense was his railroad fare which cost $4.20. There was another trunk transfer on the 14th and then a railroad fare of 65 cents to Maria Stein. It's such an interesting glimpse into George's life during his college years. This is indeed a very cool thing to have and to pass down in the family! Much thanks to Brenda S. for taking the time to research someone connected to George and to send the ledger pages to me.

I wrote about some other heirlooms in previous posts:

#52Ancestors is a series of weekly family history prompts developed by Amy Johnson Crow.
All articles on this blog are © Copyright 2018 by Kathryn - Posted at 11:12 PM

Email ThisBlogThis!Share to TwitterShare to FacebookShare to Pinterest
Labels: 52 Ancestors in 52 Weeks, Pulskamp