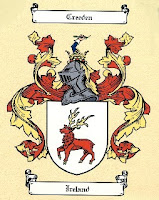 Creedon is an Irish surname and is seen most often in Country Cork, Ireland. There are many variations in spelling such as Creeden, Creedan, Credon, but in Ireland, the name is now almost always spelled as Creedon. The Irish spelling of the name is Críodáin (O'Críodáin or Mac Críodáin). The name has sometimes been abbreviated as Creed. My great-great-grandfather Timothy Creeden was born in 1846 in County Cork, Ireland and settled in Clinton County, Ohio by 1868 when he married Mary Ann Matson. My family continues to use the Creeden spelling.

The earliest origins of the name may have been in Northern Ireland. From the Book of Irish Families, Great & Small by Michael C. O'Laughlin: According to "Keatings History", the name is given to the chief of the parish of Magheramisk, in the barony of Massareene, in the province of Ulster.

A similar reference is in "Irish Pedigrees; or, the Origin and Stem of the Irish Nation" by John O'Hart, Fifth Edition, 1892: Down and Part of Antrim, THE Chiefs and Clans of Ulidia, and the territories they possessed in the twelfth century, as collected from O'Dugan's Topography, are as follows:-- ... 9. O'Criodain (Credan, Creden, and Creed), chief of Machaire Maedhaidh, now the parish of "Magheramisk," in barony of Massarene.


From an article by Joe Creedon, owner of the Creedon Hotel: The name of O’Criodain (or possibly MacCriodain) seems to have derived from an eminent early Bishop called Cridan. He was buried in 638 AD on Island Mahee in Strangford Lough in nearby County Down.
See complete article here: Uibh Laoire Families - Creedons 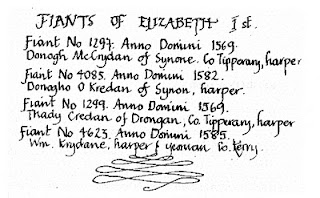 There are several early references to Creedon harpers in the Fiants of Elizabeth.

From Joe Creedon: One court where they were welcomed was that of FitzGerald of Cloyne. He was a distinguished member of the family of the Earls of Desmond, who for some time lived at Castle Martyr Castle. In 1621 AD there were two Creedon Harpers at his court, Patrick and Jeremiah. One of the harps which they played survives to our time.

From "More Irish Families" by Edward MacLysaght:
"CREEDON, Creed, a West Cork name, is now called O'Criodain in Irish (i.-e. Tomas O Criadain the 19th century Gaelic-Irish scribe) but formerly and properly it was Mac Criodain... Creedon has been abbreviated to Creed to a considerable extent - even as early as 1659 when Francis Creed was a titulado in the parish of Kilquan, Co. Limberick.  About that time the name occurs as Mac Creed in the Irish army lists preserved in the Ormond manuscripts. Both Creed and Creedon appear in the marriage licence bonds of the diocese of Cork, Ross and Cloyne from 1682 and among the names of larger landowners in Co. Cork in 1878. In 1866 there were 40 Creedon, Creedan and Creeden births registered (37 in Co. Cork) while Creed was only 8, the figures for 1890 were Creedon 15 (all Co. Cork or near) Creed 9 (5 Co. cork). In the Macroom districts, where these names are most numerous, cases have been recorded of their synonymous use by one family in registering births."

The earliest Creedon reference I have seen in the US is for a Cornelius Creden, born in the 1750's in Massachusetts. He is listed as a wagoner in Soldiers and Sailors of the Rev. War. Comp. By Secy. Of the commonwealth, Ms. Boston. The earliest Catherine Creeden I have seen is from Record of Indentures of Individuals Bound Out as Apprentices, Servants, etc. City of Philadelphia, October 3, 1771 - October 5, 1773, where she was listed as an indentured servant.

As you can see, I've collected a few Creedon crests along the way. I wouldn't put too much stock in any of them being authentic, but they're fun to look at!

Questions on the origins of the name remain. Are the Creedons connected to the distinct Creed surname or was the name simply abbreviated to Creed? Another variation that occurs in early Ireland and the UK is Credan. Are they connected?  I would love to hear what other Creedon or Creed researchers think.
All articles on this blog are © Copyright 2018 by Kathryn - Posted at 1:25 PM