I posted earlier about an obit card from the Mercer County, Ohio library for Roseanne Creeden and decided to follow up and see if they had the actual obituary. I was surprised to find that there was an article in the newspaper since Roseanne's guardian Timothy Creeden died in 1899 and her parents were listed as unknown on her death certificate. I knew from the 1900-1920 census records that Roseanne had been confined to the county infirmary for a number of years. She died on June 30, 1922. While the obituary states that she was a lifelong resident of Celina, I know from other records that she was born in Clinton County, Ohio to parents Patrick Creedan and Hannah Hoover. 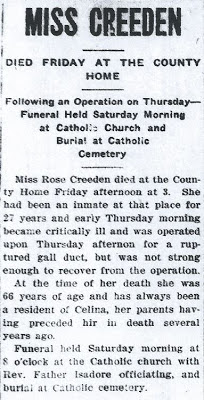 DIED FRIDAY AT THE COUNTY
HOME

Miss Rose Creeden died at the County Home Friday afternoon at 3. She had been an inmate at that place for 27 years and early Thursday morning became critically ill and was operated upon Thursday afternon for a ruptured gall duct, but was not strong enough to recover from the operation.
At the time of her death she was 66 years of age and has always been a resident of Celina, her parents having preceded hir in death several years ago.
Funeral held Saturday morning at 8 o'clock at the Catholic church with Rev. Father Isadore officiating, and burial at Catholic cemetery.

The obituary was published in The Standard, Celina, Ohio on Friday, July 7, 1922. Thanks to Ken of the Mercer County Library for looking it up for me.
All articles on this blog are © Copyright 2018 by Kathryn - Posted at 12:00 AM