I first got interested in the Keefe family from Clinton County, Ohio while looking at the Creedon references in the 1915 History of Clinton County. I found an article that mentioned a Johanna Creedon married to John Keefe with children Timothy, Mary, James, Hannah, Patrick, and Julia. All of these names also appear in my 2x great-grandfather Timothy Creeden's family in Clinton County.


The article in the history was about Joseph Kuebler and Julia Keefe. Julia was the daughter of James and Ann (Shea) Keefe, both natives of Ireland. Julia's grandparents were John Keefe and Johanna Creedon who came to America in April, 1858. James and Ann Keefe were both born in 1844.

The passenger list shown above is from the Constantine arriving in New York in May 1858. It shows a John and Johanna Keefe with a younger Pat, Honora, and James. They were all listed as being from Ireland with a destination of Ohio. That looks like a possible match, but where are Timothy, Mary, and Julia? 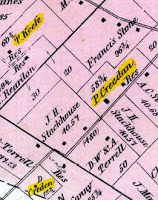 An 1876 atlas of Clinton County, Ohio shows that T. Keefe's property is very close to my 3x great-grandfather Patrick Creedan's land. I figured the families at least knew each other even if they weren't related.

When I found my 3x great-grandfather Patrick Creedan's will, there was a definite connection to the Keefe family. The executor of his will was Timothy Keefe and one of the witnesses was Bridget Keefe. Now I was really interested! I wondered if Johanna (Creedon) Keefe could be a sister or other relation of Patrick since they would be in the same age range.

I did a search on the RootsIreland.ie site for John Keefe and Johanna Creedon and found one possible match. John O'Keeffe was married to Johanna Creedan on February 23, 1830. Witnesses were William, Denis, and John Creedon and the marriage was performed in Clondrohid parish, County Cork. This is the third Creedon family in Clinton County with ties to Clondrohid! The first is my Patrick Creedan and the second is a note from another researcher that a Hannah and Timothy Creeden were married in Clondrohid in 1854. This Timothy died at sea on the passage to America in 1865.

I searched for children born to John and Johanna Keefe to see if they were a match for the Clinton County couple. I found the following baptisms listed: Patrick (1836), twins Julia and Peter (1840), Honora (1842) , and James (1844). I still didn't find anything for Timothy or Mary, but there was a Peter baptized on the same day as Julia. Patrick was baptized in Macroom and the O'Keeffe spelling was used. The other children were baptized in Kilnamartyra which borders the Clondrohid parish. Macroom is also a few miles away from Clondrohid. With those records, I can fill in a little more information on the family.

With the Creedan and probable Clondrohid ties, this family definitely needs more investigation. I'll follow up with posts on what I've found in the Ohio census and vital records for the Keefe families. Johanna and John are living with Timothy Keefe in some of the census records, so I have found a link to their son Timothy. This is a new family for me, so I'd love to hear from anyone else researching the Keefe families.
All articles on this blog are © Copyright 2018 by Kathryn - Posted at 2:44 PM