This is Page 2 of the Matson family research from correspondence between researchers in 1903. The most interesting bit on this page is the conclusion that the early Matson settlers in Pennsylvania were of Swedish origin and that the name will be difficult to trace due to the lack of hereditary surnames. 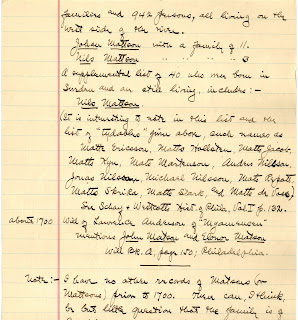 This list contains 188 families and 942 persons, all living on the west side of the river.
John Mattson with a family of 11.
Nils Mattson     "   "     "      "   3.
A supplemental list of 40 who were born in Sweden and are still living includes: -
Nils Mattson
(It is interesting to note in this list and the list of "tydables" given above, such names as Matte Ericsson, Matts Hollster, Matts Jacob, Matts Kyu, Mats Martenson, Audres Nilsson, Jonas Nilsson, Michael Nilsson, Mats Rupats, Matts Skrika, Matts Stark, and Matts de Vase.)
See Scharf & Wescott's Hist. of Phila., Vol I p 132. 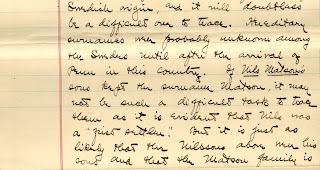 Note: - I have no other records of Matsons (or Mattsons) prior to 1700. There can, I think, be but little question that the family is of Swedish origin, and it will doubtless be a difficult one to trace. Hereditary surnames were probably unknown among the Swedes until after the arrival of Penn in this country. If Nils Matson's sons kept the surname Matson, it may not be such a difficult task to trace them as it is evident that Nils was a "first settler." But it is just as likely that the Nilssons above are his sons and that the Matson family is (continued on 3rd page) descended from one or more of the Matte, Matts, or Mats given above.

Amanuensis Monday – An Amanuensis is a person employed to write what another dictates or to copy what has been written by another. Amanuensis Monday is a daily blogging theme which encourages the family historian to transcribe family letters, journals, audiotapes, and other historical artifacts. Not only do the documents contain genealogical information, the words breathe life into kin – some we never met – others we see a time in their life before we knew them. A fuller explanation can be found here. Amanuensis Monday is a popular ongoing series created by John Newmark at Transylvanian Dutch.
All articles on this blog are © Copyright 2018 by Kathryn - Posted at 6:00 AM